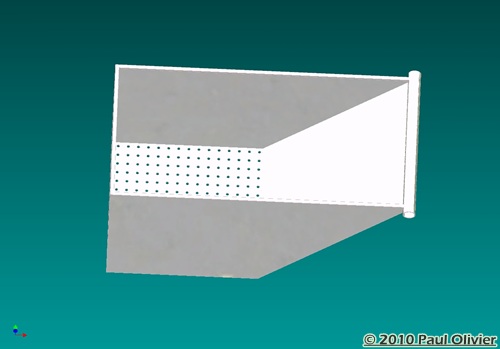 Believe it or not, one of the most popular posts on this entire site happens to be one that has nothing to do with worm composting! Go figure.
It seems that more than a few of you have a keen interest in Black Soldier Fly Larvae (BSFL) as composting organisms – and I certainly can’t fault you there. I myself find the topic to be quite fascinating as well. I think the only thing that’s really held me back from actually trying this approach out is the fact that I live in a relatively cold climate (where you don’t find naturally occurring BSFs).

The post I was referring to above is “Vermiman’s DIY BSFL BIN“, which was posted about a year and a half ago and STILL continues to receive new comments (68 in total, as I write this post). Some of you may recall that the initial interest generated by the post, and the connection I made with Dr. Paul Olivier (who I must apologize to for mistakenly referring to as “Dr. Paul Oliver”) – a well known BSF expert. As a result of this connection, I posted a YouTube video version of a intriguing powerpoint presentation that Dr. Olivier put together (you can view it here: “Black Soldier Fly Larvae – Revisited“).

Anyway – long story short, I have been recently thinking about adding more BSFL content here at RWC, and strangely enough someone sent me an email the other day informing me that Dr. Olivier had some publicly available plans for a DIY BSFL system. I e-mailed Dr. Olivier directly and he provided me with more info (and some images). As such, I thought this would be the perfect time to launch a new “Soldier Fly Larvae” category on the blog, where I’ll add all future posts on the topic.

Here is a link to the PDF plans for this system: DIY BSFL Bin

Hopefully some of you Do-It-Yourselfers with an interest in BSFL composting will give this system a try. If you have any questions/comments be sure to post them here. If Dr. Olivier’s contribution to previous discussions here is any indication, I have little doubt that he’ll be more than happy to field any questions and take part in any discussions that result from this posting.

Vermicompost and the Valentine’s Day Philodendron