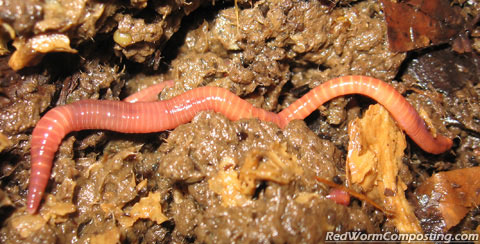 During my recent worm transfer I was reminded of the fact that red worms really do like it wet. The older bin I was harvesting the worms from is the same one used for the squash composting experiment and was absolutely loaded with worms. There were so many in there that they were starting to congregate in writhing masses at or near the surface. Any time I added food it was disappearing very quickly.

I just assumed that all the worms in the bin were just up near the surface. Well as I discovered, there were actually loads of worms all throughout the bin. Especially interesting was the fact that I found lots of worms (and cocoons) right down at the very bottom of the bin, where conditions were extremely wet, and borderline anaerobic. This was one of my simple Rubbermaid bins with no drainage – in fact all it has is a few air holes in the lid.

Obviously I’m not sharing this information to convince you that you don’t need to be careful with moisture levels in a bin – you still do. It was soaking wet down in the bottom of my bin, but it wasn’t flooded. Also, as much as the worms do love wet conditions, it is more difficult to produce quality compost. Decomposition slows down and you don’t get that nice rich, dark humus that is produced via aerobic composting. Having drainage holes (and some sort of catch tray or reservoir) is not a bad idea.

Anyway, just thought I’d share that tidbit with you.
8)