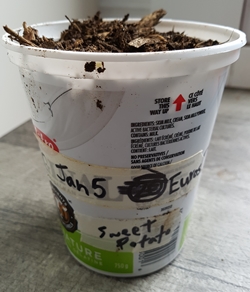 Back in the middle of January I wrote about the “Tiny Tub” system I had set up (earlier in Jan) for two “rescued” European Nightcrawlers.

Finding these Euros was very exciting since I was starting to think I didn’t have any of these worms left, and…well…two is all you need to start building a new population!

Today I decided to assess the situation, and then moved the Euros/cocoons/habitat material to a 1 gal bucket system I set up a couple of days ago (wanted to let it “brew” a little bit before adding the worms). I’m sure they would have continued to do fine in the yogurt tub, but I want to make absolutely sure I am providing them with enough space and food/habitat to really thrive. This also means I won’t need to think about another system upgrade for at least a few months. 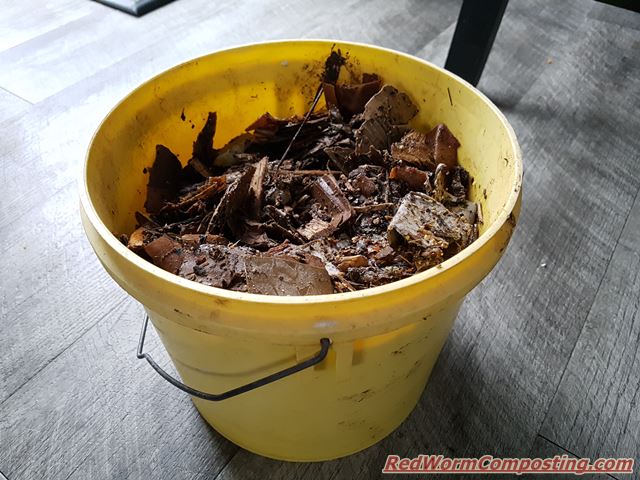 The two Euros looked like they were still in good shape. It’s amazing to think back to how tiny they were when I rescued them from the neglected bin (in case anyone is wondering – Canadian dimes are the same size as U.S. dimes). 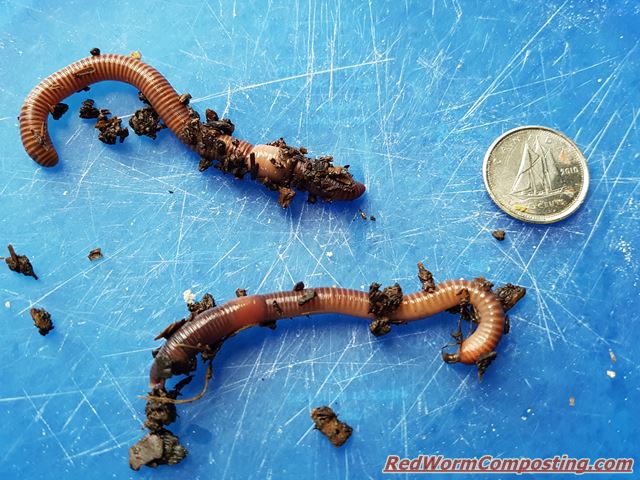 I mentioned in my last update (“Day 9”) that I saw “5 or 6 cocoons”. Today I performed a more extensive search and found a grand total of 26 cocoons. Of those, I feel confident that 17 are Euro cocoons. There were also some smaller cocoons that might be Red Worm cocoons (that happened to be in the material used to set up the original tub) – plus a very tiny one that is clearly from another species (I have found a fair number in the horse manure I’ve been using – pretty sure I know what kind of worms they are, but need to do some more investigating).

Also worth noting that I did find ONE tiny hatchling (may have missed some others). Time will tell what kind of worm it is.

In the image below you can see the Euro cocoons closest to the dime. Three of the ones over to the right may be Red Worms. I have added a red arrow to point out the really tiny cocoon I’m quite sure is from another species altogether. 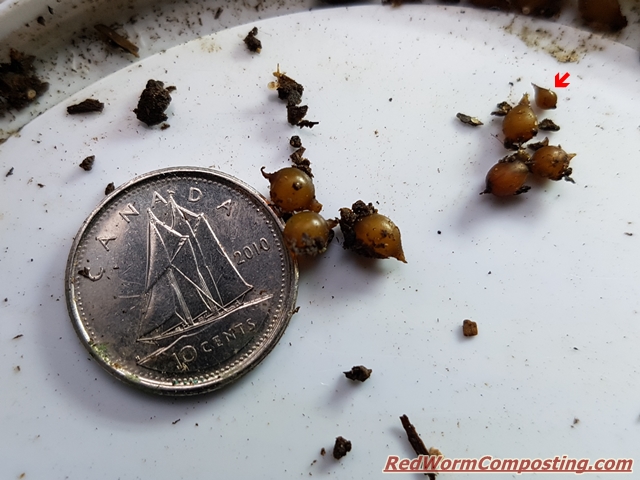 The key will be to let them hatch out and grow for a bit. Once they are older juveniles it should be fairly easy to ID them.

Today was “Day 34” – so almost 5 weeks in. The 17 cocoons would translate into ~ 1.7 cocoons per worm per week. That being said, some of the smaller cocoons may simply be small Euro cocoons. And if the hatchling is a Euro that likely accounts for another cocoon as well (Euro cocoons tend to release a single hatchling).

Again – time will tell! But for now, I’m just happy to see us headed in the right direction. I suspect the population will do even better in this new system.