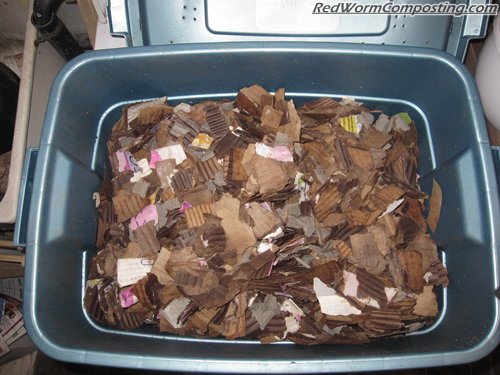 50 Cocoon Challenge cardboard-only system – looking almost exactly the same as when we began!

I’m sure some of you must be wondering what on earth is going on with my current “50 Cocoon Challenges” (cardboard & straw) these days.

Believe it or not, I actually found a baby worm in the cardboard challenge bin a few days after getting it set up (and of course, had every intention of writing about it! haha), but not a whole lot has changed in the bin since then. There ARE a few more tiny worms out and about now, but I was unable to find any larger worms – let alone adults! One of the difficulties associated with using corrugated cardboard is that I have no idea how many worms might be living inside some of the pieces (Red Worms LOVE to wiggle into the channels that run through the middle of this material). The cardboard itself doesn’t really seem to be decomposing at all. I thought for sure that we’d at least see some sort of fungus setting up shop, but if this IS happening, it certainly isn’t obvious!

The straw challenge bin seems to be showing a similar lack of decomposition (again, I was definitely expecting to see at least some fungal mycelia in there). The straw does appear to be a fair bit darker in color, but that’s about it. 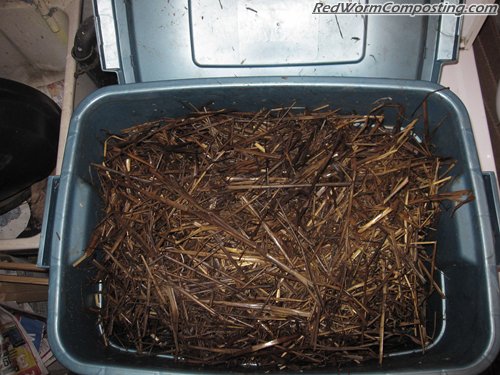 What’s interesting though, is that there definitely ARE some larger worms in the straw bin. I was not able to locate any adults yet, but found at least 3 or 4 (might have counted one of them twice) worms that were similar in size to those added to my “four worm reproduction experiment“. 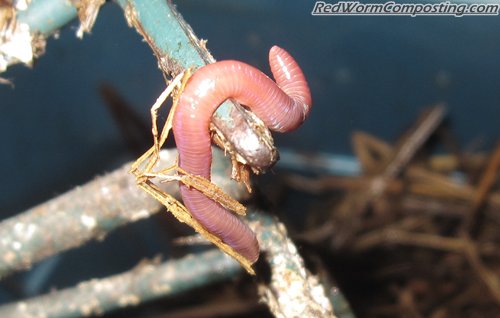 One thing is for sure – there won’t be worms in either one of these bins maturing as quickly as those in either my manure challenge, or my original food waste challenge systems. I can’t say I’m too surprised! We are talking about high C:N materials here, so neither are going to be able to support the same sort of microbial biomass (and thus food value) as those other two.

I am still definitely interested to see what happens in these systems over the long-haul though!
8)