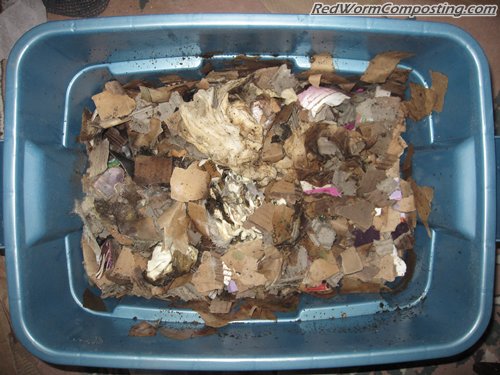 Contents of the “Four Worm Reproduction Experiment” nicely decayed and ready for worms!

After 26 days of worm bin “aging”, I finally decided to get my new “Four Worm Reproduction Experiment” officially up and running today.

Needless to say, everything is looking (and smelling! haha) nice and…uhhh…RIPE in the bin, so there is little doubt that we are more than ready for some vermicomposting action!

In my last post I mentioned that it’s often not a bad idea to open your bin up a number of times during the aging process so you can mix everything up a bit and add water and/or new bedding as needed. I actually haven’t really done much with this bin, but today I did do a bit more mixing and also decided to add a small amount of water as well – just to get things as close to (my version of) “perfect” as possible.
🙂

Next, of course, I added the four worms! 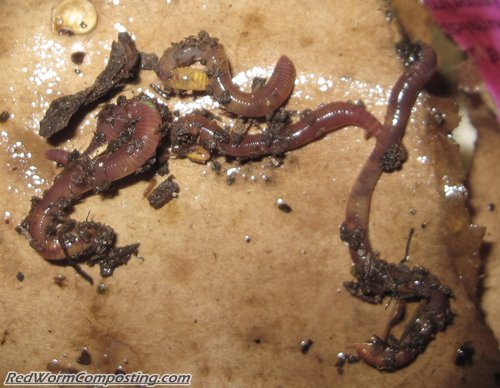 Four young worms – let’s see what they can do!

Just as I did in the original Four Worm Reproduction Experiment, I selected four vermi-youths (those without a clitellum) so as to ensure that ALL future worms are the result of reproduction that has occurred in this system. Adult worms can carry sperm around for quite some time, and will use it to fertilize many new ova (thus leading to production of quite a few cocoons) until such time as the supply runs out.

Anyway, I will probably now leave the worms to do their “thing” for awhile before providing another update. There is more than enough for them to eat, and while it might be interesting to see how quickly they mature, there really won’t be much else to report on for at least a few weeks I’m sure.
I’ll keep everyone posted!
8)