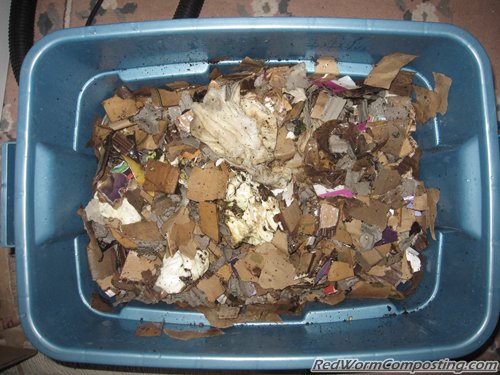 Mixed up, moistened and ready to brew some more!

Crazy week, but I just wanted to provide a quick update on my new “Four Worm Reproduction Experiment“. I decided to open up the bin today to see how things were looking so far.

This has been a really important reminder of the fact that the one KEY piece of information I left out of my two “setting up a worm bin” YouTube videos revolves around what to do with the bin during the aging period. I’m sure a lot of people have just assumed that simply leaving it be will be the best thing to do – and this helps to explain why I’ve received so many emails about excess mold growth and really stinky bins during this time!

Anyway, unless your plan is to leave the bin sitting for months without worms, I would strongly recommend opening it up at least a couple of times before the worms arrive. This will be a good opportunity to mix everything up and spray it down as well (again making sure never to add some much water that it ends up pooling in the bottom). This way you are helping to create a more homogeneous habitat, adding more oxygen into the mix, and your helping to create a more evenly moist environment.

I’ve decided to really take my time with this bin, so I will likely just do the same thing next week (open, mix and moisten), although I may also add some new bedding at that time as well). The week after that will likely be my worm-stocking week. There’s no rush here, and I really want to make sure the habitat is in good shape!

The bin smelled pretty bad when I first opened it up, due to the fact that there was a lot of water-rich waste materials concentrated in certain parts of the bin. With things spread out more, and my weekly mixing, I’m sure it won’t be quite so ripe by the time the worms are added.

Anyway – that’s basically it for now!
I’ll keep you posted!
8)