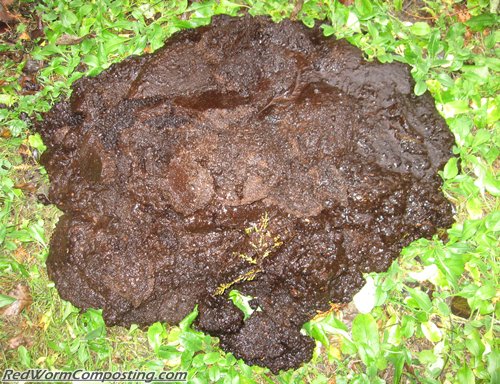 Wet, sloppy coffee grounds sludge from bins sitting outside at my dad’s place

I’ve been meaning to write this post for quite some time now, and finally tracked down the photos this evening. Some of you may recall my original “Coffee Grounds Conundrum” post, in which I outlined some of the ways that coffee can tend to be a rather unpredictable vermicomposting food material.

Well, I’m happy to report that I’ve encountered a situation even MORE baffling than those described last time!

Early in December, my dad and I made an effort to start transporting some of the rotten straw bales from last year’s winter worm composting bed over to my place so I could use the material for my winter worm windrow.

Remembering that my dad also still had a significant quantity of coffee grounds sitting out in his yard (in bins), I decided it might not be a bad idea to take that material back home as well (coffee seems to be really effective in terms of helping to generate heat). The bins that the grounds were sitting in were completely open to the elements, so needless to say the grounds themselves were basically a stinky anaerobic sludge.

Here’s where things get bizarre…

As soon as we started digging into the material (in order to transfer it to the bins I’d be taking home) we started finding concentrations of Red Worms. Not just any ol’ run-of-the-mill Red Worms either – most of them were BIG!
They certainly weren’t distributed throughout the grounds, but the fact that there were any in there at all is pretty mind boggling! 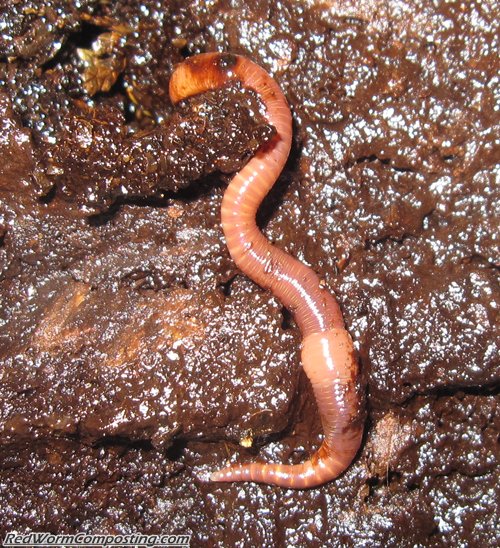 Here’s the real kicker though – we have NO clue how the worms got in there in the first place. My memory is a little hazy now, but I KNOW for sure that at least one of the containers was a heavy duty plastic garbage can with no holes in it whatsoever.

The only thing I can imagine is that the shovel I used to fill the can with grounds (before transporting to my dad’s place) had some Red Worm cocoons on it and they eventually hatched in the material. That might explain why the worms were able to survive in such nasty conditions (when they hatch into a given environment they tend to be much better able to adapt than when they are introduced as adults).

Anyway – I just thought this was really intriguing, and certainly worth sharing…even a month later!
🙂