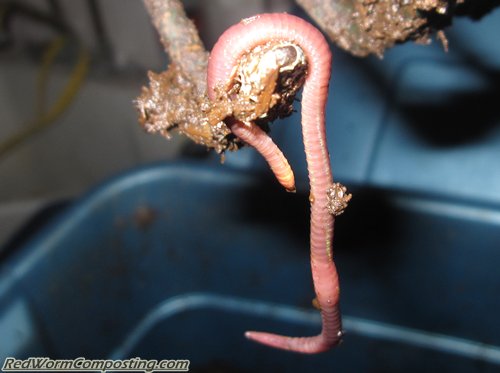 Yet another challenge that has been overdue for an update!
🙂

Well, as you can see, our horse manure bin does indeed have adult worms – and some of them are quite large – but all in all, I’ve ended up quite surprised by the results of this experiment.

As you may recall, I predicted that cocoons would hatch more quickly and that worms would mature more quickly in manure-based system. I’ve seen how fast a population of Red Worms can grow in a manure heap, and how readily these worms will move into aged manure when it’s added to a worm composting system, so I figured that this would be close to the optimal situation for these cocoons.

Interestingly enough, the results of this trial didn’t seem to differ all that much from the food waste trial – in fact, if anything, I would say that the population growth has been a lot more successful in the food waste system. Unfortunately I don’t have exact stats for you, but I know for sure that the cocoons in the manure bin took a fair bit longer to hatch than those in the regular bin – this is a big part of why there haven’t been any updates. I just kinda got tired of looking in the bin and still not finding any baby worms!
😆

I am also quite sure that the hatching success in the manure bin has not been as high as in the other bin. Even when I did finally start seeing baby worms, it seemed really difficult to track down more than two or three at a time. Yesterday when I was digging around in the bin quite a bit I probably found less than ten worms total!

I started the manure bin on or close to July 14th, and have only recently (this week) been able to find mature worms. I would say with a fair degree of confidence that once again, worms only started to mature around the 5-6 week mark. So, despite the fact that the population as a whole doesn’t seem to be doing as well in this system, there are still some worms maturing in the same amount of time as those in the food waste bin.

I will be interested to see how things develop in coming months. I’d like to harvest the entire population in both bins after say 6 months or so (from start date of each system), and really compare numbers – adults, babies, cocoons.

Something else I would also like to try is setting up a combo bin that has aged manure AND food waste / cardboard to see what happens there.

As far as the other bin goes, things seem to be moving along in there very well. There are a LOT of adults, along with plenty of juveniles and cocoons as well.
8)