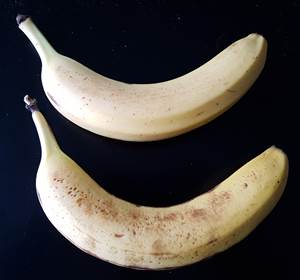 Last week, while in research mode, I came across some information that (at the time) seemed to suggest that microorganisms in vermcomposts can produce ethylene (which can serve as a plant hormone).

Ethylene made me think of fruit ripening in general…and banana peels in particular. I remember a plant biology prof in university sharing a little trick involving the placement of a banana peel in a bag with a plant cutting so as to speed up the sprouting of roots. He said it was because of the ethylene the peel released.

The idea of vermicomposts maybe producing ethylene (will come back to this later) made me curious to know if a banana sitting in vermicompost would ripen even more quickly. So, me being me, I decided to set up a fun little experiment last Thursday (4 days ago) to find out.

I recently harvested my Worm Inn Mega, so a brief session with my DIY screening tube left me with some beautiful material to work with!

The experimental design was ridiculously basic (and ‘un-scientific’). I started by selecting two fairly greenish bananas from a batch I had recently purchased. 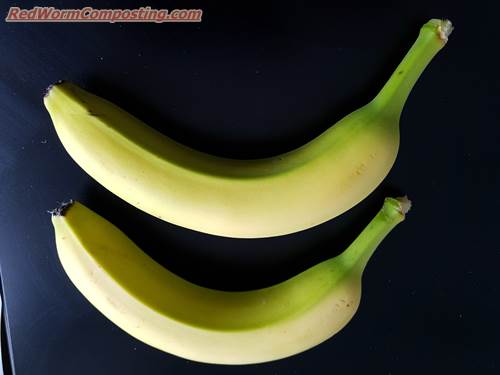 Each of these was then placed in its own shallow tray. One tray was simply lined with a garbage bage, while the other one was partially filled with screened vermicompost. I was originally going to completely bury the banana in the vermicompost treatment, but then decided to leave the upperside exposed. 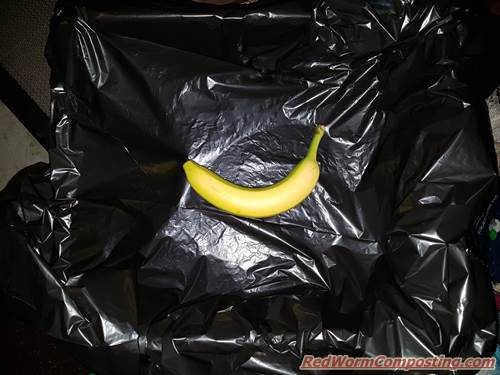 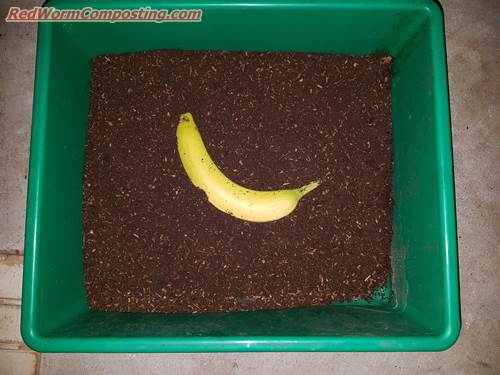 I all but forgot about the whole thing until this morning, when I noticed that our banana supply was getting a bit low (hahaha).

What I discovered in the trays really surprised me!

The banana in the vermicompost (top one in image below) had not ripend as much as the banana sitting in the empty tray (bottom banana in picture below). 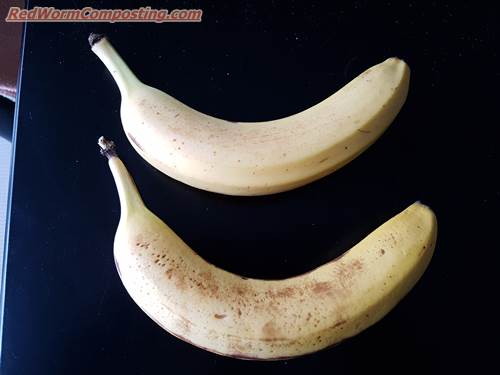 What’s interesting is that the exposed side of the vermicompost banana was a bit more mature than the underside (I flipped the banana over for this next pic). The opposite was true of the banana in the empty tray (lower banana again showing the side that was originally face down). 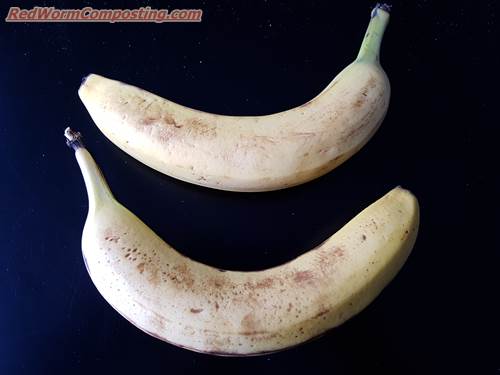 This seemed to suggest that not only are microbes NOT boosting ethylene concentrations, but they may actually be somehow lowering the concentration of the gas underneath the banana.

Interesting sidenote: the other bananas from the same batch I originally purchased (all about the same level of ripeness originally) – which have been on a banana hanger over top of a fruit bowl (with apples in it) are even more ripened (picture below doesn’t clearly show this, but it’s true I promise! haha) than those from the experiment! (Makes sense, since undoubtedly a higher ethylene concentration from all those fruit sitting together) 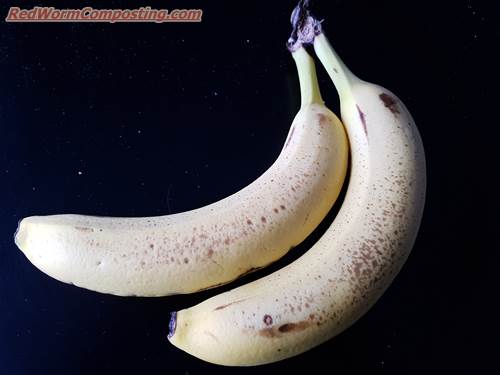 Back to the ethylene removal (by vermicomposts) idea…

A bit of searching on Google Scholar quickly confirmed my suspicion. Here is the very first entry for my “ethylene, vermicompost” search:

Spoiler Alert (no pun intended – haha)…vermicomposts have been determined to be a “promising” bio-filter material for ethylene degradation.

Well that certainly puts a new spin on things!
😆

I know composts (including vermicomposts) can be very effective bio-filter materials – but I had no idea they were being tested for ethylene absorption.

In some ways this all seems really counter-intuitive, doesn’t it??!

We know that vermicomposts are rich in aerobic decomposer microbes, so you might almost expect the banana to start rotting a lot more quickly than one simply exposed to air.

Naturally, all this has made me wonder about fruit ripening in general. Would apples (for example) stay in better shape for longer if they were sitting in a tub of vermicompost instead of a typical fruit bowl?

I know I, for one, get pretty frustrated as I watch our apples become less an less appealing (thus less and less likely to be eaten by the kids) with each passing day. It would actually be very handy to have a way to keep them in good shape for longer!

Needless to say, I will be investigating this further.
Stay tuned!

P.S. Almost forgot…when I went back to find the passage I had been reading last week, supposedly about ethylene production in vermicomposts, I realized it was actually just a general comment about the fact that ethylene is one of a handful of plant hormones that microbes (in general) can produce. Lucky little bit of misreading I guess! hahaha