I wanted to share a quick update about my progress with the Urban Worm Bag so far.

It’s been nearly a week since I first set it up and, as is often the case when starting up a brand new system (especially with a bin I haven’t used before), I am taking a very mellow approach so far.

Basically just letting the worms settle in while monitoring conditions.

As I joked in a recent message sent to the e-mail list, if a Worm Inn and a plastic worm bin had offspring you might end up with something like an UWB!
😉

It seems to have great moisture retention, while still offering excellent air flow (especially with a couple of tweaks).

One of the things I wanted to be careful about early on was overheating. This is a good sized system, and if I had added too much food right off the bat I know I would have ended up with some unhappy (maybe even dead) worms.

I was very happy to recently find my long-stemmed composting thermometer, and it has already played an important role! I’ve left it sitting in the corner at all times, with the probe extending into the heart of the system. Temperatures have stayed up around 30 C (86 F) – a wee bit higher than the “ideal” I am after, but far nicer than the sub-20 C (below 68 F) ambient temps down in the basement right now. 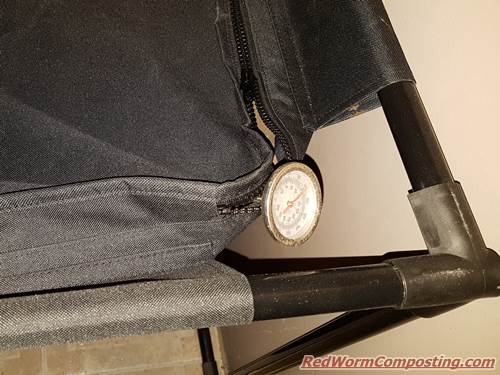 What’s interesting is that by opening the lid zipper up a bit more I’ve been able to cool things down a little – so now temps are more like 26 C (78.8 F). The added bonus is that I also have even better air flow.

One other tweak has involved opening up the zipper at the bottom a little. More and more I am loving this zippered pocket! Unlike with the Worm Inn, I can very quickly check moisture levels in the false bottom (has remained at “wrung out sponge” level so far, which is exactly where I want this zone to be).

Leaving it open just a little provides air flow at the bottom, which should help to keep the worms moving upwards with the newer waste materials. 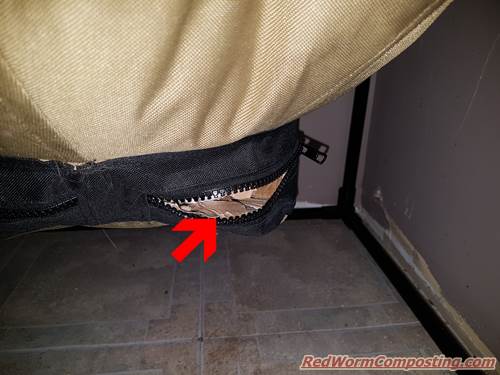 The worms seem very healthy and active, and the overall level in the bin seems to have gone down. I am also happy to see isopods moving around in the system, which is a good sign that it is not “too wet” (they rarely do well in typical plastic, enclosed bins). 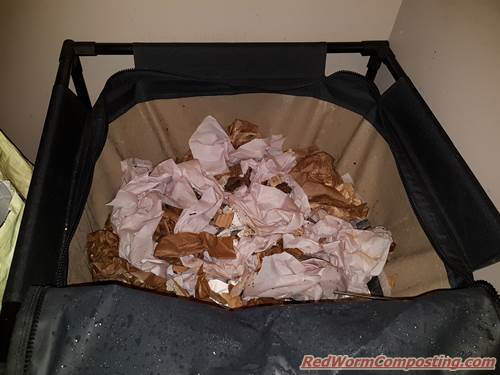 I put a big bag of frozen kitchen scraps out to thaw, and will likely feed the system either tomorrow or the next day.

Will more than likely post another update sometime next week.
😎