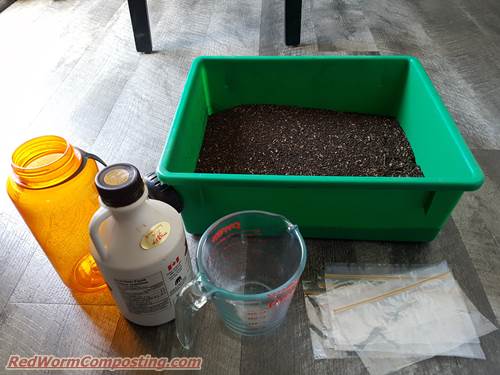 Worm castings tea is always a hot topic of discussion (and debate) in the worm composting world. Two of the BIG sub-topics that tend to get people fired up are: 1) aerated vs non-aerated teas, and 2) amended vs non-amended teas.

Naturally, a lot of people feel that if you don’t aerate tea (or if you do but then just let it sit) you will end up with…well, basically anaerobic, phytotoxic nastiness. Yet over the years I have had multiple people claim they have left tea to sit for extended periods with NO problems – no stink, and still beneficial for the plants.

I’ve never really ended up too caught up in the arguments for either side. To me – like so many other facets of vermicomposting – it is yet another “it depends” situation.

YES – it is absolutely true that if you have a lot of aerobic organisms in a liquid (or even very wet) environment with no additional oxygen inputs, and you give them food, a stinky unsavory situation will likely develop.

For me the big question has always been…

“Can a ‘tea’ extract made from high quality, stabilized worm castings and water sit for extended periods without any aeration?“

I’ve always suspected the answer is YES – but even if so, the next question is whether or not this extract will be beneficial for plant growth.

Well, I am finally getting around to testing this out with a new experiment. This “first round” is very basic, but it should at least address the main questions I have. 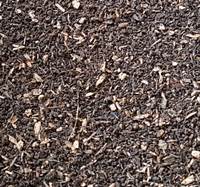 Supplies & Set-Up – the “worm castings” I am using came from my Worm Inn Mega (recently dismantled).

I screened it using my 1/8″ Super Simple Screening Tube, but there is still a fair amount of resistant debris in there (so “vermicompost” would definitely be a more accurate term to use, but let’s not split hairs here).

It is very mature and smells good, so I think it is well suited for the experiment.

I am going with a 20% dilution (4:1 water:castings), which based to my reading seems to be on the high end – but I definitely want to make sure I am “extracting” as much castings goodness as I possible can. 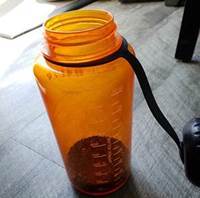 Speaking of “extracting” – it is important to point out that this is a super-simple low tech experiment.

I didn’t use any form of “real” aerator/extractor.

It was just good ol’ fashioned elbow grease and shaker power. (Great workout if you’re looking to add something to your routine! haha)
😉

Some may question the “real world” relevance of the experiment based on that, but I will face those sticks and stones with my chin held high! LOL
(i.e. – take a chill pill – this is mostly just for fun!!) 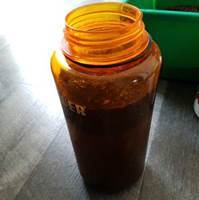 I used a standard measuring cup to first measure out 200 ml of the castings (what my wife doesn’t know won’t hurt her), which were added to the bottle.

The process was then repeated for 800 ml of aged tap water. Luckily there was still a decent amount of space left in the bottle for oxygenation.

I decided on an arbitrary “5 minutes” for the “vigorous shaking period”. While certainly not a more typical “24 hour extraction” – haha – I figured that given the small volume of castings (and the power generated by my guns of steel) it would still be pretty effective nonetheless!

NOTE: I paused my shaking and opened up the lid several times during the 5 minute period so as to make sure there was plenty of oxygen available.

Once the shaking was complete, I then poured the bottle contents through a tea towel sitting in a metal sieve positioned over a small bucket (that swallowed a cat to chase the frog, to catch the fly…I’d likely die…if my wife knew about any of this).

(You know you have young kids when…lol)

I then bundled the towel up and added a few extra squeezes at the end for good measure! 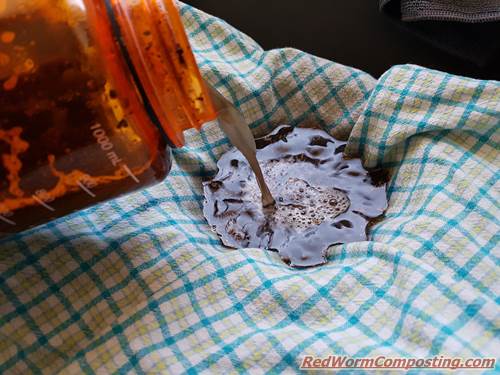 The “tea” was poured into 3 small ziplock bags, which were then sealed up.

That took care of the “no amendment”, non-aerated tea experiment.

I could have just left it at that (if I wanted to answer my main question), but I figured it would be fun to also try adding a simple sugar source to another (almost identical) batch of the tea.

So I went through the exact same process all over again – with the ONE key difference being that I added ~1 tablespoon of real Elmira maple syrup (yep, we’re kind of a big deal up here…huge festival every year and everything…just sayin! lol)
😉

Both of my teas looked very similar in terms of color (pretty tea-like if you ask me) and both had a nice earthy smell to them. 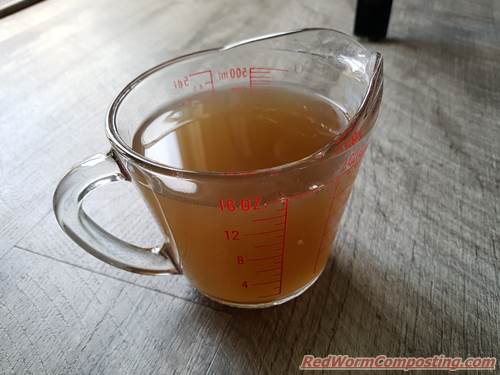 I put the little bags in an old salad container and placed it on a shelf in my basement. 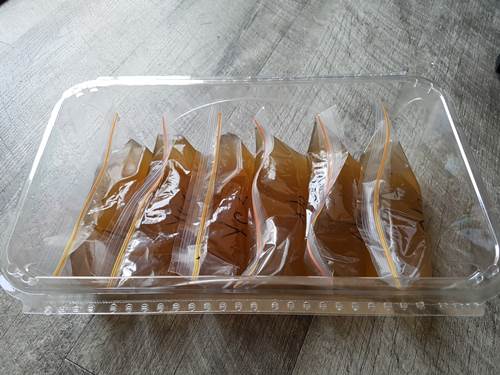 This was on Monday (March 19th). In order to maximize the potential for anaerobic conditions to develop, I’ve decided to let everything sit for a week or two before conducting (with trepidation) my smell test.

Just for kicks, I decided to check on the bags a few minutes ago (today is Friday of same week) and it is already very obvious which bags received the amendment and which ones didn’t (“Yes, Yes, Yes, No, No, No” labels aside! lol). There is an obvious biofilm on the inner surface of the syrup-admended treatments and the liquid itself is quite cloudy. The tea in the non-amended bags looks basically unchanged.

Tried to capture a good image of it – but it basically just looked like the one above! lol

Once I’ve assessed stink factor I am hoping to test the teas out for germinating and growing some seedlings as well.