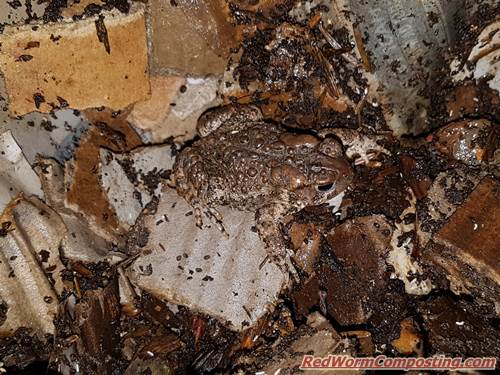 Yesterday, after a fun little game of soccer (A.K.A. kicking a deflated basketball back and forth between two toddler-sized hockey nets) with the kids, my daughter and I came inside, leaving my son to dig in the garden for a little while longer.

A few minutes later he came rushing into the house, shouting at the top of his lungs that we needed to come see the “toad” he had found.

[My heart sunk at this point, assuming I’d be performing some sort of toad autopsy – followed by a special toad burial ceremony. lol]

Amazingly enough, what we found when we reached the excavation site was a rather deep hole, and a fully-intact – albeit sluggish (still quite cold here) toad – sitting in the bottom.

My first impulse (and suggestion) was to immediately bury the poor thing so it could resume its cold-weather slumber in peace. But the kids were beside themselves with excitement, instantly hatching all sorts of indoor “toad condo” plans.

I’ve been there many times as a child – and my dad pretty much let me keep everything (NOTE: infant racoons are not necessarily the best house pets)…SO, there’s no way I could turn them down.

Just seeing them excited about something NOT on YouTube or Netflix pretty much sealed the deal for me.

But I still wasn’t sure where to keep the darn thing!

As we made our way inside I spotted a clear salad container in the recycling bin that looked like a decent option…but then it suddently hit me (I’m sure you see where this is going! haha).

What about my Urban Worm Bag??

Talk about toad paradise – especially when compared to a cold hole in the ground!

So yeah, we have a new pet toad (I’m leaning towards “Ted” – but I’ll see what the kids think) and the critters of my UWB have a new arch enemy. lol

Joking aside – I think it will actually be really interesting keeping a larger predator in the system. YES, it is going to eat some worms (let’s just get that out of the way) – but I doubt it will put any sort of real dent in the population. Plus it will likely keep populations of other organisms, like gnats, springtail etc in check.

So far the toad seems to have settled in nicely – and I don’t usually see him (no clue if male or female so just picking one and running with it) when I look in.

What’s interesting is that the worms seem to be responding to the threat – perhaps due to the vibrations of the toad moving around in there – by climbing up the sides of the UWB. This morning is the first time I have found ANY on the sides of the bag. Not an attempt at mass exodus (or anything remotely close) – just a noticeable number of worms versus the usual “none”.

Toad drama aside, things are coming along beatifully in the system and the level has dropped down quite a bit! Overall, I’ve been taking things pretty slowly – only 15.53 lb of kitchen scraps added so far (we’re about two and a half weeks in) – but I am thawing a new (heavy) batch that should be getting added tomorrow or the next day. 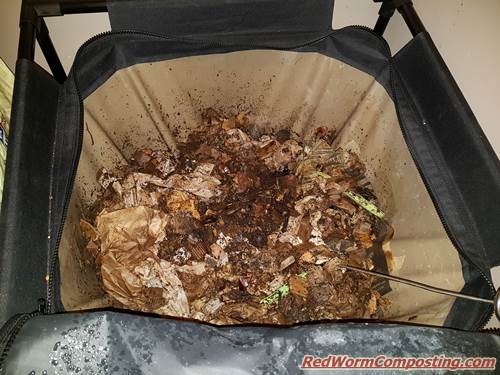 I should probably take some shots of the toad that clearly show its size now. I have a sneaking suspicion he could grow pretty big by the time “toad release season” (haha) arrives!

Anyway – should be fun!
Stay tuned!
😎

P.S. You may also want to check my Toad Fruit Fly Trap post. In that one I speculated that a worm bin would NOT be an ideal habitat for a toad, but that was before I started using Urban Worm Bags! Haha