Yesterday was my birthday and I must say that being able to spend most of the day immersed in vermicomposting “stuff” (and then hanging out with my fam in the evening) made it that much better!

One of my activities involved setting up my new Urban Worm Bag.

As alluded to (I think) in my last UWB post, I decided to take down my Worm Inn mega system ahead of time, so that left me with some available space for the UWB in the corner of my basement bathroom (something I am very happy about since my basement is very cramped at the moment).

So let’s get down to business here…

I decided to set up my UWB using a very similar approach to how I would set up a Worm Inn. First, I started with my “false bottom”. I am actually really starting to like the special pocket in the bottom of the UWB, since it serves as the perfect little receptable for my first layer of dry shredded cardboard. This zone should help to soak up any liquid that happens to trickle down into the bottom.

People often wonder if this cardboard will be processed along with everything else above. The answer is usually NO – and that’s ok! This is just a strategy I use for phase I of using this type of system, since there is a greater chance of moisture making it down to the bottom. 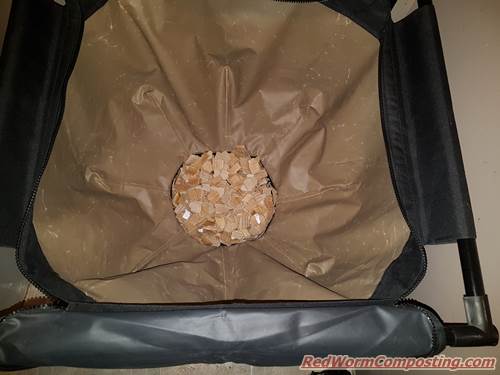 Next came the layers of newsprint. In this case I added 7 sheets, added with alternating orientations so as to provide better coverage of the bottom. I then lightly moistened the newsprint so the sheets would stick together and stick to the sides of the UWB. The idea here is to avoid (if possible) having worms and critters crawling down into the pocket. I want to keep everyone up where the action is! 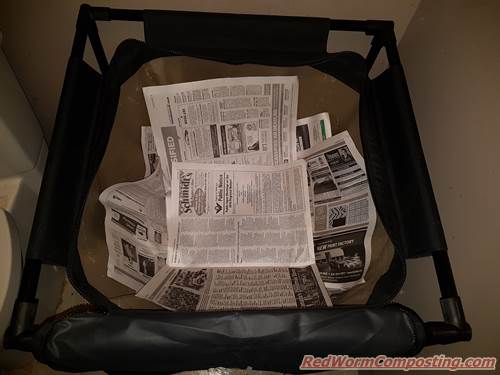 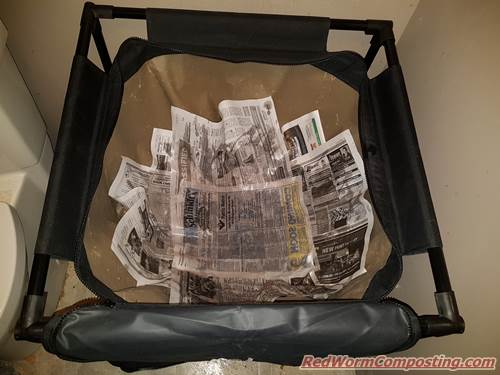 Over top of the newsprint I added a bottom layer of shredded cardboard. It is up to you whether or not you moisten this material, and it should depend on the moisture content of the food and wormy material (assuming you are not just adding bulk worms) you will be adding on top. My worm mix was quite dry and the food I used was far from sloppy, so I opted to moisten the cardboard lightly. 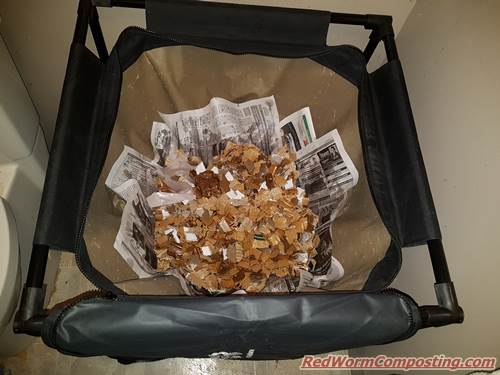 As you might guess, my worms simply came from my Worm Inn Mega system. If you watched the video in my last Mega update post you’ll know that the system had LOADS (and loads) of tiny worms. So I can only imagine how many worms ended up in the 5 gal pail I used to collect the worm-rich material.

I am happy about this because I definitely want to hit the ground running with this project. All that excellent living material in the mix will really help as well! 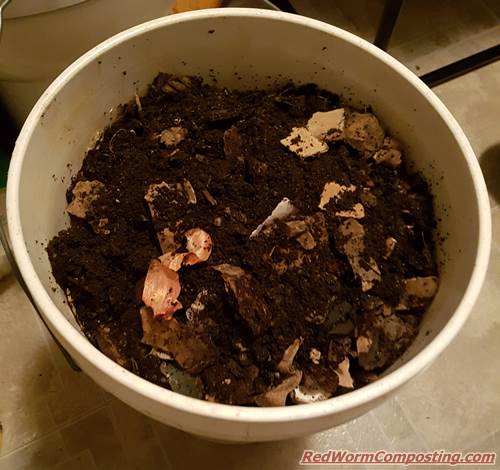 There are various ways you can add your worms, food and bedding in a system like this. If I was starting from scratch with just bedding, food waste and a bag of bulk worms from a supplier, I would more than likely mix a LOT of moistened bedding with a smaller amount of food waste, toss it in (over top of false bottom layers) and let that brew for 3-5 days before adding the worms (and cover bedding).

But since I had so much great worm mix (which already had a lot of partially degraded bedding in it), I actually didn’t need much new bedding at all (really just at the bottom and over top) – and I certainly didn’t need to let anything “age”.

As far as building up my “worm zone” went… 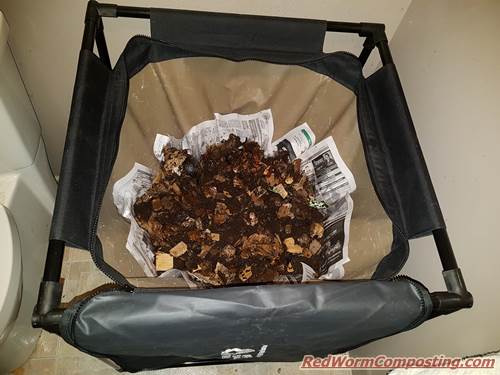 I’ll come back to how everything else was added in a minute, but first I want to talk about the food.

Normally I would use frozen-then-thawed food wastes, but in this case, A) I didn’t happen to have any ready, and B) I actually wanted a food source that would be a bit “slower” so I don’t end up with a lot of moisture released down near the bottom soon after start-up.

Luckily my under-the-sink kitchen scrap holder was reasonably full, and I was able to secure 2707 g (5.97 lb) of mixed scraps – mostly fruit/veggie wastes and coffee grounds – for the system. Even with my interest in slower waste breakdown, I figured I should at least chop the materials up a bit since there were plenty of resistant scraps like carrot and cauliflower chunks in there. Don’t want to end up with a little garden in my worm bin!
😉

NOTE: As you can see, this particular batch of scraps actually had quite a lot of bedding mix in with it (I always add a bedding false bottom in my scrap holder, and varying amounts of bedding in with the food scraps themselves), so I am FAR from worried about not having enough bedding in this system 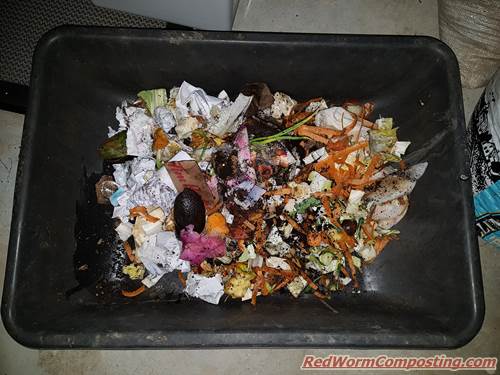 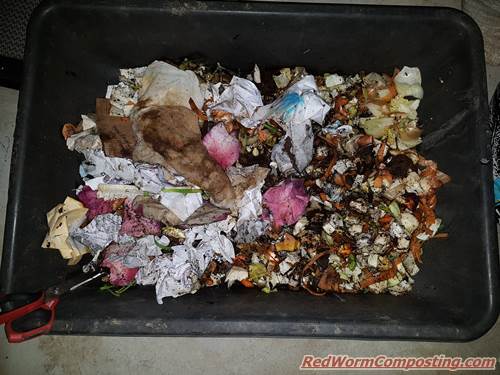 OK, getting back to how I set up the worm zone…

As touched on, I dumped in my first layer of worm mix over top of the moistened bottom-bedding (which could basically be considered the top layer of my false bottom). Then, just added alternating layers of food scraps and this worm-rich material. I wanted to start AND end with worm mix so as to keep the scraps well buried. Distributing the food in layers helps to avoid concentrations of food that can go anaerobic etc. 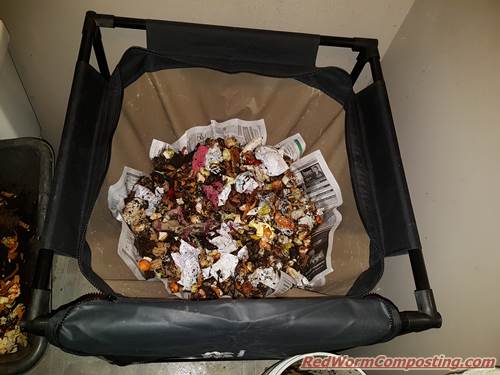 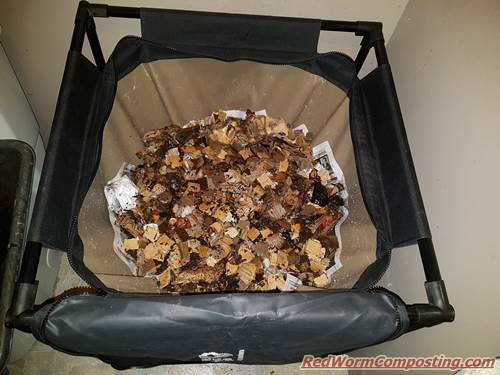 Again, there are plenty of ways you could do this, so don’t assume I am taking a “my way or the highway” stance with this. The KEY thing to always remember is just to make sure the worms have LOTS of safe habitat. Erring on the side of “too little” food and “too much” bedding is never a bad idea early on.

Lastly, I added a thick cover layer of dry bedding. I always like to do this since it helps to conserve moisture, it shelters the worms, and it provides me with a big supply of bedding to mix in with my food deposits over time!

In case you are wondering…the whitish paper is NOT toilet paper! Haha
It is actually packing paper that came with various shipments I’ve received in recent months. Great stuff for worm bins! 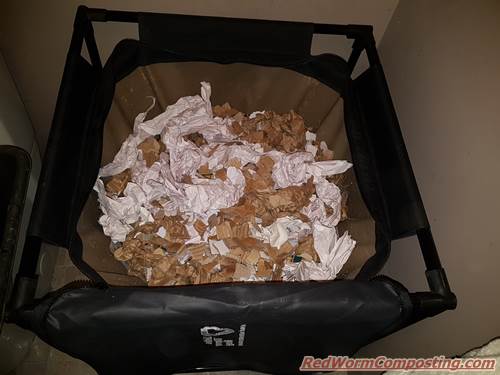 With set up complete, it was then time to zip up the lid and let the worms settle in! 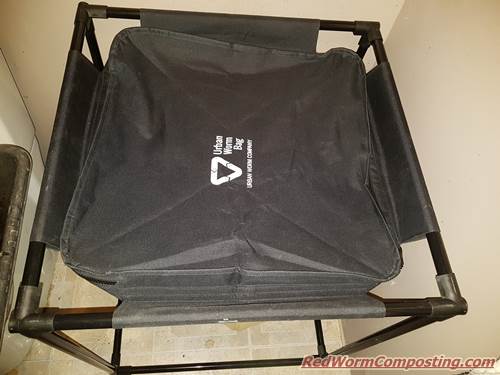 The scope of this first UWB project is very basic. I simply want to see how this thing performs. I will record the weights for all the food waste added, but won’t likely bother with bedding materials. I DO want to ramp things up a bit with this system so I can have some castings to play with by late spring or summer – so I will likely be a little less “lazy” and mellow than normal! lol

Would love to hear from others who are using an Urban Worm Bag (or those just generally interested in the project), so don’t hesitate to leave your comments below.

And as always, DO stay tuned!
😎