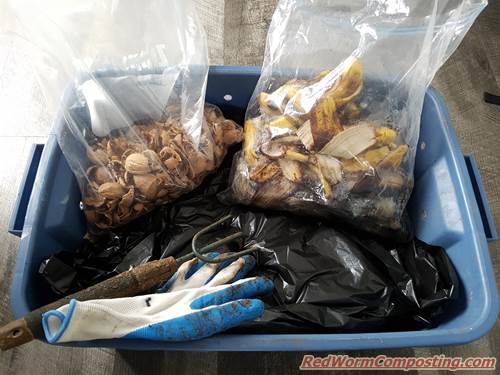 It’s been more than 1 month since my last “Walnut Shells & Banana Peels” update. This is yet another of the “slow” projects I have on the go right now, so there isn’t all that much to add in the way of commentary on a regular basis (I am planning some more “active” projects to add to the mix, so things should start hopping a bit more on the blog soon).

My bag of banana peels was gettinng quite full and I seemed to have a decent amount of accumulated walnuts shells by this week, so I figured I should do a feeding and post this update!

Conditions in the system are great. The banana peels have broken down nicely, giving the worms a nicer habitat material to move around in. Everything looks and smells good. 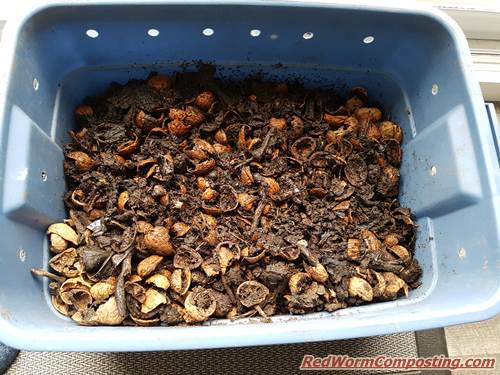 The moisture content actually seems on the high side in most areas of the bin, with little puddles accumulating in various spots at the bottom – but the air flow is so good that this doesn’t matter in the slightest – everything is staying nice and aerobic. 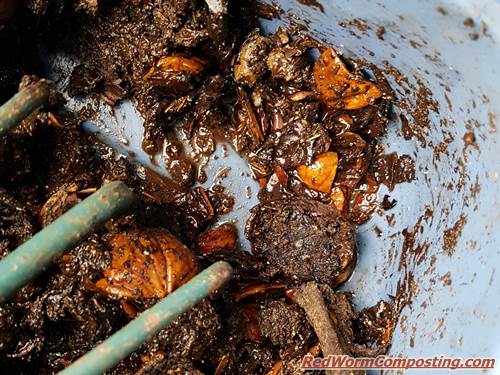 This time around I decided to keep the banana peels in the freezer and then to chop them up really well before adding them, so as to help the microbes and worms do their thing more quickly. 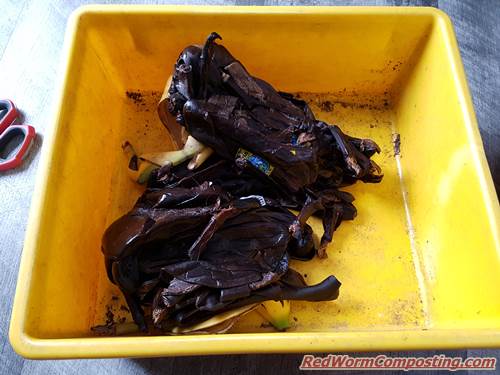 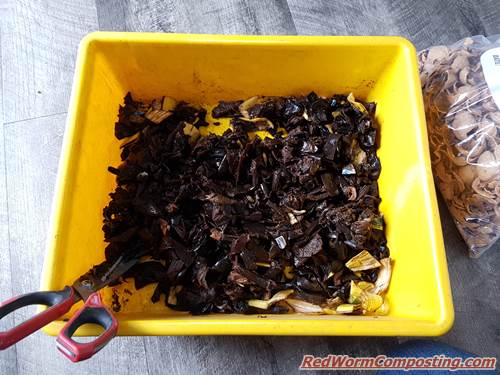 I mixed together a total of 1740 g (3.84 lb) of banana peels with 648 g (1.43 lb) of walnut shells. I figured I would need to add a bit of water, given how dry the shells are, but as it turns out the combined moisture content of the mix looked spot on so I just added it the way it was.

I simply excavated one side of the bin, all the way to the bottom, then dumped the mix in before covering with a layer of the older material. 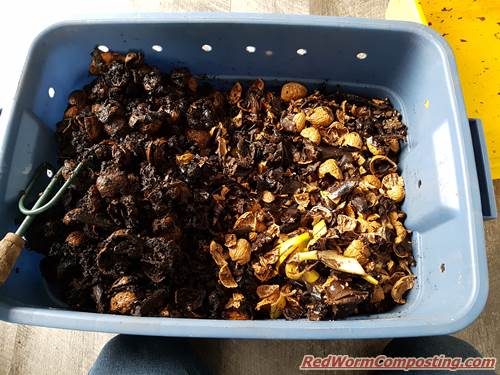 Lastly, I put my trusty garbage bag back in place! 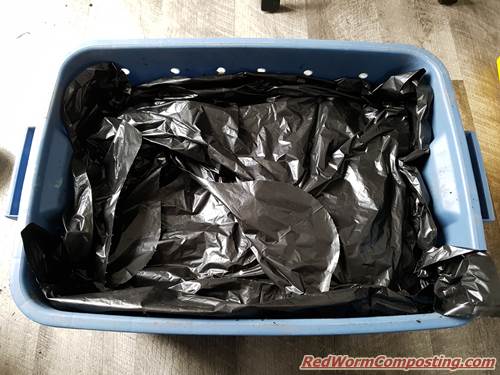 Naturally, there isn’t a whole lot going on with the walnut shells by this point. They have darkened somewhat, but there still isn’t any obvious decomposition. Considering shells are lignfied like wood, this is not surprising at all. I am toying with the idea of maybe boosting nitrogen levels in the system later on to see if that has any effect, but I will likely continue on as-is for at least a month or two before considering that option.

Speaking of feeding – since I already have a lot of shells in there now (and they are not going anywhere anytime soon), I probably won’t add any more for a while. I will simply continue to collect banana peels and add those periodically.

The worms seem very healthy to me, but what’s interesting is that I have yet to find a cocoon in the system, and the population doesn’t seem to be expanding at all. Part of me wonders if there might be pesticide residues on these wastes that might be having an effect. Or perhaps the nutritional value of banana peels alone just isn’t that high (again, pretty clear that no real nutritional benefits are being provided by the shells).

I noticed that pill bugs seem to be doing OK in the system – I will be very interested to see if their numbers increase. I am actually surprised they haven’t left the bin, given how wet it is (they normally prefer lightly moistened environments) but perhaps there is something else keeping them happy in there. There are various other critters in the system as well, including white springtails (common ones that dont jump), beetle larvae and a small number of gnats. But no population explosions by any means.

Like my various other “slow” experiments, I think this should is going to get pretty interesting…eventually!
In the meantime, I may just let the system chug along for a few months before providing my next update.
😎