When it rains it pours – as far as badly neglected (RWC) worm composting systems go (and just you wait – I have another one to write about that is an ALL-TIME personal record for me!).

Back at the end of November 2016, I started up a “Mega Reboot” project with quite a lot of fuss and fanfare (I created an entire “Fun With Worm Inns” project out of it.)

The last time I posted an update here was “Day 46” – late January, 2017. Yep, more than a year ago! And yes, needless to say that between then (a year ago) and now, the Mega has been neglected a LOT!

Well, with my renewed worm composting focus and vigor this new year I figured it only made sense to get my Mega system back in action. So, I started dumping in a lot of food waste – literally just jumping in full bags of the stuff and covering over with shredded cardboard.

To say the system has made a come back would be a serious understatement!
Be sure to check out the video to see what I mean.
😎

P.S. As mentioned in the video, I have plans for a new Worm Inn (and mystery system) project. So harvesting this one will be next on the agenda.

I added 4.91 kg (10.82 lb) of food waste to the Mega today. As mentioned in the video, I have plans to harvest soon and want to make sure the vast majority of the worms are concentrated up as close to the top as possible.

When adding quantities of food like that – even when using a Mega – I highly recommend you make some effort to optimize. Otherwise, you will very likely end up with a foul smelling mess on your hands, and likely some other worm bin issues as well.

The scraps I used came from my deep freezer (and were allowed to thaw out before using them). They included a pretty thick layer of shredded cardboard (I always put this in the bottom of my holder bags before starting to collect scraps, to help soak up excess moisture and keep everything aerobic). 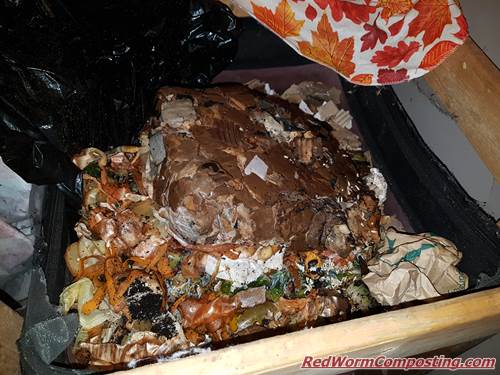 I made sure to spread them out as much as possible, and then mixed them really thoroughly with “living material” from the system itself (lots and lots of beautiful, dry-ish stuff around the edges of the Mega that worked very well). This helps to avoid concentrations of any particular type of waste, it aerates the mix, and it coats the surface of the scraps with beneficial aerobic decomposer microbes (and even distributes worms in the mix as well). This will help to speed things up and avoid funky smells. 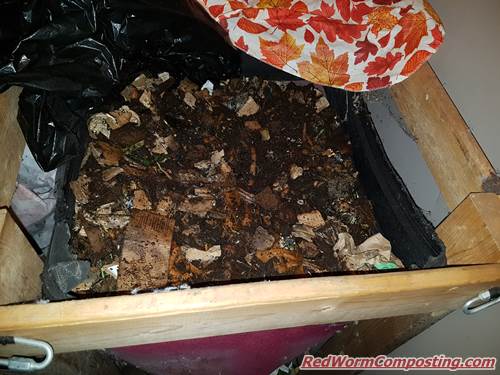 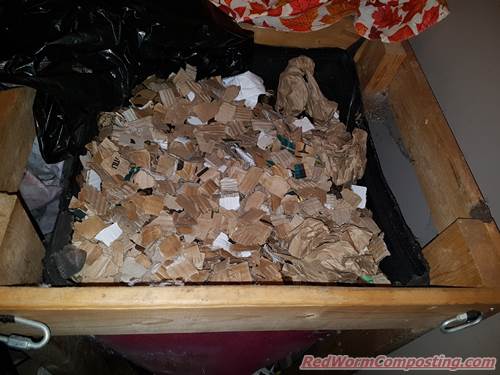 I will check on things early-to-mid next week to see how the worms are doing (and I will likely start harvesting fairly soon after that).
Stay tuned!
😎