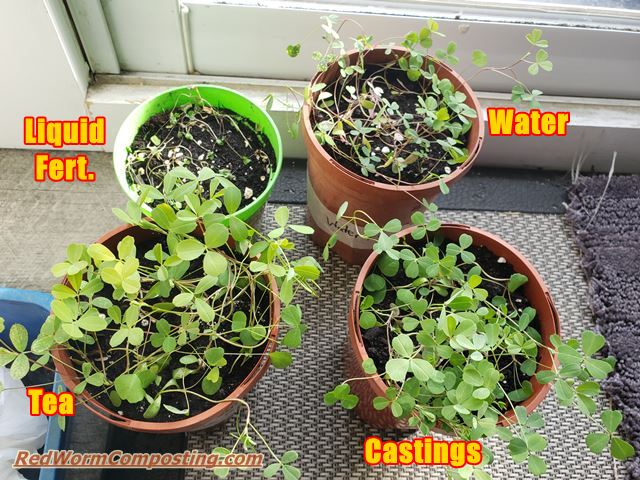 Strangely enough, it was exactly one month ago that I posted my last update for my castings & “tea” alfalfa growth experiment (funny how inspiration often strikes after nice, even time periods have passed – lol)*. Overall, the experiment hasn’t exactly been earth-shattering, but things have definitely been getting a bit more interesting over the past couple of weeks.

*NOTE: Day 38 was February 24th, 2020 when I first started putting this blog post together (and published the update video)

Just as a quick review – this is a pretty basic little look at the impact of worm castings and a liquid castings extract (I’m referring to as “tea”) on the growth of potted alfalfa plants. My other two treatments are water (control) and liquid organic fertilizer spray.

Right off the bat, it is important to point out just some limitations of this “experiment”
– I’m only using one pot per treatment
– I planted ~ 20 seeds per pot (so plants pretty crowded)
– The lighting and temperatures were not at all optimal during the first stretch of the experiment.
– My liquid organic fertilizer treatment – a spur of the moment add-on – used a smaller pot that the other 3 (less room for root growth – plants a bit further away from light source)

As touched on in the video update (below), in some ways I thought that using alfalfa (a nitrogen-fixing legume) might not have been the best idea, but the more I’ve mulled it over, the more I’ve actually been thinking it made good sense. The idea here isn’t to show that plants will grow better when they actually have access to nutrients (Duh). We want to see if there are any benefits provided by castings and/or tea above and beyond basic nutrition.

The potting soil mix used for all treatments has “compost” listed as an ingredient. This plus the N-fixing ability of alfalfa makes me think that even the baseline nutrition in the pots was reasonable for all the treatments.

As alluded to a minute ago, early on there really weren’t obvious differences between treatments. They all seemed to germinate around the same time, with a similar germination success overall. And the seedlings themselves seemed to grow at a similar rate.

If anything, the water treatment almost seemed to pull ahead during the first few weeks. lol

Initially, the plan had been to only use the tea and the liquid fertilizer for those two treatments (and water for the other two) – but I decided this wasn’t a realistic approach. In most cases, tea and liquid fertilizers are going to be used periodically – the plants receiving regular water most of the time.

I didn’t concern myself with keeping track of exactly how many times the tea and fertilizer were added – but they were always used only on the same days, and there were plenty more days they received only water.

As I touch on in the video, this could be viewed as a sort of “advantage” for the castings treatment since each watering likely helped to release more goodness from the castings mixed in with the soil in the pot. And who knows – maybe this is why this treatment looked somewhat greener and healthier.

A big surprise for me was the major decline of the liquid fertilizer treatment plants. I would have made a lot more sense if I had only used that to water the plants – but since that wasn’t the case I’m somewhat at a loss for why this might have happened. Perhaps something to do with the bottle having sat for a number of years before use – but this doesn’t explain how the plants seemed to be doing great early on.

NOTE: The healthy looking leaves in the image below were actually from plants in the tea treatment. 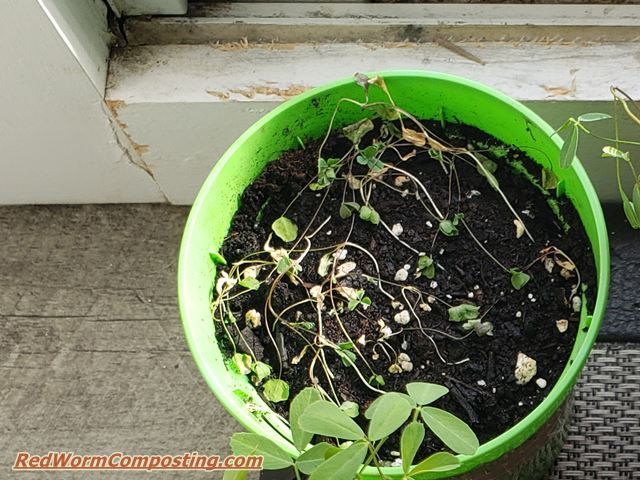 I suppose it might have something to do with the size of the pot – but I made sure not to ever let the treatments get too dry, so this seems a bit doubtful given just how pathetic the plants are looking by this point.

It’s always nice to demonstrate that castings and even basic liquid extracts can have a pretty positive impact on plant growth – even if it is “over the long haul” rather than something really obvious right out of the gates. Plant growing is a marathon not a sprint after all, right?

Be sure to check out the video as well – if nothing else, at least for my award winning cinematography! Haha

Not really sure where things will proceed from here – but I will likely keep things going for at least a week or two more. Will aim to provide at least one more update.