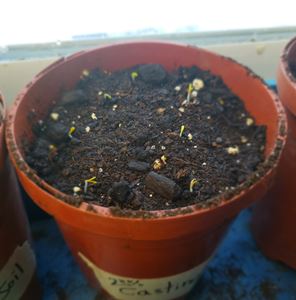 For quite some time I have been meaning to do some more testing with castings and non-aerated castings extracts.

Some may recall that aerated vs non-aerated tea experiment I conducted in 2018 (see “Non-Aerated Castings Tea – 9 Months Later” for the wrap-up and links to earlier posts).

As I discovered, non-amended “teas” can sit for extended periods without going foul (unlike their amended counterparts), but unfortunately I just didn’t get around to actually testing these extracts for their plant-growth-promoting properties.

This past fall I started getting interested in sprouting & microgreens as a winter home food production option, and naturally (me being me) wondered what, if any, impact castings extracts (and castings themselves) might have on sprout and microgreen production. My dad bought me some supplies (sprouting seeds and a little sprouting container), and my friend Alan Yokiosha (who owns a microgreens business) even sent me some cool microgreens kits to “play” with.

As exciting as all this is, I thought it would make sense to start with a fairly basic plant-growth experiment. Nothing super scientific – just a fun test to see what, if any, castings, and castings extract might have on alfalfa seeds/seedlings/plants. 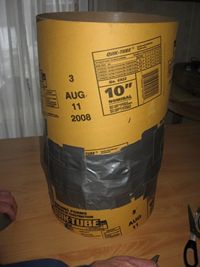 Before winter set in I collected quite a bit of nice coarse vermicompost from my walking windrow system – so I will certainly have more than enough for any sort of growth trials I want to conduct over the next few months.

I started by screening a bucket of the material using my super simple tube harvester. This basic contraption has served me very well over the years, that’s for sure! In case you are wondering, the mesh is likely between 1/8″ and 1/4″.

As is usually the case, I’m not sure if I was more excited about the nice castings (shown in the mortar tray below), or the beautiful, coarse “living material” I screened out (see bucket below).
😉 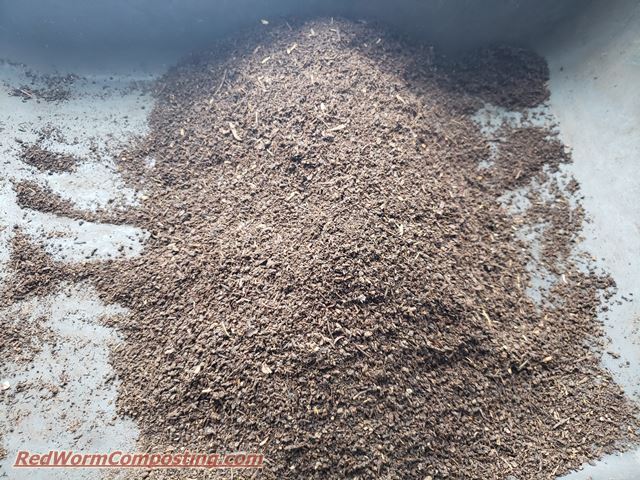 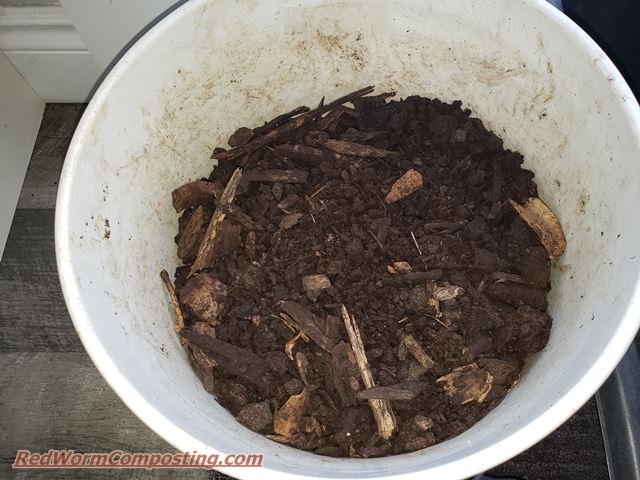 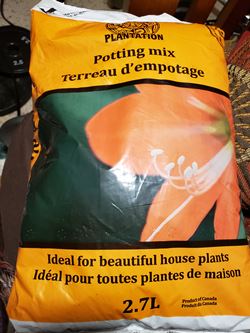 A short time ago I found a basic potting soil mix at our local “Dollarama”, and grabbed some bags knowing I wanted to do some growth trials.

Its ingredients are listed as humus, peat moss, sand, and perlite – which sounds just fine to me (shouldn’t be any fertilizer salts in there). As a sidenote, I’ve also been testing it as a filler material for food/habitat mixes.

I typically don’t recommend this practice (potting soil for worm composting) – since it costs money (plenty of good free bedding options) and because it can get new vermicomposters into trouble if they end up with a soil that does have fertilizers in it. But I figure it’s worth pointing out that I don’t always take my own advice – especially when I am in the mood for testing things out! haha

Since the little bags of soil are 2.7 liters, I thought I would keep things simple by adding 300 ml of castings – or 10% of total volume. It’s been found that castings can have a beneficial impact even at levels of 5% (or lower). After giving it some more thought, however, I settled on 800 ml castings per 3.5 liters (of total mix) – or roughtly 23% of volume.

I made this mix simply by dumping a single bag of the potting soil along with 800 ml of the screened castings into a plastic mortar tray and mixing everything up really well with a small trowel. 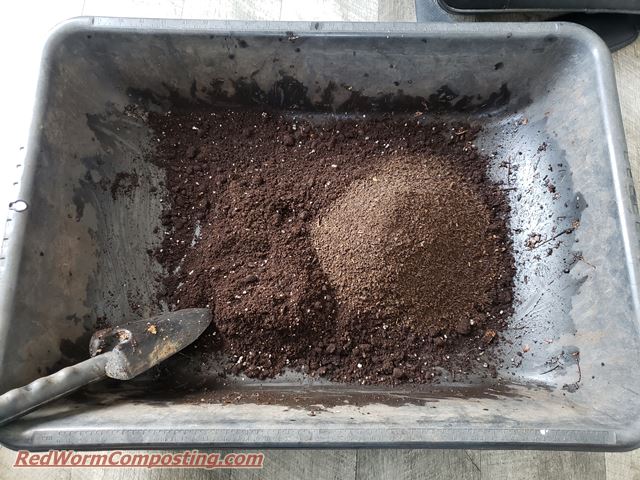 As for my castings extract…

I decided to use the same 20% (4:1) dulution as I had with the other tea experiment (mentioned earlier). The involved adding 200 ml of castings to 800 ml of aged tap water, shaking vigorously for a few minutes, and then pouring through cheesecloth sitting over a metal mesh sieve.

I did this twice so as to leave myself with a decent amount of the extract (maybe enough for the entire experiment). 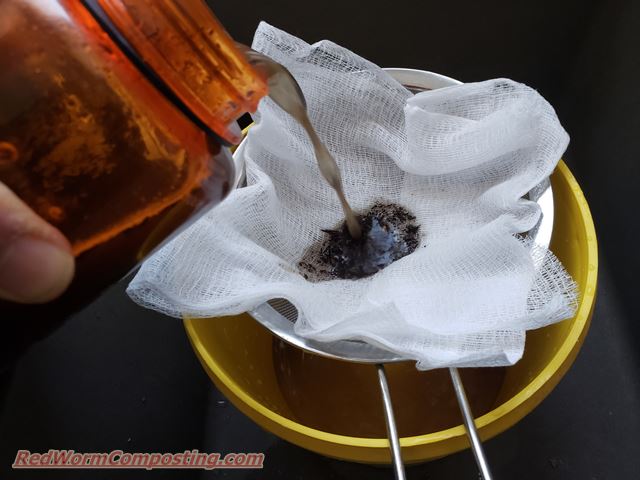 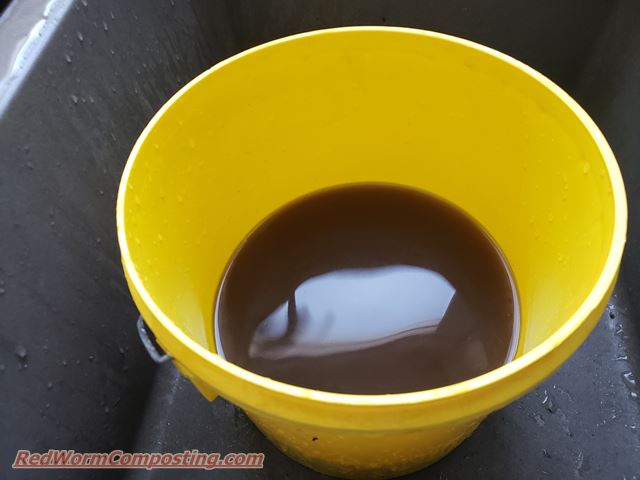 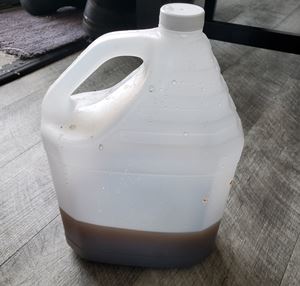 I’m not “tea” expert by any means – but the rich brown color seemed to indicate that plenty of the “good stuff” (humic acids etc) ended up transferred over from the castings.

I poured the liquid into an old (thoroughly washed out) vinegar jug for storage.

I decided on alfalfa as my plant of choice for this experiment because A) my dad had given me some Mumms alfalfa sprouting seeds, and B) because I suspected they would germinate and grow relatively quickly 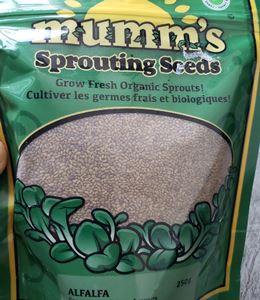 As I said earlier, I decided to keep this first trial pretty simple and “un-scientific”.

One pot for each treatment. ~20 seeds per pot.

No particularly compelling reason for settling on that number other than it seemed like enough to provide us with a decent visual of what’s happening in the pots, but enough space to allow the plants to actually grow to a reasonable size without suffering from overcrowding. 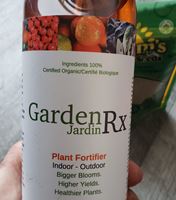 My wife was given a free sample of some sort of liquid “organic” fertilizer spray at a tradeshow a few years back.

I am pretty sure there is some sort of connection with worms (although no mention of this on the bottle) – it’s all a bit hazy now – but regardless, it should be interesting to see how it compares for boosting plant growth!

The pot I used for the liquid fertilizer treatment is technically smaller than the other 3 (which are all the same size) but I’m not going to lose sleep over it!

Set up of the pots was very straight-forward. I filled 3 of them up with just the soil, the other with the castings/soil mix. All the mixes were dampened with just water initially (to provide baseline moist conditions) and then, once the seeds were added along with a light layer of cover soil, each pot was moistened again with either water, castings extract, or the liquid fertilizer.

I decided to dust off my handy dandy seedling warming mat for the experiment – especially since it is quite cool down in my basement. To moderate the warmth a bit more I place a sheet of cardboard and some sheets of newsprint over top. The latter should help to wick away any liquid that happens to drip down – I definitely don’t want to end up with any intermingling between the treatments. 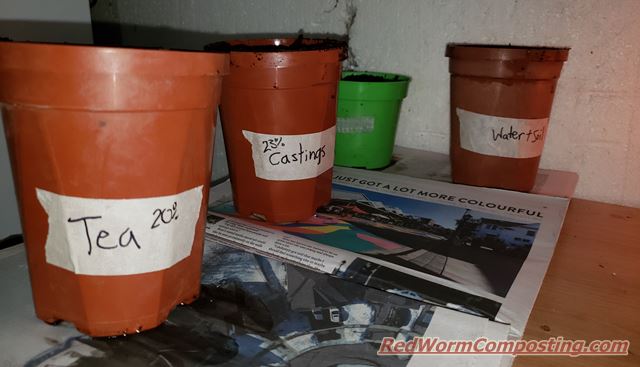 I got everything set up this past Friday, and by today (Day 3) a good percentage of the seeds had already germinated. You can see how they look in the liquid fertilizer treatment below. 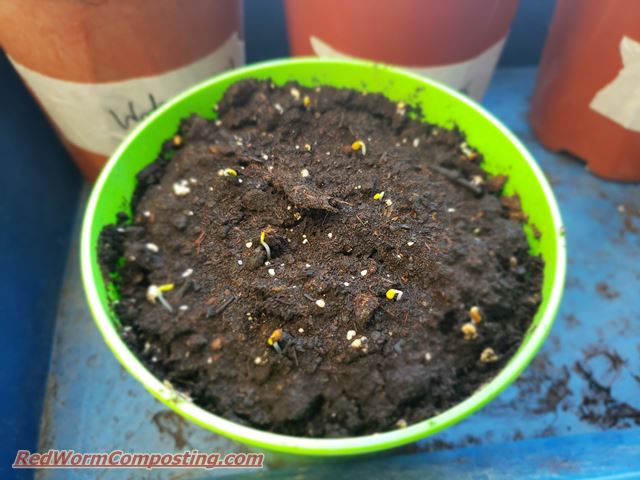 Now that a lot of the seeds are germinating, I will likely keep the pots upstairs (where there is better lighting) during the day, and return them to the warming mat in the evenings. I will keep the soil mixes somewhat damp (with appropriate liquid for each treatment) – likely a bit added every other day for now.

Should be interesting to see how things pan out! Clearly, no special differences in terms of germination (although will be interesting to see timing of remaining seedlings and the final tally for each treatment). For a real germination test there definitely would have been better options than alfalfa – but I am mainly interested in seeing what happens with the plants themselves.