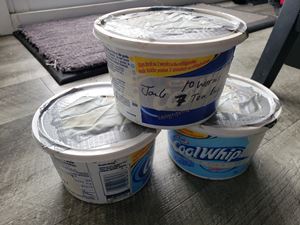 …only to watch as it turned into a complete and utter failure (see “10 Worm Challenge (FAIL) Update“). lol

The important thing is that I learned from the experience, licked my wounds…and now – rather fittingly in the new year – have finally made a fresh start (yesterday was “Day 0”)!

I THINK things will go differently this time around (certainly hope so anyway – or I might start to wonder about these 20 years I now have under my belt).

In some ways I am keeping things very simple – 10 worms, corrugated cardboard bedding, tea bags as main “food”. That’s it. 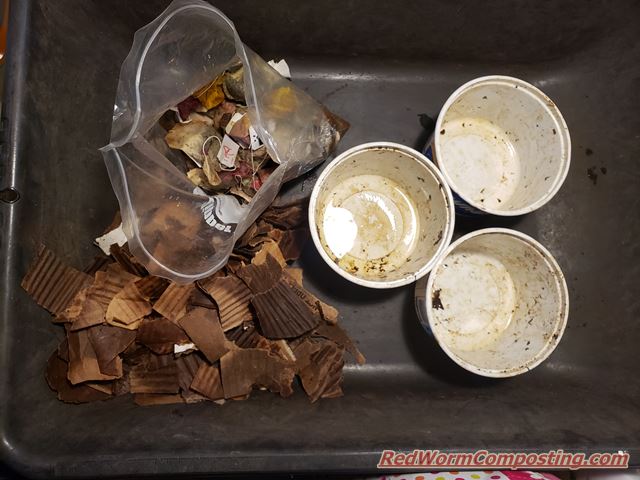 But I am also getting a wee bit “fancy” – the corrugated cardboard was actually soaked in a nutrient solution of sorts, inoculated with some “living material“, and then left to age or a week or two.

The set-up process was super-basic. I just filled the tubs about half way up with the moistened cardboard (hand-torn) – then added 5 used tea bags all in the same (middle) zone. I’ve been collecting the tea bags in a bigger ziploc under my sink for a number of weeks now, so some of would well-colonized by microbes by now. 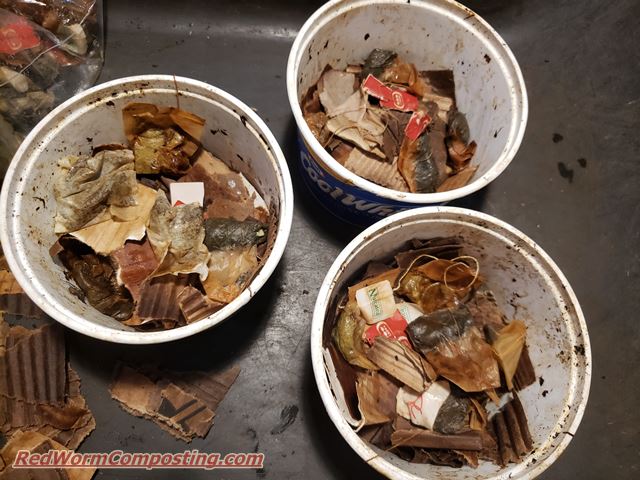 Then, I simply added another layer of the cardboard before putting in the 10 worms.

Speaking of the worms…

I smartened up this time and used healthy specimens – most of them from my original breathable bucket system, a smaller number from another bucket system. I’ll admit that not all of them had an obvious clitellum – but that’s not to say they are necessarily juveniles.

Whatever the case may be, based on the size, they were just fine for me! The aim is to see what happens over an extended period, so the odd worm that’s not quite mature now certainly won’t mess things up too much.

Aside from that, I always need at least ONE thing I can blame my poor results on later! (Haha…kidding).
😉

Feeling a bit paranoid after my last tiny tub disaster, I decided to check on things today. I didn’t go too crazy with it – seeing some healthy, responsive worms in each tub was enough to put my mind at ease. I even decided to add two more tea bags (so a total of 7) to each tub, and spritzed the contents with some water as well just to make sure the habitat is nice and moist.

Since the bins let in a fair bit of light, I also decided to cover them with an old tea towel as well.

Will be sure to give them a proper examination some time next week – and hope to post my first update not too long after that.