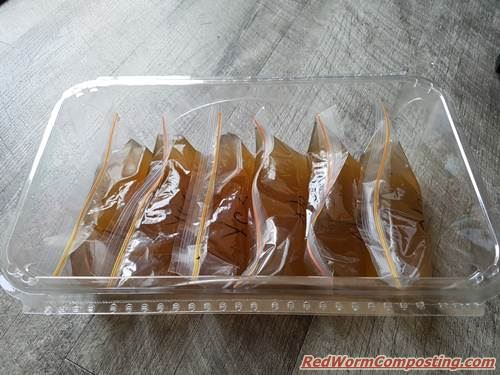 Back in March (2018) I decided to test out non-aerated worm castings “teas” – specifically with the goal of determining whether or not they would go foul without any sort of aeration (after the initial “brewing”, that is).

One treatment received some maple syrup as a “microbe food”, while the other received no amendments and all teas were sealed up in small ziplock baggies.

It didn’t take long to notice a distinct difference between the treatments – the amended teas getting quite cloudy, and starting to stink within the first couple of weeks. The no-amendment teas remained clear (with tea color, though), and no bad odors developed.

By early in April I decided to toss the amended teas simply because the smell was getting too bad. Even just going down to the basement I could smell them (enclosed in the ziplock bags), and I definitely didn’t want any of the odors to end up wafting upstairs!

My original plan had been to test out the no-amendment teas to see if they offered any plant-growth-boosting properties, but my spring/summer ended up a bit “all-over-the-place”. The experiment got shelved (literally) and completely forgotten about…until a number of months later, that is!

A discussion/debate in a Facebook group about aerated vs non-aerated teas (always a hot topic) in the early fall reminded me about the bags, and I decided to check on them. Interestingly enough, there was still no bad smell – only a faint, pleasant earthy odor.

I checked on them again this week, and not much has changed. It’s worth noting, however, that only one of the bags seems to have remained fairly full (I guess these zipper bags didn’t had a perfect seal) – so I don’t really have much of the tea left. 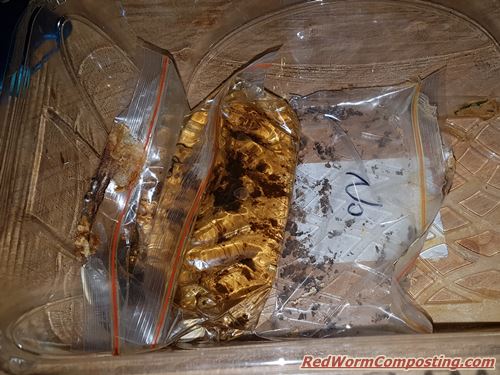 Nevertheless, I would still like to do some testing to see if this extract would offer any benefits to plants.

I would also like to try this out again – maybe this time instead of a sugar source it would be worth testing a mineral-based amendment (I have some rock dust that should work well). Hopefully I can find some better containers as well (some sort of bottle would make more sense).

Bottom-line, it is pretty clear that basic worm castings extracts can have a great shelf life! Now the only question is whether or not they offer any plant-growth-boosting properties.

Stay tuned for more updates in this series!
😎

Slow Progress with a VermBin48