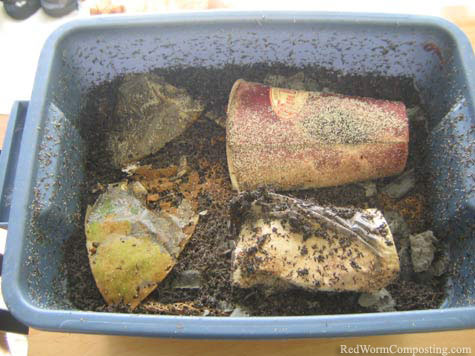 You might be wondering why I am writing a CC Challenge post so soon after my last one (especially given my previous time gaps between posts). Well, as mentioned in my last update the bin I’ve been monitoring has definitely reached ‘maturity’ (ie time to dump the contents and start fresh). One of the great advantages of having multiple worm systems (including a nice big outdoor bin) is the fact that I can easily transfer the contents from one bin into the others.

Today I decided to dump all the contents from the bin into my outdoor system. Before I did that I transferred the remains of our coffee cup over to my second indoor bin. As you can see (above) there was also a coffee cup in that bin. It’s amazing how much of a difference a larger worm population can make! The cup in this other bin looks almost untouched compared to the one I transfered over!
From here on out I will monitor the progress of both cups in this other bin. I’m also going to devote another post to the topic of starting up my other indoor bin again.

Ok – back to the topic of my worm bin dump… 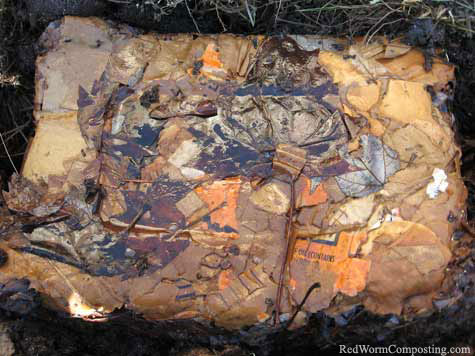 I was actually quite excited to dump out my little bin today. It’s always interesting to see what’s been going on inside, and get a better sense for the size of the worm population.
I knew the bin was getting oversaturated with water (I don’t bother with holes in the bottom of my bins anymore), but I didn’t realize just how saturated it truly was!

The picture above shows a bottom-up view of the bin contents after they were dumped. As you can see there is plenty of cardboard at the bottom that has not been decomposed. In fact, as I started to break up the material with a hand rake I realize that much of the original bedding material (ie the stuff added when I started the bin) was still intact.

This alone told me that conditions in the lower half of the bin have been anaerobic for quite some time, not to mention the funky smell that wafted up to my nose as I dug around. It’s going to be very interesting to see what happens to the material now that it is exposed to oxygen and in my larger bin. I have a feeling I’ll be seeing quite a few of my outdoor worms migrating into that region, and the material will likely be processed very quickly. 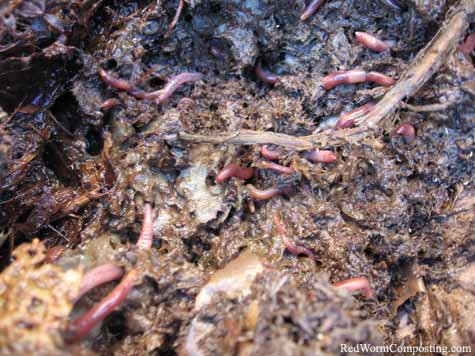 The upper regions of the bin were also very wet, but clearly tolerable for the worms – this is where I found large numbers of them, and it helps to explain why materials were being processed so quickly in this bin.

People may be wondering why on earth I let this bin become so wet – after all, one of the things I highly recommend to newbies is to add drainage holes and be very careful to try and keep things aerobic.

Well, the truth of the matter is that after nearly 10 years of worm composting I’ve definitely mellowed out quite a bit. I now have a pretty good ‘feel’ for the conditions in my bins and the overall health of the worms. As I’ve discovered (and have found research literature to back it up) red worms absolutely LOVE it wet and will happily live in very sloppy conditions – considering the fact that they slurp up microbes as food this comes as no surprise (microbial ‘biofilms’ require a decent amount of moisture to really thrive).
Water can be a serious issue when coupled with over-feeding (probably the most common newbie mistake), and this is when seriously nasty conditions can occur (hence my recommendation to err on the side of caution when first starting out).

On a semi-related note…

Something I’ve always wanted to do is set up an aquaponics system with a gravel grow bed that continually receives water from a large fish tank, and introduce some red worms into the bed after a little while. One of the complaints I’ve heard from people with aquaponics set-ups is that their beds ted to get clogged up with organic matter. I have a sneaking suspicion that composting worms would absolutely thrive under those conditions! Imagine if you will – soaking wet conditions, yet highly oxygenated, with lots and lots of delicious microbial biofilm to feed on! The worm castings left behind would then serve as an extra boost for the plants – plus any worms that happened to make there way out of the bed and into the fish tank would become a tasty treat for the fish!

Anyway…sorry – I kinda got carried away for a minute there! Hehe…

Stay tuned for more coffee cup updates and further updates on the anaerobic slop I added to my outdoor bin!