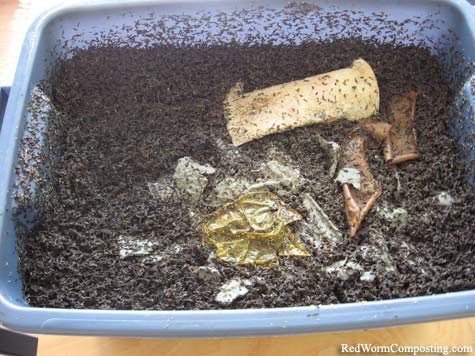 Once again I have let my coverage of the CC Challenge lapse, and in fact my work on the site in general (new blog posts etc) has come to a complete stand-still for the last couple weeks. Sorry about that – things have been quite crazy as of late. I’m hoping to get at least one or two new posts up this week aside from this one, so do stay tuned.

Ok – well as you can see from the above picture, a LOT has changed since the start of the experiment, and even quite a bit since our last update. The coffee cup has continued to break down, and in fact was half burried in vermicompost before I pulled it out for some pictures.

There is no longer any evidence of the watermelon in the bin, and even the tomato, sweet potato and fresh bedding I added after our last update (since not much food left) have almost completely disappeared.

Truth be told, this bin is just about ready to be started over. Tiny bins like this tend to have a relatively fast turn-over rate, and I’ve actually noticed quite a lot of water pooling in the bottom of the bin, so it’s time to release this herd into my outdoor bin. I will likely transfer what’s left of the coffee cup into my other indoor bin so as to monitor it’s degradation to the end. (I actually have a cup in the other bin, but have not bothered to provide updates since progress was slower due to lower worm population) 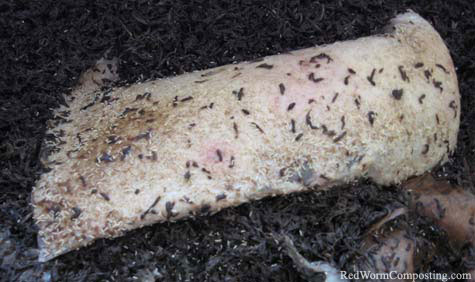 Here is a close-up of the cup after 33 days in the bin. You can see that there are many many springtails covering it. The dark clumps are of course ‘worm turds’ – essentially what makes up the vast majority of the bin’s contents at the moment!

Flipping the cup over, it was interesting to see that… 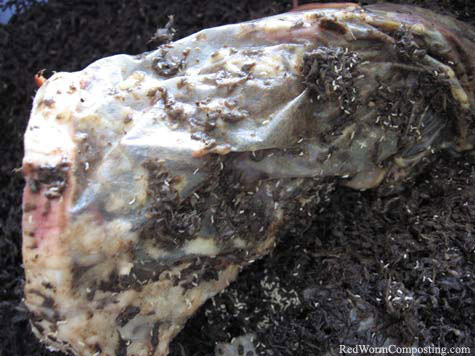 …the cardboard coating has been almost completely removed, leaving behind a plastic inner shell – eventually this will be all that’s left. 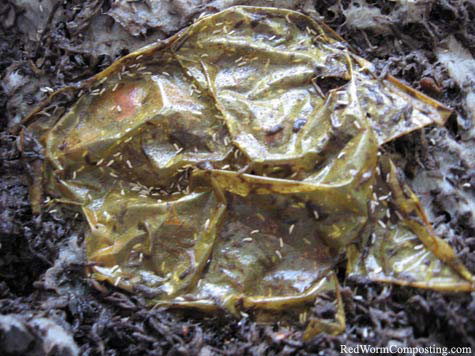 Here is a close-up of the remains of the tomato I put in. It was placed on fresh bedding, but as you can see this too has been largely processed as well.

As mentioned, I’m going to start this bin over. Rest assured I will devote a separate post to this task, and hope to get it up sometime this week!