Quick update on the Euros vs Reds Head to Head Challenge front! I decided to check on my two bins yesterday. For one thing, I wanted to determine the number of worms in each bin – plus I wanted to feed them for the first time (not including the food that was mixed in when setting up).

As you may recall from my last update, I added six medium-sized Euros along with two cocoons to their system, and just left the Red Worm bin as-is. I could only find three of the Reds at the time, but I figured that – worse case scenario – they might simply end up being at more of a disadvantage out of the starting gates.

As it turns out, there was nothing to worry about at all! Yesterday I found all six of the Red Worms that had been originally added to the bin when I first started. They were very young when added, and not all that much time has elapsed, so there’s no way they’ve had time to mature, reproduce, lay cocoons, AND have young hatching out! There DO seem to be some mature ones in there now, though – well, at least two or three of them. I found two that were clearly mature (well-developed clitellum, like the one in the photo below), and one that was borderline (very close, if not already mature). 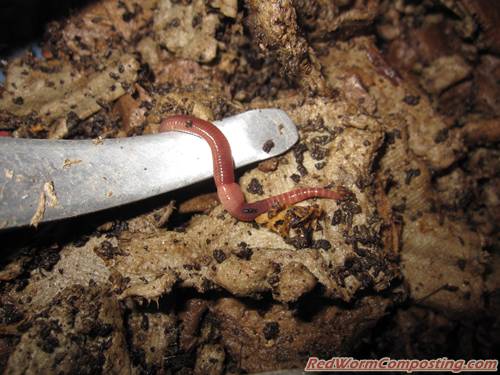 I was very pleased to find ALL six Euros (those added last time – obviously NOT the originals! lol) as well – PLUS there was a very small juvenile! So, at least one worm has hatched out from those two cocoons I added. I’ll keep my eyes open for any others over the next couple of weeks.

I had cut some carrot peelings, tossed them in the freezer, then allowed them to thaw out and age prior to my feeding session yesterday. I wanted to have a uniform material, and one that the worms could readily feed on soon after it was added. Since these bins are very small, and there is only a handful of worms in each, I settled on 100g (0.22 lb) as the amount of food to add. 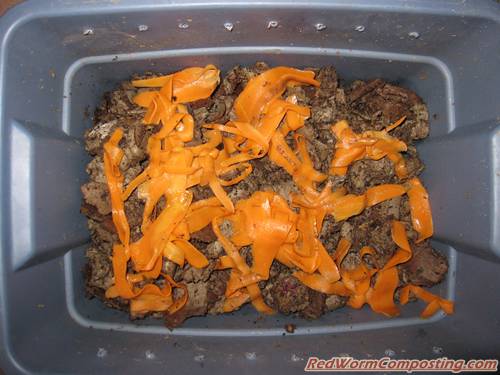 Once the peelings were added, I added a layer of dry, shredded cardboard over top. 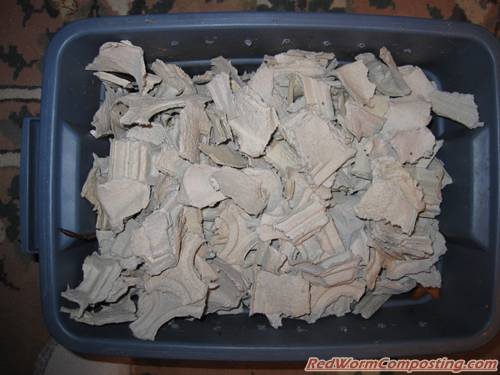 I am definitely feeling better about the experiment now that the ball is rolling, and the worms seem to be doing well! I look forward to seeing how things go from here.