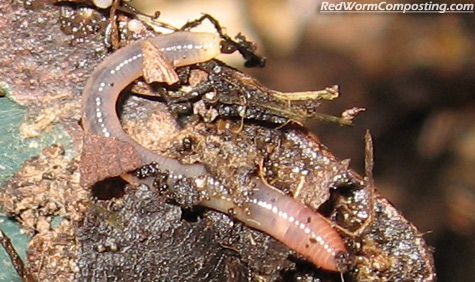 It has been almost 3 MONTHS since my last ‘4 Worm Experiment’ update, so I figured I better provide one this week for sure. I was actually away for more than 2 weeks recently so I haven’t even been monitoring the system for quite some time. Before I went away I did however make sure to thoroughly soak the contents of the bin to make sure it didn’t totally dry out on me (I’ve been having issues with keeping everything moist in that bin).

If you need some background info on this experiment, be sure to check out my first post in the series: Four Worm Reproduction Experiment. I’m sure many of you who have been following since the beginning could even use a refresher given how long I’ve gone between posts!
😯

As expected, quite a bit has changed since I last looked in. I’m happy to report that I found quite a few baby worms at varying stages of growth. The one pictured above could be considered more of a juvenile worm than a baby. I also found a very diverse ecosystem now thriving in the system – I guess all that moisture I added really helped. There are lots of mites, springtails, various kinds of insect larvae – even white worms (I think – need to have a closer look with my Eyeclops). I was able to find three of the four adult Red Worms, all congregated in one corner of the bin. I didn’t want to disturb the system TOO much so I didn’t didn’t bother continuing my search for the fourth worm.

It looks as though things are once again starting to dry out, especially around the edges, so I’m going to try to be more diligent with my watering. I want to be able to add a second tray to the system before Christmas – haha! All joking aside, I have little doubt that once the young worms grow up the waste materials will start getting processed a lot more quickly!

There were a few other brave souls who decided to try out their own Four Worm Experiments, but I haven’t heard back from anyone in awhile (no surprise there, given the lack of updates on my part!!). Allen, from Driftless Ramblings was actually blogging about his experiment, but his last update was back in January. Hopefully I can inspire him to provide an update as well!
😆

Anyway, thats all for now. Won’t let it go as long before the next update!

How Much is Enough?