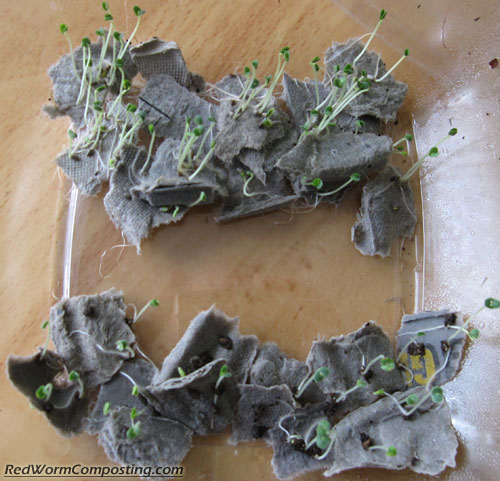 Early last year I tried to start a fun worm castings project with a ‘Chia Head’ (like a ‘Chia Pet’, but picture Homer Simpson’s head instead of an animal – haha). I never wrote about it here because it never really got off the ground. At the time I was battling a pretty serious fungus gnat invasion, and these little pests seemed to absolutely LOVE colonizing my Chia Homer – kinda taking the fun out of it!

My plan with the Chia Head project had been to see if Chia (Salvia hispanica) seeds would grow differently when briefly exposed to a solution containing a small quantity of worm castings (in that case, castings provided by Worm Power).

Well, even though the Chia Head itself had to be abandoned (I’ll try it again – I promise!), just for fun I ended up putting some of the seeds – some having been soaked in the water/castings solution, other just in water – in a grow dome on some wet cardboard pieces. As is often the case with my projects, the plants that sprouted ended up suffering from some serious neglect. The only thing I noticed initially was that the water treatment seeds actually germinated FASTER, so I really didn’t think anything was going to come of it. Little did I realize that for once, my neglect was going to lead to an interesting discovery!

Long story short – I basically forgot about the plants and they dried out. Oddly enough, those that had been exposed to the castings ended up being the only ones that didn’t die (when I re-hydrated the system, they quickly made a full recovery, while the water-only plants were definitely down for the count). I wrote a post about this – Worm Castings and Drought Resistance – and promised to redo the experiment to see if I could get the same results.

For some reason it popped into my head again recently, and I decided it might be a good opportunity to test out the vermicompost I harvested from one of my Worm Inns.

I must admit that serious science ended up thrown out the window with this second attempt – as you can see in the first picture (at top of blog post), I was a little sloppy with my seed distribution (among other things) between the two treatments (the no-castings treatment has a lot more seeds in it). This could have a serious effect on the results of course, since more roots will absorb water faster, thus causing this treatment to dry out faster. Duh!!

Anyway, I will definitely redo the experimental set-up fairly soon, but just for fun I will let it proceed as is for now.

Here is a run-down of my methodology… 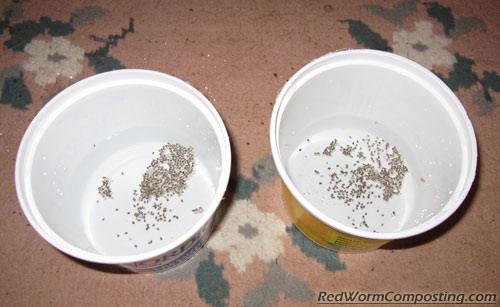 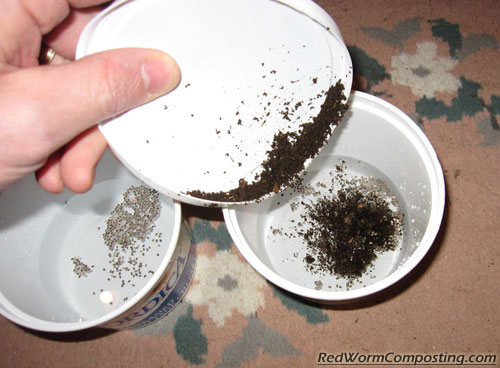 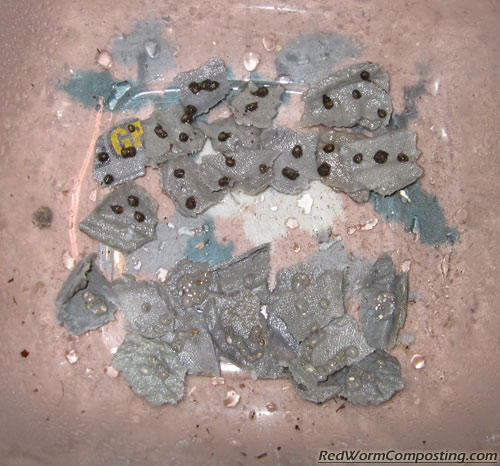 I mixed up the water/castings solution, then left both treatments to sit overnight. The next day I gently rinsed the seeds (but as you can see, some of the vermicompost material stuck to the mucilaginous coating of the Chia seeds) and added some of them to moistened pieces of cardboard in a small humidity dome. 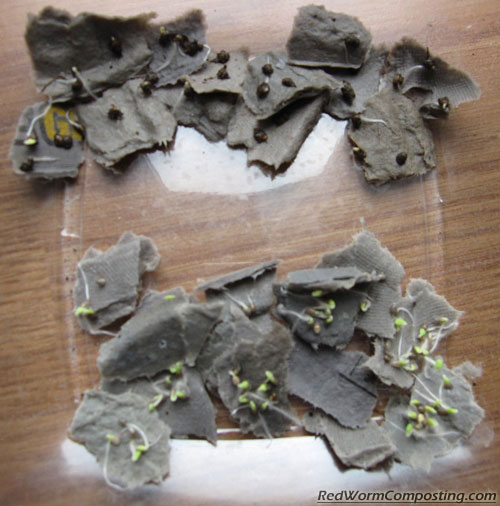 As was the case the first time I tried this, the seeds from no-castings treatment began germinating more quickly than those exposed to the castings solution.

The very first picture (at beginning of post) is one of the most recent taken. As you can see, the castings treatment seeds are doing just fine. The average leaf size seems to me to be a wee bit bigger than in the water treatment, and the green color seems to be somewhat darker. Other than that, there really doesn’t seem to be any major differences.

Anyway – that’s pretty much it for now! I will keep you posted on the growth of the seedlings. I won’t be adding any more water (other than what was added to moisten the cardboard) so they should start to dry out before too long.
Again, we’re NOT going to draw any serious conclusions from this yet. This is just the warm up round! haha
8)