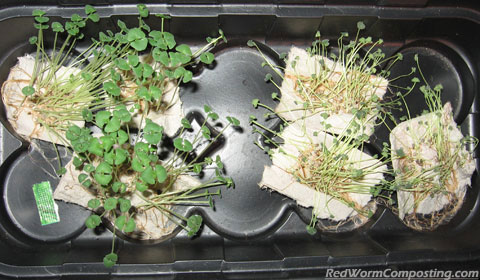 Hi everyone. Sorry I haven’t been able to write as much as I’d like lately. With our new addition to the family (who arrived back in September) I definitely need to be a bit more attentive of the ol’ ‘bottom-line’ (thus spending more time on actual ‘work’ projects).
🙁

Anyway, enough moaning for one post (haha). I have some exciting an unexpected results to share with you. I’m sure some of you will remember that a little while ago I received a complimentary tub of Worm Power castings (which led to me acting like a crazy fool, I might add – haha).

Well since that time I’ve been playing with these worm castings a little to see how they perform. My houseplants have never looked better!
🙂

I actually had a specific experiment I wanted to try out, but it ended up going awry (will try it again though, so won’t say more than that). Interestingly enough, I threw together a tiny side experiment just for fun. I separated out two batches of seeds and let them soak in water overnight. The control seeds had nothing added, while the other seeds had a “pinch” (literally – I have a set of measuring spoons and one of them has the volume of a “pinch”) of worm castings mixed in with the water. Be assured, we’re talking about a very small amount of castings.

After the seeds had soaked overnight in the solution I next spread them on absorbent pieces of cardboard (my favourite for worm bins – egg carton cardboard), moistened them a little more, and closed them within a small seedling growth tray.

I’ll be honest, initially the results were less than spectacular. The water-only teatment seemed to germinate first for the most part and those seedlings even seemed to look more vigorous as they grew. Things gradually started to change though – kinda like the fable of the Tortoise and the Hare. hehe

The castings-enhanced treatment grew steadily and it wasn’t long before they were looking like healthier seedlings than the water-only treatment.

But that’s not the exciting part!

Despite some interesting results, I pretty much stopped watering the seedlings and kinda forgot about them in general. One day I happened to look at them and noticed some startling results. The water-only side was badly wilted, while the castings-treated plants were healthy and vigorous! Thinking it might have just been a fluke, I watered both sides thoroughly and once again left them unattended.

Today I just happened to check in on them and low and behold I saw the same results – this time even more pronounced (since they have been ignored longer). The picture above was taken this morning.

Now here’s the thing – if this were a soil-based experiment I could definitely see how castings would improve water retention since they definitely help improve soil structure etc. But this is an experiment with NO soil, and the tiny amount of castings added were simply mixed in with the water solution the seeds soaked in (so certainly not much, if any, in the way of solid castings material on the cardboard growth platforms).

This is totally cool!

Anyway, I’m going to repeat the experiment, this time adding one more cardboard platform to each treatment and also mixing treatments together (making sure to mark them of course), so I can eliminate the possibility of biased watering or anything like that.

Be assured, I will keep you posted!