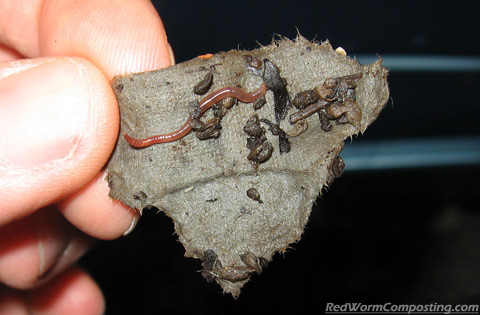 Back on December 5th (2007) I excitedly announced the arrival of my European Nightcrawlers (Eisenia hortensis). Well it seems I have reached another milestone – I found the first juvenile worm! This is really exciting!

Unfortunately this doesn’t mean I can assume that my worms mated and produced offspring in two months – almost certainly some of the worms arrived fertilized and ready to lay eggs. I will have to try out something similar to the ‘4 worm experiment‘ in order to get any sort of reliable info regarding the reproductive capacities of European Nightcrawlers. Now would be the time to start it too! I think I’ll collect some of the mature Euro cocoons in my bin and start a small worm bin (maybe using an old margarine container or something like that).

Speaking of the ‘4 worm experiment’, I’m definitely miles overdue for an update there. Unfortunately I’ve been dealing with really dry bin conditions (keep forgetting to water it regularly) so I don’t think I’ve been exactly creating ideal conditions for worm hatching! The adults do still look very healthy though, and I’ve found a number of cocoons in the bin.

Ok all for now!