I recently alluded to the fact that when you are a true “worm-head” you see the world through a different lens. Countless containers, and other miscellaneous items suddenly seem like they would be “good for vermicomposting”.

So, this morning as I was brushing my teeth and staring idly at one of my wife’s itty bitty containers of skin cream (that she likely didn’t pay itty bitty $$ for), inspiration struck me like a lightning bolt! And a voice inside my head said:

“You must make the world’s smallest worm bin…today!”

(Or something along those lines)

As I wandered around the house looking for teeny tiny, but empty, skin cream containers – with zero success – I came upon a sight so incredible, I was at a loss for words (I wrote “worms” the first time).

The 100% perfect, itsy bitsy, teeny tiny bin – on a keychain no less – for the project. 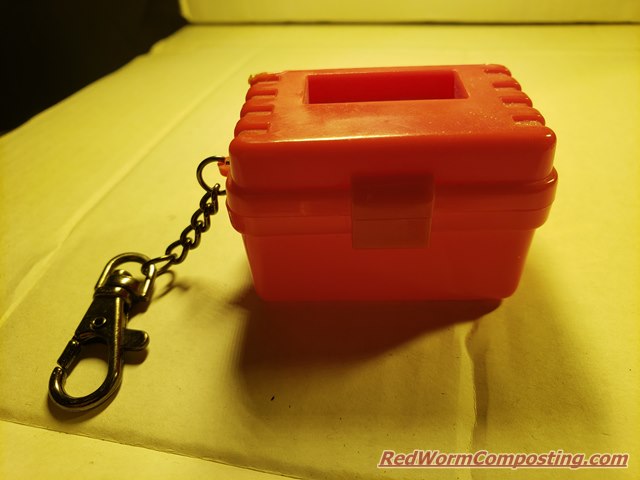 I immediately started formulating my gameplan.

First, I would need to put some air holes in my teeny tiny bin – worms need oxygen!

So, I grabbed a paper clip and a bbq lighter and got to work. (Oh, and I should mention I also grabbed a pair of pliers – after all, it is very difficult to set up a teeny tiny worm bin with burnt fingers). 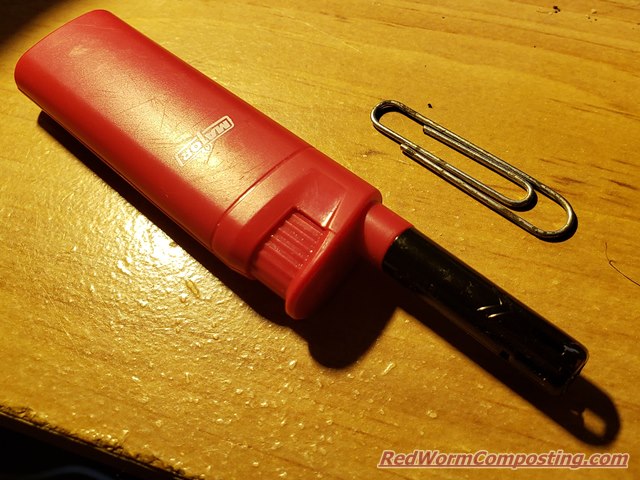 After melting some holes I suddenly realized there were already two “big” holes in the lid. You can see one of them in the picture below. 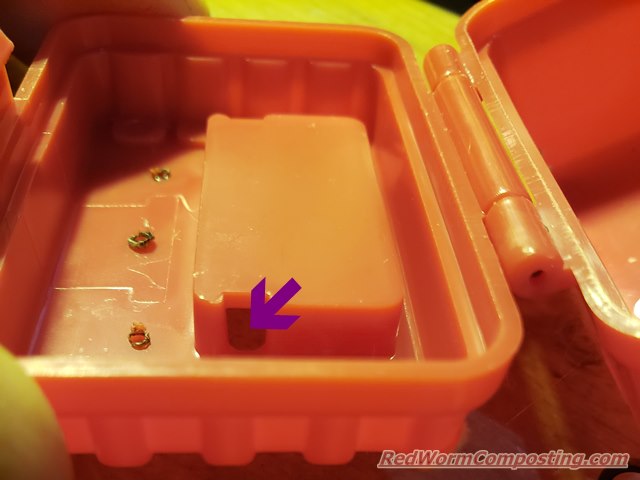 A worm bin just looks better with air holes in it, so I continued to melt more holes anyway. The next shot shows off my incredible hole-melting craftmanship, and how big the bin is compared to a Canadian quarter (our coins are the same size as American coins – but with more animals on them). 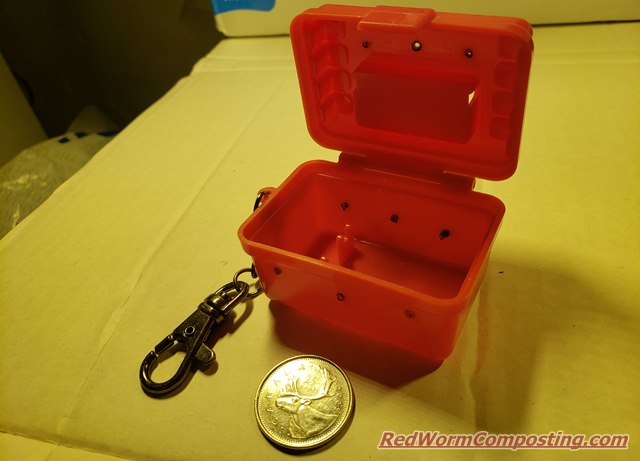 What is this? A center for ants? The building has to be at least three times bigger than this! ~ Derek Zoolander

Next, it was time to prepare my food scraps and bedding. I used banana peel, cantaloupe (a worm favorite), and lettuce for my food. Shredded cardboard for my bedding. 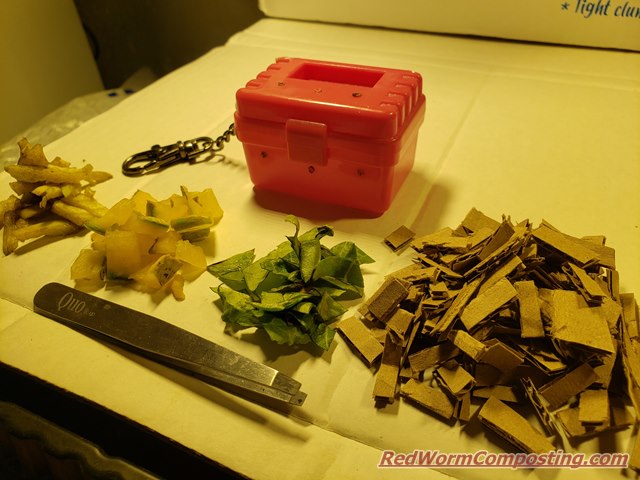 The first step for setting up the bin involved creating a “false bottom” of cardboard. As you can see in the second image, it was pretty thick but didn’t come up as far as the air holes. 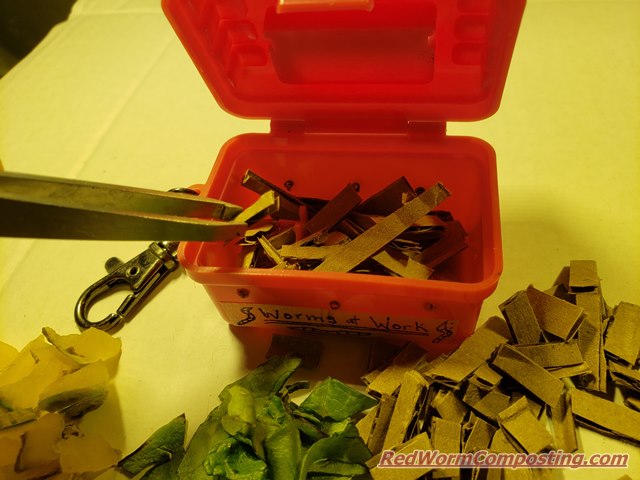 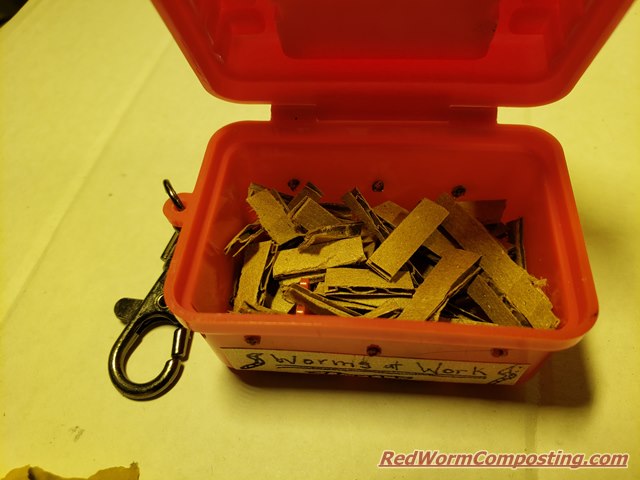 Then it was time to add my food scraps. I didn’t go too crazy, since it is important to be careful about over-feeding – especially early on! 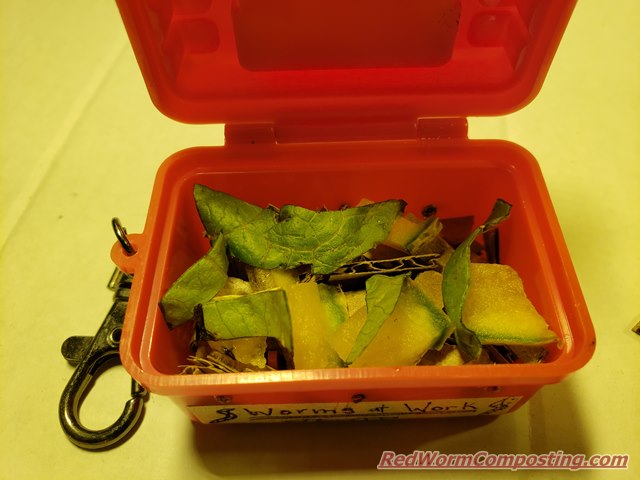 Everything was still a little on the dry side at this point, so I decided to add some water. 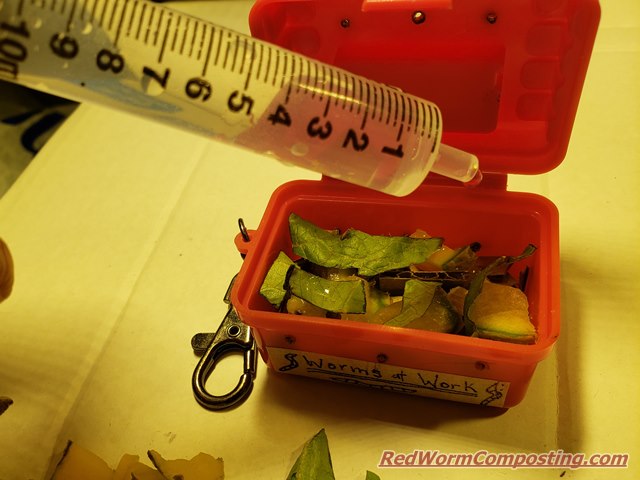 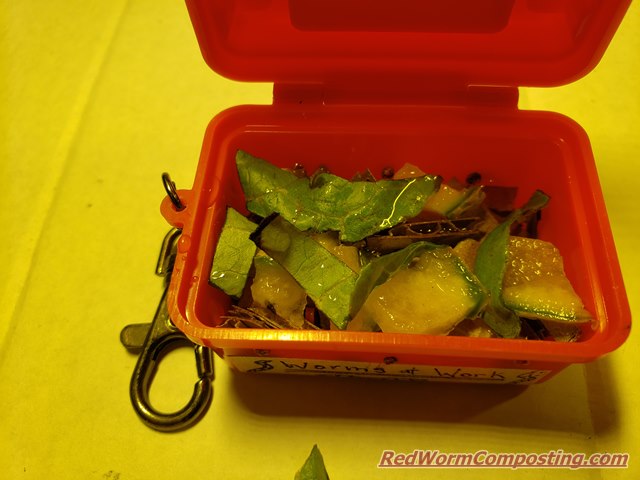 Tilting the bin a bit, I could see there was pooling down in the bottom. I normally discourage this, but in this case I’m not too worried. 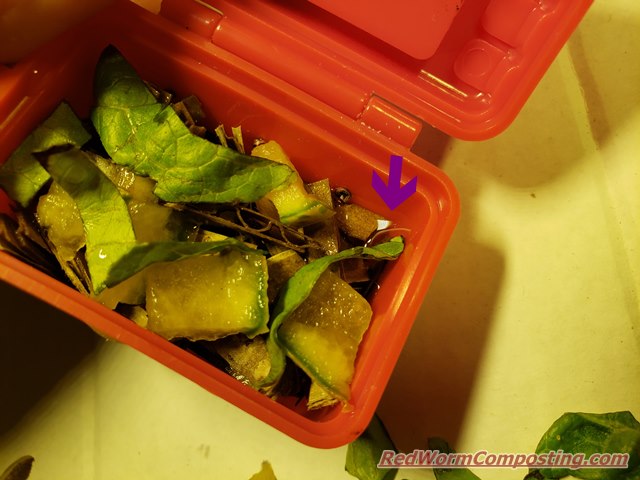 These next shots gives you some idea for how much material was still left by this point. We should have plenty of good stuff to keep this baby humming along for months! 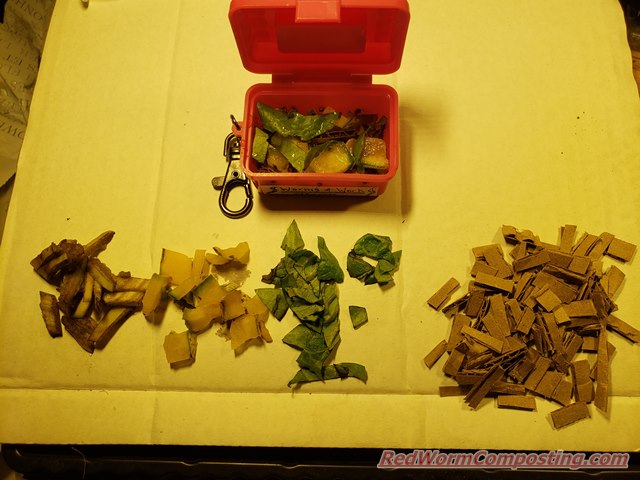 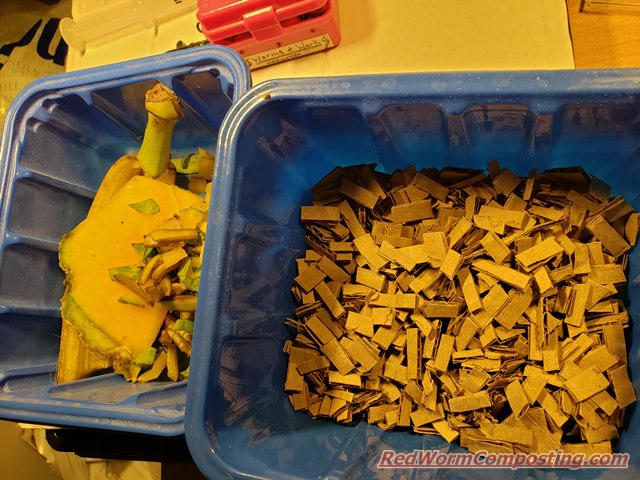 Of course, I was still only part way there with the worm bin set-up. I still needed my worms, and some microbes!

I collected a tiny bucket of “living material”, and four Red Worm cocoons, and then added everything to the bin. 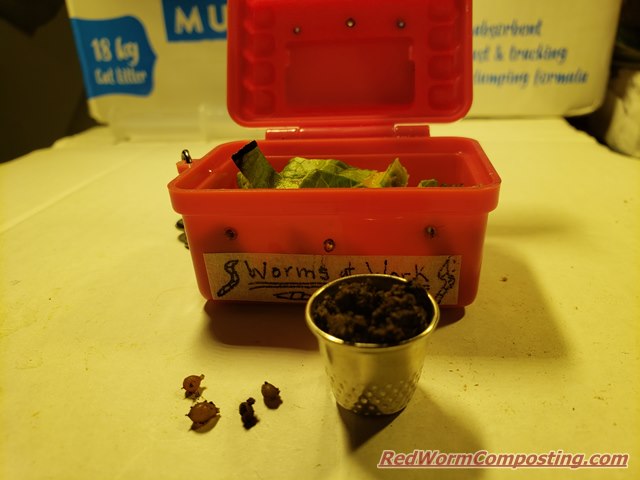 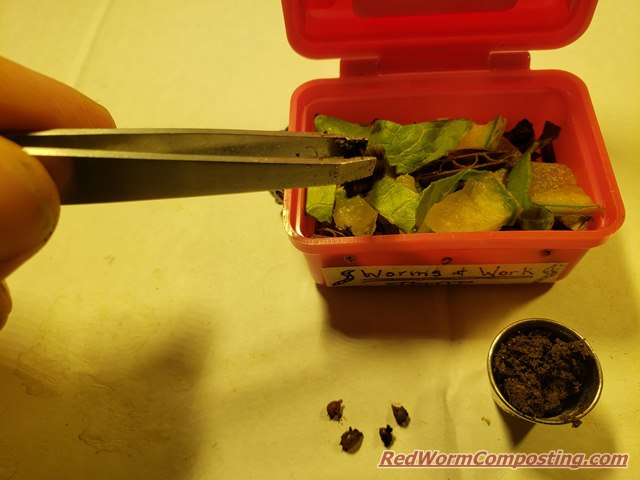 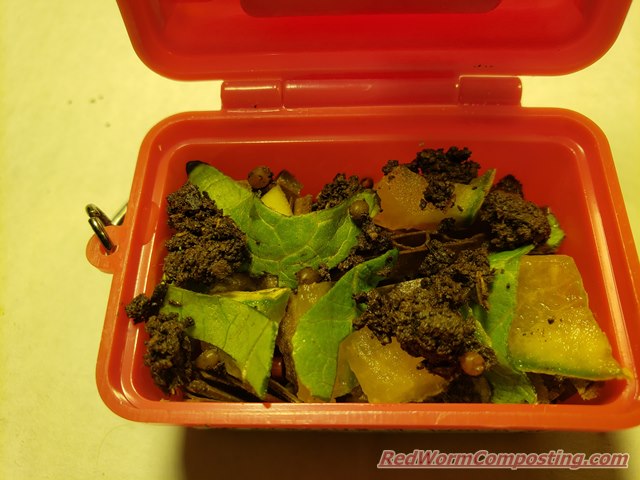 Turns out there was even a cocoon in my bucket, so that brings our total to five! I used my tiny worm bin tool to work everything in a bit (more than you see in image above) – this should help the cocoons stay moist and close to the food.

Last, but certainly not least, I finished things off by adding a cover layer of dry bedding. 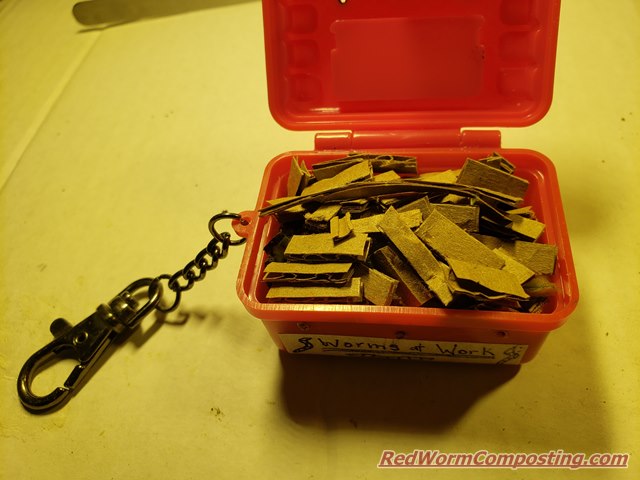 In case you didn’t notice it earlier, I also added a homemade label for my bin…just to make sure that no one mistakes it for a tiny lunch box, or anything like that. 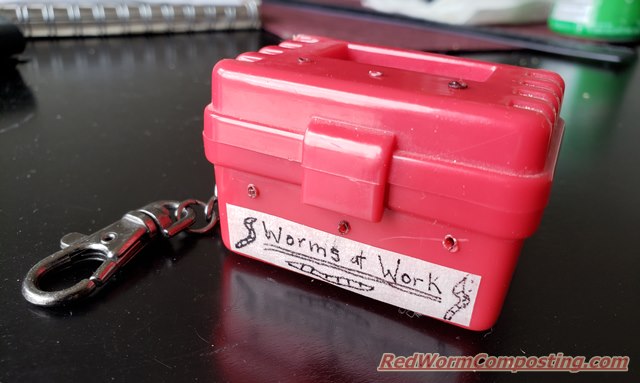 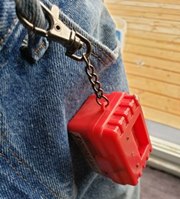 With my new tiny bin all set up and ready to go, I thought it might be fun to test out the keychain apparatus.

I might have to wait a few weeks, but I can’t wait to take my little worm buddies for walks around town and stuff like that.

Maybe I should e-mail Guiness Book of World Records and see if I can make it the “official” smallest worm bin in the world.

Even if it’s not, I think it’s going to be a pretty sweet little system!

I realize all this must seem overly silly to some…

…BUT, as per sometimes, there is actually some method to this madness.

A point I try to hammer home, as much as I can, is the incredible ability of composting worms to adapt to their environment. Once some little hatchlings emerge, they certainly won’t be moaning and gnashing their non-existet teeth about their cramped livings conditions. NO, they will be adjusting their (instictive) gameplan based on the conditions and resources available to them.

I am actually super interested to see what sort of impact the size of this system will have on population growth – and the size of the worms for that matter.

Speaking of size, I should probably share the actual dimensions of this bin.

I felt it was only fitting that I measured them using the tiny measuring tape that came with it (as part of a mini toolkit my wife and kids gave to me as a gag gift). 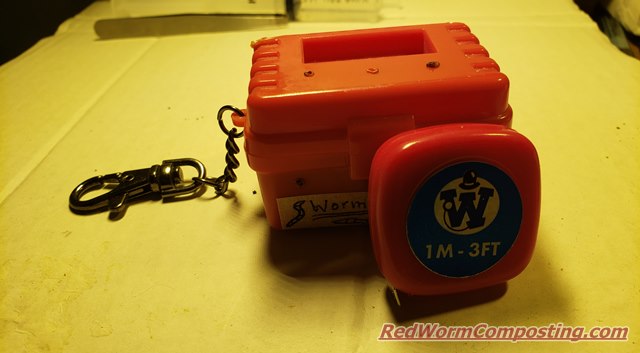 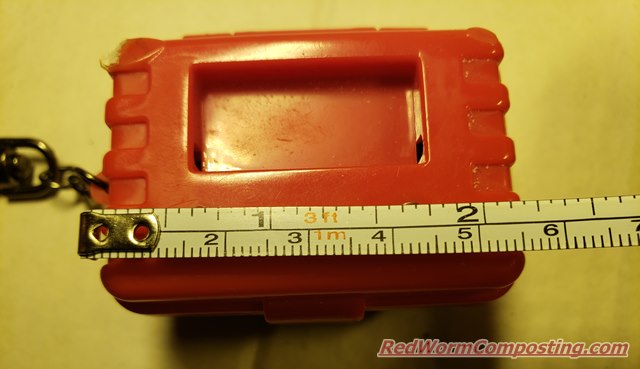 In other words, we’re talkin about a whopping 4.22 cubic inches of worm composting power under the hood!
😉

I’m looking forward to seeing how this system develops in the weeks ahead – and will be sure to keep everyone posted.