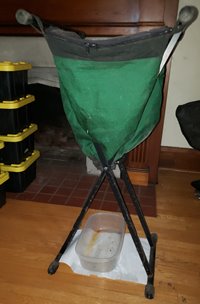 The last time I wrote about Worm Inns it was “Day 425” of my “Mega Reboot” project, more than two years ago (yep, the only thing consistent around here is how all-over-the-place I tend to be! Haha).

Since that time, I’ve discontinued most of my indoor vermicomposting activity here at home (where I am quite limited for space) and have shifted the focus over to my dad’s place. He has a large basement, and an empty first floor available – and has always been very supportive of my vermi-shenanigans.

Now that I am consistently getting over there at least once or twice a week for extended chunks of time, things are starting to gain a bit of momentum on the indoor vermicomposting front.

You know how you know that you are a “worm-head” when you look at all sorts of different containers and structures and imagine how they could be used for vermicomposting??

(Not a confusing sentence at all)

Well, one such “structure” at my dad’s place has been nagging at my “worm brain” for ages…until very recently that is (insert evil laugh). A former tenant left behind a metal keyboard stand when they moved out, and every time I looked at it I felt like it should be getting used as some sort of system stand.

I’m sure you are all in total suspense and have NO idea where I’m headed with this!
😉

So yeah, being on a serious roll with “worm bag” systems as of late (just look at recent blog posts to see what I am talking about), it was only a matter of time before my worm lovin “eye of Sauron” once again fixed its gaze upon the stand…and made something happen.

Earlier this week, I tested different worm bags to see if they would even fit on the thing, and it was one of my regular Worm Inns that seemed to be as close to “perfect” as I can hope to get…with a keyboard stand (lol). Let’s just say I should end up with a rather uniquely shaped Worm Inn system once it is really up and running!

Yesterday I got the ball rolling with a bunch of “scrunched” paper, some “living material“, and a bit of poultry feed. Similar to early set-up process with the VermiBag system, the main idea here is simply to establish a moist, microbially-active habitat.

Notice the larger quantity of scrunch-balls, and lack of newsprint floor this time. Sheets of newsprint didn’t really make much sense in this case since it would be much more challenging to get it formed to the contours of the Worm Inn walls. 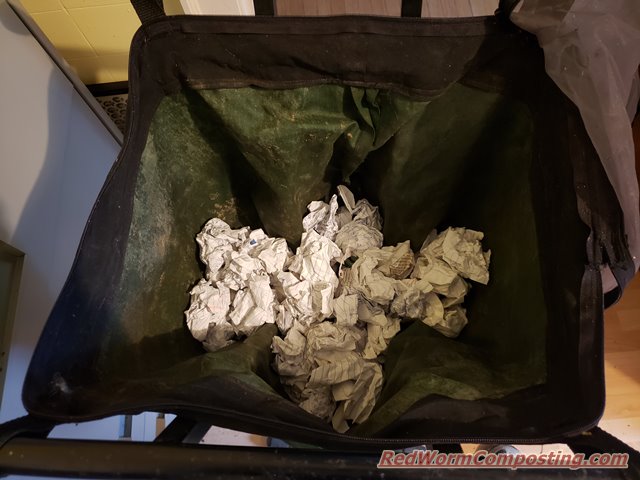 Once the initial heap-o-scrunch-balls had been added, I sprinkled in some living material from an active system, along with a sprinkle of poultry feed – and then sprayed everything down with water (using a plant misting bottle). 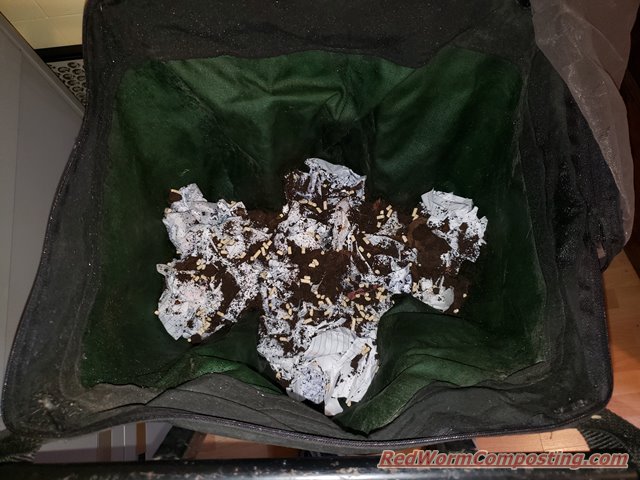 I prepped another layer in exactly the same manner, then added a plastic cover… 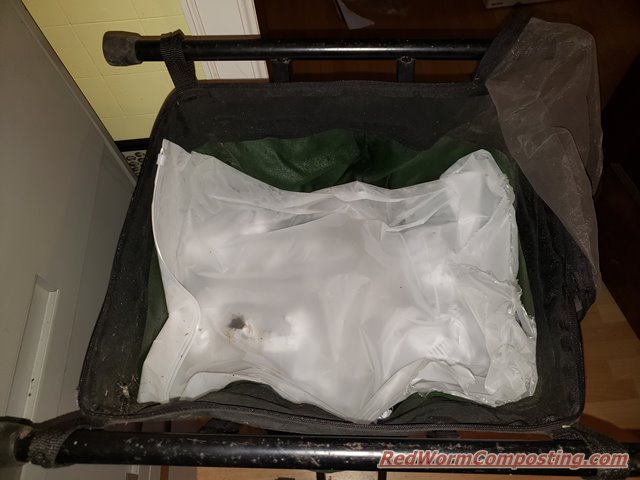 …before zipping up the screened lid. 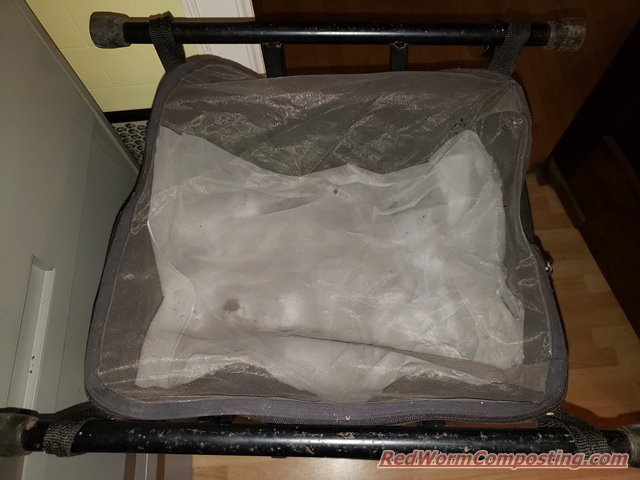 NOTE: One thing I noticed quickly was that without the sheets of newsprint, water much more readily dripped down the sides and out the bottom of the Inn. Not a big deal, since I am keeping a plastic bin underneath – but still worth mentioning.

As for the scope of this particular project…I’m thinking “scrunch balls” should play a prominent role. I’ve tested them out as a bedding material in the past – and they seemed to work well – but I wasn’t able to really monitor and assess the breakdown process as closely as I would have liked. Some other materials I would like to test out again are cloth (from old cotton-based clothing items) and cat hair.

Maybe I can do all THREE in this one system! You know me – I love livin on the edge (cue Aerosmith)!

Anywho…I will mull things over between now and early next week, when I hope to add the worms, and we’ll go from there.