I decided to move the plants from my “soil + vermicompost” experiment to larger pots this morning. Unfortunately, I was limited both in terms of pot selection and vermicompost supply so I had to make do with what I had. I ended up using four plastic buckets with holes drilled in the bottom (previously used for a tomato-growth experiment), and I added two cucumber plants to each one once they were set up with my treatment soil mixes.

Speaking of which – since I didn’t have enough WF-360 or Worm Inn vermicompost to create a 2:1 (soil:vermicompost) blend – at least not if I was to have any hope of filling the buckets – I settled on a 3:1 mix for all vermicompost treatments. As it turns out, even this didn’t leave me with enough soil mix to fill the buckets completely, so I ended up topping them all up with more black earth once the plants had been transferred. I’m not overly concerned with this change since it was consistent across all treatments, and we’re still left with a mix containing at least 20% vermicompost. This is also not even taking into consideration the fact that the plants were started in a 33% vermicompost mix. 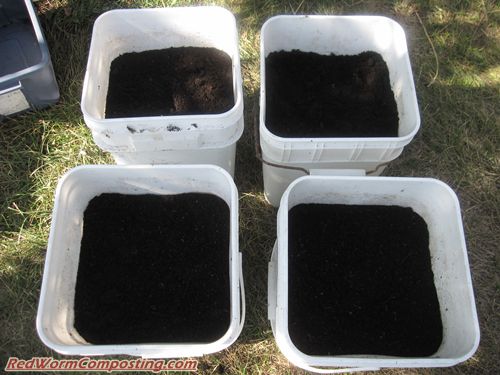 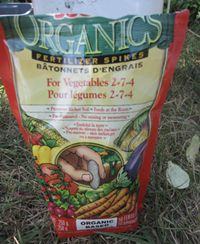 As mentioned in my last post (see links to previous posts below), my plan has been to add some “normal” fertilizer to all treatments as well to see if there are any obvious benefits above and beyond the NPK provided by the vermicompost.

I settled on “Jobe Organics” slow-release vegetable fertilizer spikes (2-7-4), and am using one for each plant (so two per pot). I simply pushed these down into the soil close to the edge of the original root ball (from the smaller pots). Once the spikes were inserted and the soil was topped up a bit I made sure to water each bucket very well.

As you can see (in the very first picture), the plants were already looking somewhat different from my last update. Of the three vermicompost treatments, the one containing Worm Inn vermicompost now seems to have the biggest/healthiest looking plants. This is a prime example of why we shouldn’t make generalizations or jump to conclusions based on any of the results in this experiment! I can only imagine what might happen now that the fertilizer spikes have been added to the mix.

One other interesting thing to make mention of before signing off. When I took the small bins of vermicompost down from the shelf they’ve been sitting on, I noticed that the WF-360 vermicompost had a pretty distinct covering of white fungal growth over top of it (see below) – while the other two basically looked identical to the last time I saw them. This was yet another reminder of the fact that this material likely wasn’t quite “ready” for use. As discussed in the comments section of my last post, rather than putting the moist WF-360 vermicompost in a bin down in my basement after it was harvested, I probably should have made more of an effort to dry it out fairly quickly. As I discovered this morning, there were even worms living it! (I removed most if not all of them, and mixed up the material very well before blending it with the soil) 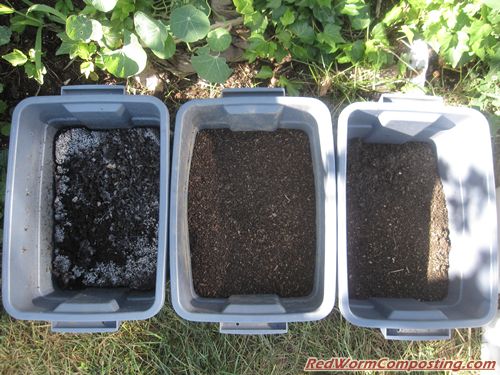 Anyway, it will be interesting to see what happens now! I have little doubt that the soil-only treatment plants will start to play catch-up now that they have access to more nutrients. What remains to be seen, though, is whether or not the vermicompost treatment plants will still end up growing more vigorously and producing more cucumbers.
8)