It’s been a little over a week since my last plastic worm bin follow-along post. As you may recall, I had somehow ended up with bad infestations of both fruit flies and fungus gnats (yep, and I’m the “expert”! lol).

Well, the good news is that my multi-pronged fruit fly eradication strategy (or M.P.F.F.E.S. for short) seems to have worked very well! Not only are we not being bothered by fruit flies up on the main floor of the house, but I’m not even seeing any down in the basement (where the bin is kept) any more! As for fungus gnats – I am still seeing a fair number of them, but it does seem like the population has declined.

One additional step taken on that front involved rounding up all the neglected parasitic nematode cultures I had going (and what was left of the supply I ordered last year – still sitting in the fridge) and added everything to the bin. Given how long these cultures (and bag in the fridge) have been sitting, I was not at all optimistic that there would be many – if any – viable nematodes left to help me out.

In an effort to at least help protect some of survivors from the worms (which have been shown to consume and kill them), I added the cloths/rags from the culture bottles and then poured my nematode suspension (nematodes from fridge mixed with water) directly onto them. 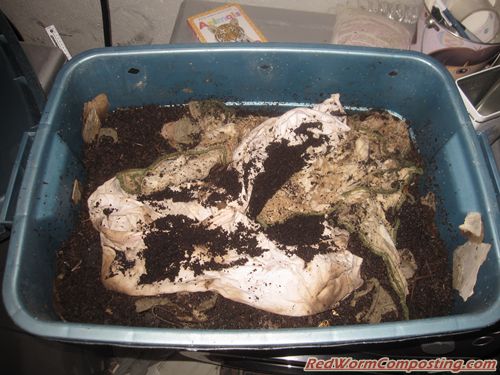 Like I said, the gnat population does seem to have decreased, but in all honesty I’m seeing no evidence of parasitic nematode activity – so it’s hard to say if that’s had an impact. I’m sure the presence of the worms alone would have an impact on the success of the gnats since the worms are basically competing with gnat larvae for food.

Apart from the gnats, everything seems to be coming along nicely in the bin. As you can see in the first picture below, the level of material has dropped down a fair bit and the surface has that flattened appearance indicative of an active worm population. Digging around a bit I found lots of healthy-looking, responsive worms, more than happy to move down away from the light as they were exposed (off-colored, sluggish worms can be a sign that all is not well in the system). I even found a collection of new cocoons which, interestingly enough, were all deposited on/near one of the cloths. 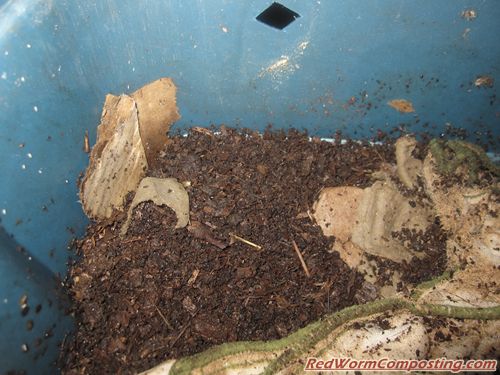 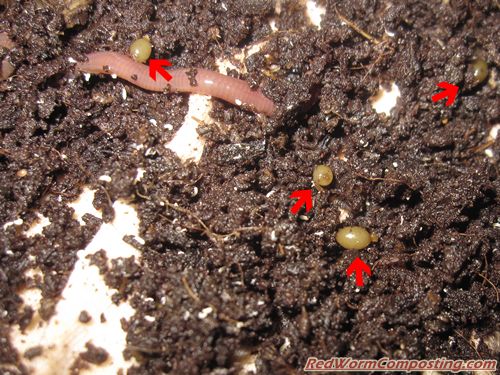 Given the fact that the fruit fly population seems to have been all-but-wiped-out, I decided to push my luck a little by adding some actual “food”. I didn’t happen to have any frozen-then-thawed food wastes on-hand (since I assumed I wouldn’t be feeding this week), so I chose something that would break down fairly quickly, even when added fresh – watermelon! I did, however, “optimize” it a bit by chopping it up before adding it to the bin.

The total weight of watermelon added was only 305 g (0.67 lb). This is probably less than what I’ll be adding for a “normal” feeding, but for now I’m just going to play things safe to make sure I don’t end up back in real trouble with fruit flies and gnats again! 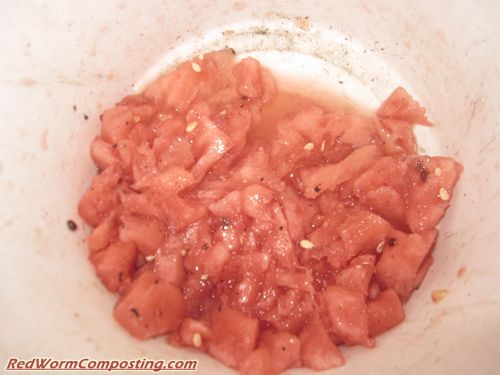 My preferred method for adding food wastes to most systems is some form of “pocket feeding”. This simply involves creating a depression, adding the wastes, then covering well. 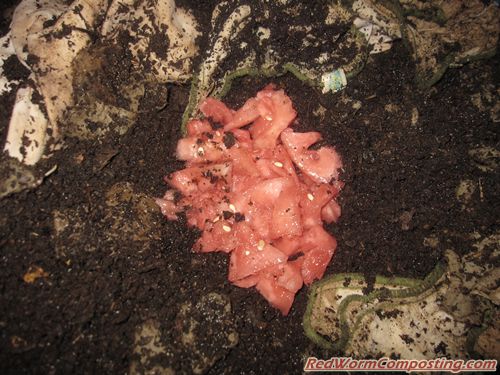 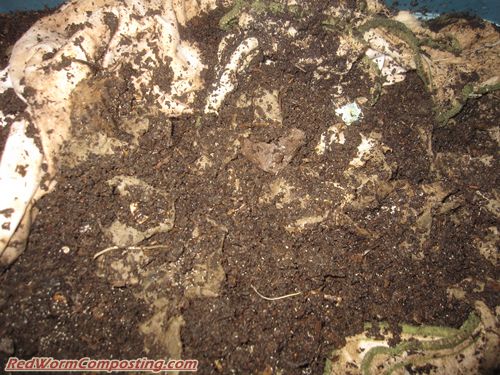 With a mature bin/bed and/or with really wet material, I’ll often add some dry bedding in the bottom of the hole first – but in this case, I don’t mind adding a bit more liquid to the bin given how recently it was set up. Another reason I’m not too concerned about adding this extra liquid is that I ended up adding a fairly thick layer of dry bedding over top of the composting zone. Maintaining this layer of bedding is a great way to keep the upper sides and underside of the lid fairly dry (and excess bin moisture absorbed) – thus discouraging any worm roaming. It’s also an easy way to ensure that new bedding materials are regularly getting mixed in with the food wastes, thus helping to keep things a lot more balanced over time.

As you can see below, I used regular shredded paper for my upper bedding layer. This may surprise some people since I often caution the use of this material as a worm bin bedding. It’s important to point out that I’m only really concerned with this approach when people want to use it as a primary bedding for their initial bin set-up. This type of paper (especially the bleached office paper) can contain chemicals that will irritate or harm the worms – plus it’s not really an ideal material for promoting air flow since it tends to clump together. Used in moderation once your system is already set up, however, should not create any issues.

NOTE: If you DO ever want to use a lot of this material at once, my recommendation would be to soak and drain it multiple times before adding it to your bin (and again – remember to keep an eye on that pooling of water down in the bottom of the bin) 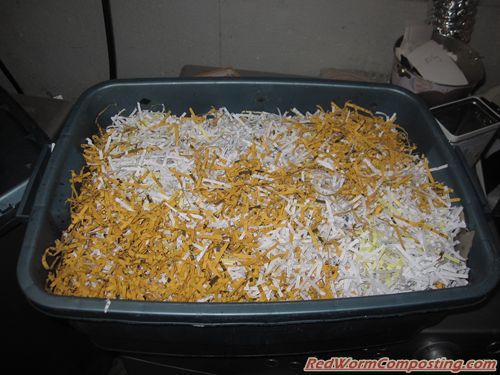 All in all, I am pretty happy with our progress thus far! I thought for sure that the fruit flies were going to be a real headache, so I’m glad to see that “problem” taken care of already. Hopefully the gnats will continue to decline over the next few weeks as well.