I’ve decided to go “back to my roots” in a sense by setting up my very own plastic enclosed worm bin. In recent years I’ve moved away from this approach in favor of larger, open vermicomposting systems along with various other “fancy” home systems (eg. Worm Inn, Worm Factory etc). Regardless, I still feel it’s a great (easy/inexpensive) option for those wanting to give vermicomposting a try – and a very popular choice among those new to the field. As such, I want to continue educating people on how to set up and use these types of systems.

What better way to help people than to set up my own plastic bin and share the experience here on the site? While I still feel my advice about these bins is on target, I think it will be really helpful for people to see everything laid out step by step, as it happens. One of my shortcomings as a vermicomposting educator is that I’ve reached the point of doing a lot of things in more of an instinctual, “gut feel” manner, so some of my advice can probably seem a little vague or even wishy washy at times.

I still stick to guns about the fact that every vermicomposting system is different (and the importance of acknowledging this), but still, I’m sure it would be nice to at least see the exact steps I am taking with my own bin, along with all the other relevant information (tips, warnings etc) I include with my updates.

It’s a Rubbermaid Roughneck Tote measuring ~20″(length) x ~14.5(width) x ~8.75″(depth) on the inside. I seem to recall the volume being somewhere in the vicinity of 58 liters (~15.3 gal). This is what I consider to be my “favorite” Rubbermaid bin size for Red Worm Bins – I use a deeper model for European Nightcrawlers.

I always try to steer clear of cardboards with glossy surfaces, colored inks etc, so all my cereal/cracker etc boxes go into the recycling bin, NOT my worm bins (once in awhile I will use some colored corrugated cardboard though). Same goes for glossy paper – I never use magazines/flyers as a bedding material. There is obviously some gray area here – it’s pretty tough to find newsprint that is strictly black and white these days, so my advice is not to worry TOO much about it if newsprint is your material of choice. 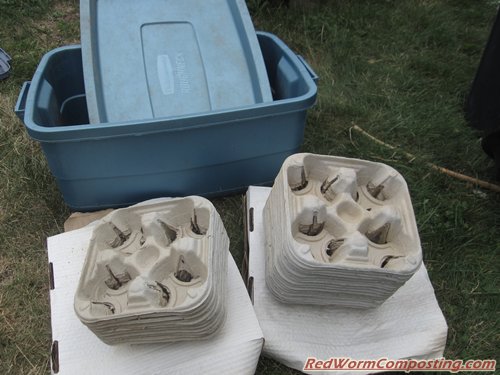 The first thing I did with the bin was cut my air holes. In the past, I likely would have just used a drill, but I’ve come to appreciate the value of larger holes cut using a jackknife or box cutter. For one thing you are not left with jagged bits of plastic on the inside of the bin where the holes come through, and of course, these larger holes also allow for greater air flow.

I cut 6 of these holes in my lid and 6 (3+3) along the upper sides of the bin – that’s it! I definitely prefer the K.I.S.S. approach these days, so I’m no longer a big fan of drainage holes, double stacked bins etc. But I don’t say that so as to discourage others from taking that approach! Whatever floats your boat.

The first thing I did was shred up my cardboard, starting with the pizza boxes. I included a shot below with a measuring tape to give people some idea of my recommended shredding size (obviously not set-in-stone, but might be in the range of 2″-4″ on average). You will also see how full the bin was once I had shredded up the last of the drink trays. One thing I’ve noticed with a LOT of (newbie) worm bins is that people have a tendency to skimp on bedding materials. There’s definitely no need for this -bedding is your friend!
😆 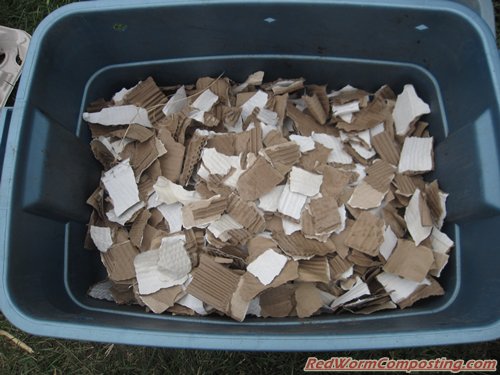 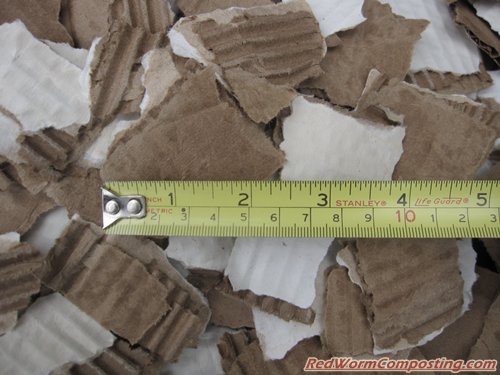 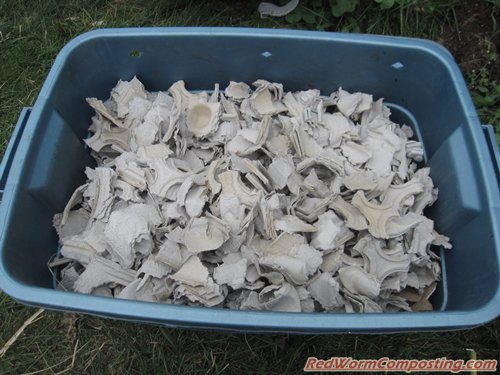 The waste materials added to this bin were frozen-then-thawed kitchen scraps – about 6 pounds worth. There is no particular rationale behind using this amount (just happened to be the quantity dumped out of the bags I selected), but it IS important to point out that this bin is being aged for awhile before worms are added. So, the amount added initially is far less of a concern. As you’ll see in future updates, I’ll almost certainly be doing some course-correction during the aging period – so my aim here is really just to get a fair amount of food waste mixed with a lot of bedding and to let the microbial community get a solid foothold.

Here is a list of some of the materials I observed in my mix: blueberries, lemon halves, banana peels, 3/4 of a turnip, paper towel, rice, shredded carrots, bread, pepper cores, apple core, celery, pasta, tomato stem, and potato peels. Definitely some starchy stuff in there, but it’s important to note that I rarely add large quantities of these types of wastes to my scrap-holding bags.

The mix was definitely a lot bulkier than I wanted, so I decided to cut it up quite a bit (you can see the before and after below). This will help the microbes get established more quickly and help to prevent the formation of serious anaerobic zones. 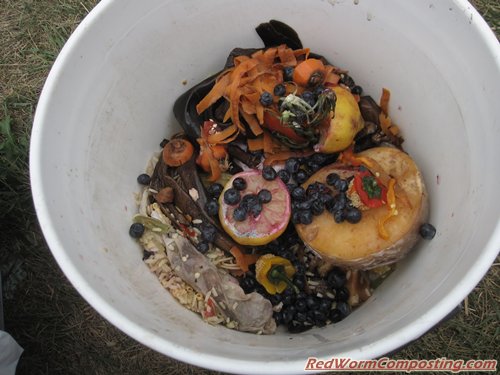 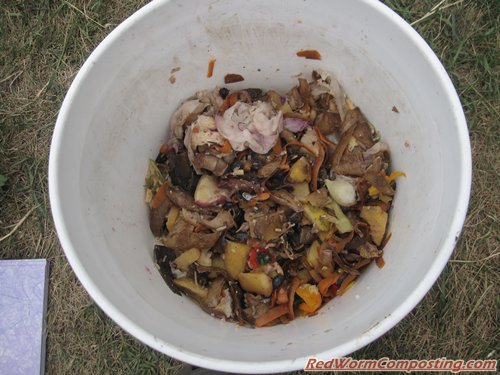 In some of my early YouTube worm bin videos I recommend adding a pinch of soil to a worm bin when setting it up. Apart from the fact that this really isn’t necessary, I’ve found that some people just seem to take that advice a run with it – adding bagged soil as a bedding material, for example! lol

So let’s steer clear of “soil” altogether and focus on “living material” instead. This is a term I’ve been tossing around a lot on the blog as of late – and something I should probably elaborate on for those who aren’t sure what I’m referring to. I’m primarily talking about any rich, earthy material that’s gone through a decomposition/stabilization (i.e. “humification”) process – such as various types of compost, well-aged manure, decomposed leaf litter etc – but really, any old partially decayed organic matter may fit the bill. These materials are great for inoculating your worm bin/bed with loads of beneficial microbes (and other organisms) and/or helping to keep your system in balance later on.

I have loads of “living material” on hand – and you know how much I LOVE using it – but I want to keep this case study as “typical” as I can, so I only added a small amount of very well-aged, bedded horse manure (dark in color, earthy smelling) – it was simply ground up and sprinkled into the food waste. 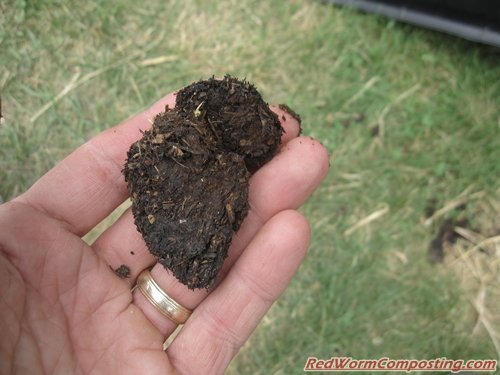 Adding the waste materials to the bedding didn’t involve any special techniques or strategies (such as layering etc) – I simply dumped it on top then mixed everything up. The idea is to get the wastes as spread out as possible, again with the aim of avoiding the development of anaerobic zones. 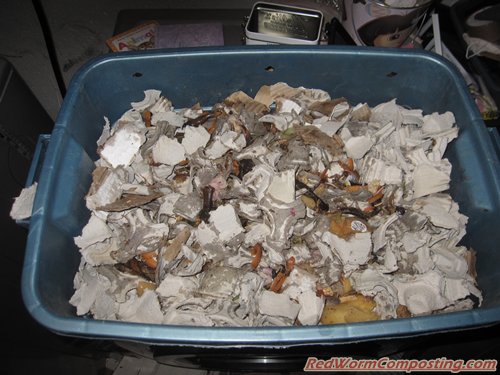 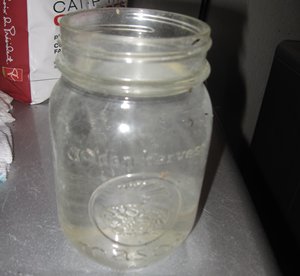 Some of you may be wondering about adding water (since my bedding was bone dry when added). In all honesty, given the moisture content of the waste materials, I probably would have been fine just leaving everything as is for the time being – but I ended deciding to add some water for the sake of (hopefully) speeding things up a bit.

As per usual, nothing is set-in-stone here, and I will definitely be making adjustments before the worms are added, but for those are curious, I filled a standard mason jar with aged tap water and slowly poured it over the mix in the bin.

I finished off the bin by adding a layer of dry shredded cardboard – this time created by tearing up toilet paper and paper towel rolls. 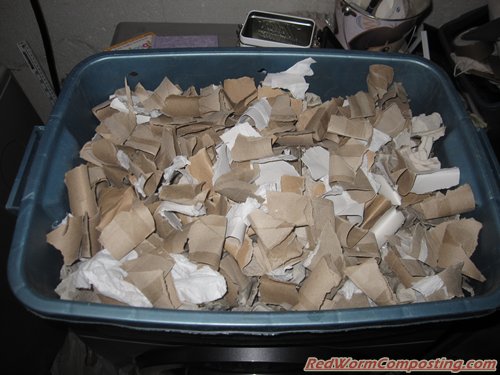 Now it’s time to let the bin sit and age for at least a week (personal preference – not mandatory). If you DID want to get started more quickly – i.e. add the worms the same day or soon after setting up – my recommendation would be to mix in a lot more (high quality) living materials, and to be more careful with the amount of waste that’s added. Keep in mind that the habitat should be well-moistened without a lot of liquid pooling on the bottom, and there shouldn’t be strong foul odors when the worms are added. One potential “fix”, though – aside from mixing in more dry bedding -would be to simply leave the lid off with a light shining over top for the first few days (so please don’t assume that a stinky/wet bin can’t be used).

OK – that’s enough of an eyeful for one post!
I’ll aim to provide an aging update towards the end of next week.
Stay tuned.
8)

P.S. One thing I forgot to mention is that this bin is being kept in my basement. I don’t recommend using plastic tub systems – especially enclosed ones – outside during hot(summer) or cold(winter) conditions. I’m not saying it CAN’T be done (in certain locations, taking various precautions etc) – but it may be more challenging (or even virtually impossible in some locations).

A Tale of Three Vermicomposts