I had hoped to get a “plastic bin follow-along” update posted last week, but alas it just didn’t happen. The good news is that I DID manage to check up on things (and take pics), and I even added my Red Worms on Thursday. As far as the bin being “ready” for the worms, everything looked and smelled great. The bedding was thoroughly (and evenly) moistened – yet there was no pooling on the bottom of the bin, and everything smelled fairly earthy (i.e. no foul, anaerobic smells) when I dug around. 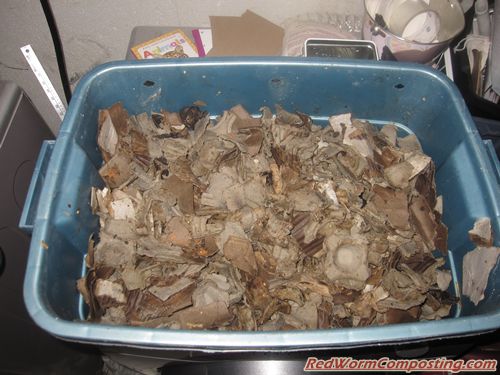 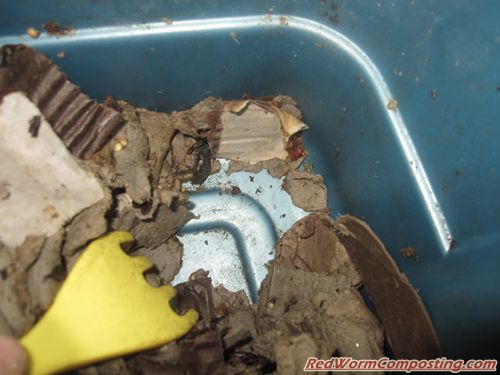 I noticed a number of different critters in the bin – nematodes seemed to be especially abundant. Normally these guys are so small that they are basically invisible (some people confuse them with white worms, though, which are easily seen with the naked eye), but when you get loads of them all together they almost seem to form a larger organism. They were most noticeable on the edges of the shredded cardboard pieces, where they grouped together in small undulating string-like masses. I can only imagine how many there must have been in the entire bin! Just so you know, these guys are certainly nothing to worry about, and in fact I have little doubt that the worms will end up consuming a lot of them before too long. 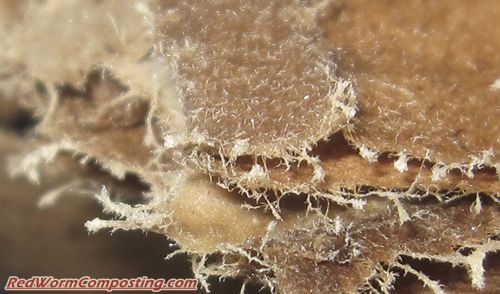 On a more frustrating (but interesting) note, I ended up with a pretty serious fruit fly infestation during the aging period. The timing seems to coincide with me adding those lemon pieces to various indoor systems (see “Citrus Vermicomposting Update“), but it’s hard to say for sure. Regardless, last week we ended up with clouds of these little annoyances all over the house (which didn’t please my wife too much – haha), so I knew it was important to strike fast and effectively.

Unfortunately, this meant collecting ALL bulky food materials – namely pieces of lemon and zucchini – from my indoor bins and dumping them outside, vacuuming up adults like a madman on multiple occasions, and making a bunch of fruit fly traps (I think I currently have 7 of them). These traps are very easy to make – basically all you need is a jar with some apple cider vinegar and a drop of detergent in it. I’ve found that narrow neck bottles work really well even without any sort of plastic wrap over top, whereas I prefer to use the wrap (with fork holes in top) on the wider jars and bowls since it helps to prevent the flies from getting back out. 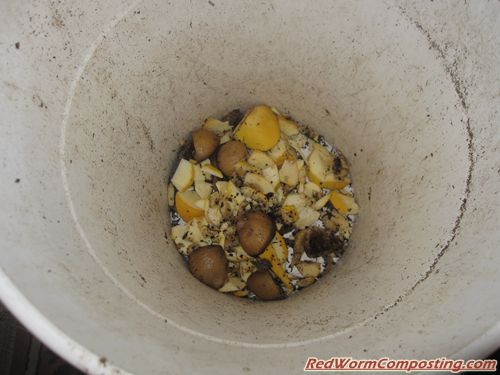 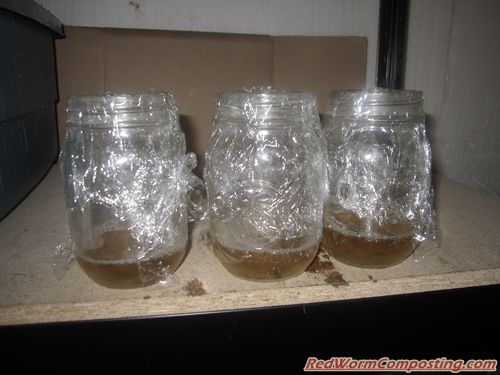 My multi-pronged fruit fly strategy seems to have worked very well since there are far fewer of them in the house now. From the looks of things, the traps alone have captured hundreds of them! It’s important to point out, however, that I’m definitely not out of the woods as far as my worm bin goes – but we’ll get back to that in a minute.

In case you are wondering, the reason it’s SO important to remove bulky food wastes right away is because these materials can become prime fruit fly breeding grounds. They remain intact for much longer so you can end up with wave after wave of the flies hatching out. Getting rid of these potential “nests” and lots of the adults (via vacuum and traps) can go a long way towards bringing about a population crash. Needless to say, it’s also important to stop adding food wastes (even those that have been optimized) – and instead to add only bedding materials for a little while.

Unlike a lot of my experiments, where I tend to just add some non-specific amount of wormy material to my systems, for this project I’ve wanted to get as close as I can to a “typical” new vermicomposter scenario as I can. As such, I decided to add 3 bags of same “Red Worm Mix” I sell up here in Canada [in case you are new around here – all worms sold from the RWC website are sent to customers via U.S. worm farmers/drop-shippers] – I generally recommend 2-3 bags for a typical home worm bin. There is no exact/specific quantity of worms these bags contain, but I’ve reached the point of knowing what sort of densities of worms I want to see before bagging up the material for customers (i.e. I spend time removing excess habitat material until those desired densities are reached).

I really like the “worm mix” approach since it’s more of a “natural” way to add Red Worms to a composting system. Apart from there being plenty of adults, you end up with lots of baby worms and cocoons, along with a substantial quantity of the habitat material (and associated ecosystem) they live in. This helps to inoculate the new bin with lots of beneficial organisms, and also helps the worms to feel more “at home” right off the bat. This combined with the lower densities of worms (vs “pounds”) also helps to ensure that you won’t experience much in the way of (if any) worm roaming early on. 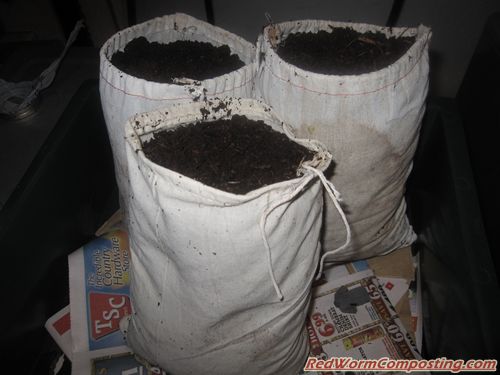 Adding these bags of worm mix simply involved dumping them over top of the bedding material in the bin and gently mixing everything in. I then just put on the lid, and set the bin back on the shelf where I’ve been keeping it. If I was more nervous about worm roaming, I might have added a thick layer of dry bedding over top of the composting zone, and/or put the bin some place under a bright light – since both of these can help to keep the worms down, resulting in the faster creation of a habitat that seems more familiar to them (obviously not necessary in my case given how much of their original habitat material went in with them). 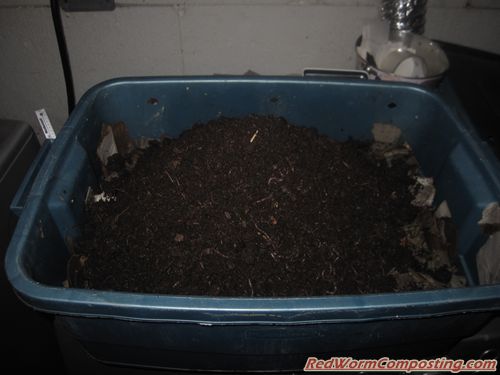 Getting back to my flying pesky critter situation…

One additional – and rather amusing – development since last week is the fact that I seem to not only still have plenty of fruit flies in the bin, but I now also have a healthy population of fungus gnats (can’t say I’m too surprised since I’ve been finding a fair number of them down in the basement for a little while now)! This is really turning into the “ultimate” newbie case study, isn’t it?? LOL

If nothing else, hopefully the early presence of these critters in my worm bin will at least demonstrate that many years of experience doesn’t necessarily guarantee that you no longer get fruit fly and fungus gnat invasions. As always, I’m sure this will also help to make this into an even more educational experience for everyone!

I’m not overly worried about either of these pests to be totally honest with you. As the worms become well-established in the bin there will be far less available habitat and food for the fly and gnat larvae. Hopefully the “ecosystem” that came with the worms – which includes some predatory rove beetles and their voracious larvae – will also help to take care of the situation.

Manure in a Home Worm Bin