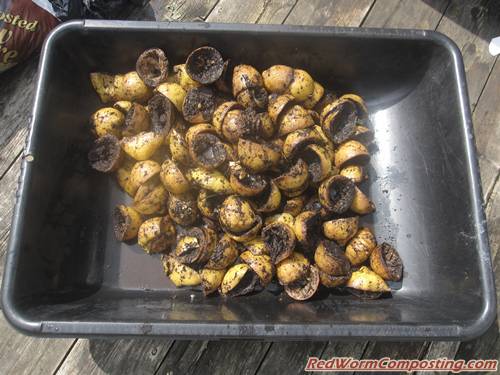 I’m sure some people must be wondering how my citrus vermicomposting experiment is coming along. Well…the “bad news” is that my outdoor beds didn’t prove to be the ideal testing grounds for this sort of thing, so I ended up letting the whole thing fall by the wayside…until recently, that is. I should quickly mention, though, that the citrus waste materials DID seem to break down quite quickly in the outdoor beds – almost “too quickly” – but this actually served as a reminder of the fact that it’s really only the smaller indoor systems where citrus wastes are going to have the potential to cause issues.

In light of this, I’ve decided to do some testing in some of my indoor systems instead. Apart from being more relevant for the average vermicomposter, it will also be a lot easier to see what’s happening (my indoor bins don’t get disturbed nearly as much as my outdoor beds). It is ALSO a good way for me to get things going again with yet another project that kinda fell by the wayside – my springtail experiment!

On Saturday I collected some fairly “fresh” juiced lemon halves from a bin of coffee grounds I had picked up the same day (as you may recall, it was the frequent presence of these lemons in my coffee grounds that gave me the idea for the citrus vermicomposting in the first place). I rinsed them off and cut them all in half again before putting…uhhhh…half of them in the bins right away, while the other half of the halves (confused yet? lol) went into the freezer. These frozen halves have now been placed in the bins as well (as you can see below, I took my pictures shortly after adding them – they’ve obviously thawed out since then).

The bins being used for this experiment are: 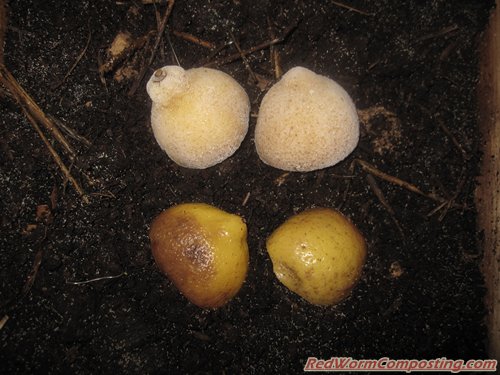 2) My two springtail experiment bins (one with springtails + worms, one with only worms) 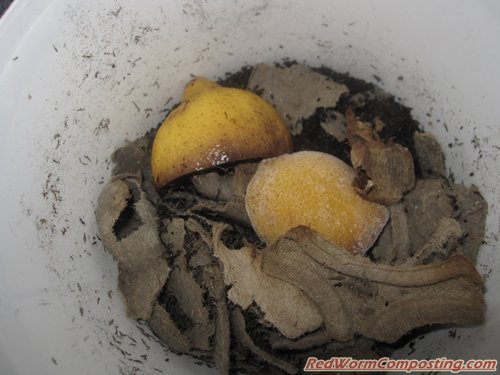 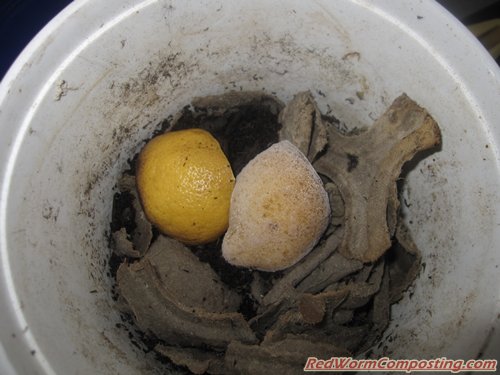 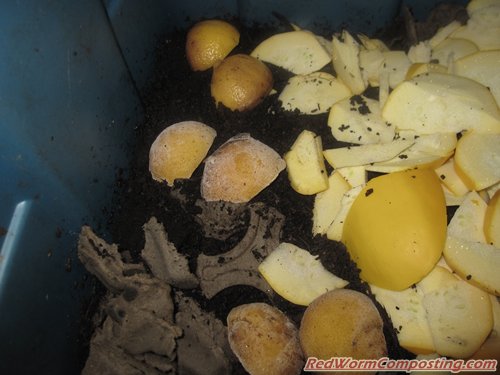 The idea here is to see how quickly these pieces of lemon will break down in these various bins, and whether or not freezing them beforehand makes a difference. I’m actually thinking this might be a case where freezing doesn’t help at all – citrus rinds are pretty resistant and I don’t imagine freezing them does much to break down their structural integrity. Nor do I think it has much effect on the oils in the rind (which should also contribute to a slow decomposition).

I’m really interested to see if there is any difference when springtails are present. One thing I’ve noticed is that they tend to congregate on a lot of less-worm-friendly materials (including citrus wastes) well before the worms seem to take an interest in them.

The worms in the wooden flow-through bin seem extra hungry these days, so I will likely need to start adding some other food fairly soon – I will make sure to leave the lemon zone open though so I can continue to monitor their decomposition.

I hope to have another update in a week or two (depending on how quickly things change).
Stay tuned!
8)