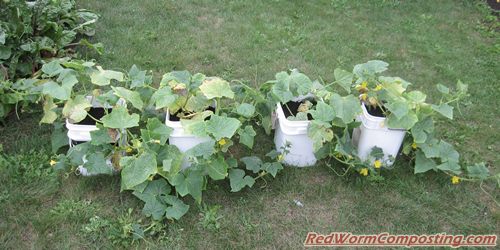 I figured I should post one last update for my vermicompost comparison experiment, rather than simply letting it slide quietly into oblivion (LOL). As is often the case with my fun experiments, the actual design of this one really wasn’t thought out all that well, so the results are pretty wishy washy at best.

As you may recall, I moved two plants from each treatment into a larger bucket (containing more of the same soil mix as they were already growing in). It’s safe to say that – while certainly more realistic than growing the plants in tiny pots – growing two cucumber plants in a single small bucket (in mostly hot dry weather) isn’t the best way to promote healthy plant growth.

As you can see above, most of the plants look quite similar. The black-earth-only treatment (with slow-release fertilizer like the other treatments) seemed to grow a bit more slowly out of the starting gates and definitely exhibited more yellowing of the leaves, but when it comes down to it they are all looking pretty rough by now.

There seems to also be a slight difference in terms of cucumber production between the vermicompost treatments and the black-earth-only treatment. The vermicompost-fed plants seemed to have at least one or two “larger” pickling cucumbers (similar to the one below), whereas the black-earth plants only had a couple of smaller cucumbers. 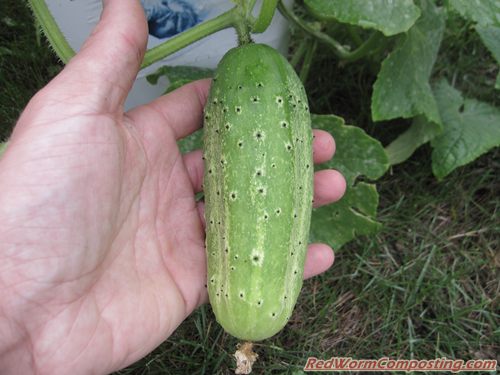 As far as the 100% vermicompost experiment goes, I actually ended up doing nothing further with it (no more watering) after my last update. Interestingly enough, the treatment that demonstrated the greatest drought-resistance was the control (100% black earth)! Yet another (potential) reminder that pure vermicompost (decent finished stuff, that is) is not necessarily the best “soil” for your potted plants – you’re probably better off to use it as a component of your overall soil mix.

How Did Your Garden Grow?