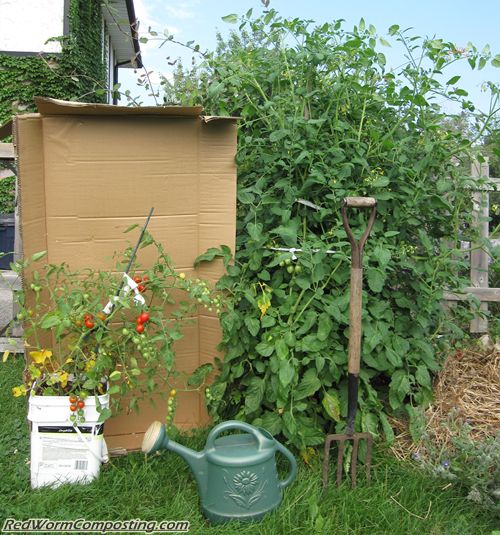 I have a sneaking suspicion that I will be finishing things up with my bucket tomatoes sometime over the next couple weeks, so I think it might not be a bad idea to write some posts about about them, and just generally about my tomato growing this season (should have a hanging tomato update for tomorrow).

I apologize for the ugly slab-o-cardboard in the picture above, but unfortunately it’s a real challenge to capture the outline of vegetation in my backyard jungle – it all blends together!
😆

I’ve reached some conclusions about the use of hybrid (composting/garden) systems – at least as far as tomatoes are concerned. The smaller the system, the smaller the plant is going to end up! And yes, I feel pretty darn sharp sharing that little pearl of wisdom!

OK, so perhaps that was a pretty obvious expectation! Haha
What I didn’t expect though, is just how much of a difference it can make when you provide the tomato roots with room to spread out! The plants in the first picture are both of the “Tomatoberry” variety, yet one is many times the size of the other one (the big one is as tall as I am). Don’t get me wrong though – I love my little bucket plants too, and have been grazing on the bright red (and oh so sweet!) fruit almost daily since they started ripening a while ago! The huge trench plants are definitely taking longer to produce ripe tomatoes – but when they do, LOOK OUT!

You probably won’t be too surprised to learn that I’ve had loads of fun trying to properly support these trench (and raised bed) plants. In fact, I basically just gave up on most of them (the one pictured above is pretty well the only one that I would consider well supported). You can see below what one of the unsupported plants looks like. This is likely the biggest among them, but as you can see they are certainly taking up quite a lot of space! 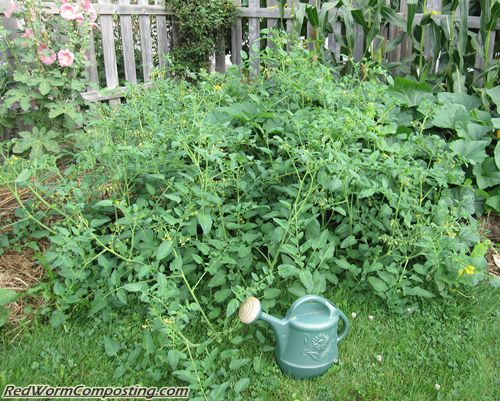 The success of the tomato plants growing next to (and within) my trench beds definitely has me excited – making me wonder what would be possible if I were actually an experienced (or more accurately a talented) tomato grower. If they were properly supported and pruned, and grown in an organized manner I suspect one could produce a pretty substantial crop (it will be interesting to see how many tomatoes I end up growing as it is!). I have some ideas re: how I can potentially take all this to the next level in future growing seasons. I am a tomato fanatic through and through, so I’m certainly pumped about the fact that they seem to do so well in “vermi-gardening” systems.

Not sure I will bother with the bucket approach next year – or at least not with tomatoes. Like I said, I’ve certainly grown plenty of yummy tomatoes on these plants, but I’ve also found them to be a bit of a hassle (and somewhat unsightly), so it might make more sense to concentrate on doing things properly!
I should mention that the wooden box tomatoes have definitely done quite well (as I think I already mentioned in another post) – certainly far better than the potatoes last year – so there is a reasonably good chance I would try that approach again!

And what about the hanging systems?

Well, you’ll just have to wait until tomorrow to find out!
😉