Early last month, I wrote (excitedly) about my recent discovery of “Straw Bale Gardening” (thanks to a presentation I watched during the Homegrown Food Summit). I made firm plans to try it out this season.

Not long after writing that post, I started “shopping” for local straw/hay bale sources, and even picked up 5 bales to get the ball rolling.

[ASIDE: You know you are a “city guy” when you imagine fitting 5-10 bales in a station wagon. The farm girl who helped me me load up laughed when I had to basically drop-kick the 5th bale, just to get it onto the front passenger seat, and the door closed! lol]

Then I smartened up a bit…

Last Thursday I had 30 bales of hay dropped off in my driveway ($5 a bale, delivered from nearly an hour away. I definitely feel lucky to live in an agricultural zone).

I was officially committed to my serious “hay bale gardens” project…and giddy with excitement as a result!

(My kids were also pretty excited about their new movable playground equipment! LoL)

Although most people seem to recommend straw over hay (I think largely due to the potential for weed seeds in the latter), I chose hay partially due to availability, and partially since it will likely offer more “food” value for the worms, and thus ultimately more nutritional value for the plants.

Me being me, I knew I couldn’t just set up some run-of-the-mill hay bale garden beds and call it a day, though. Nope…I had to come up with something better…much better!

As such, my first task was to clean out and excavate a couple of existing worm beds. The smaller of the two we’ll call the “railway tie bed” (RTB). The other one was a much larger windrow. As you can see (in two previous images), both beds were looking a little sad once all the snow had melted away this spring. Needless to say, the overhaul was definitely overdue!

The first thing I did was rake off all the loose debris (mostly dead plant remains from last gardening season) plus the old grass clippings I layered on last fall. These materials, along with the bulky upper layers of compost were used to create a windrow in another (hardly used) garden. 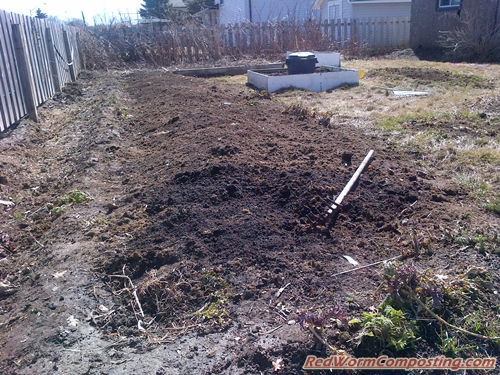 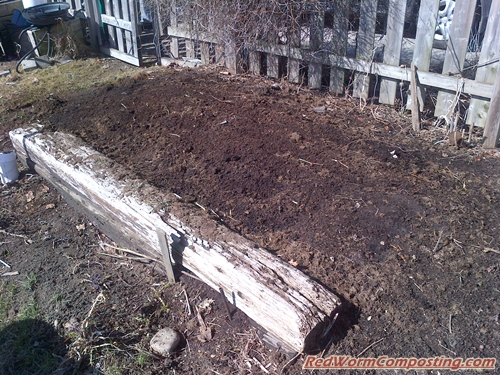 Next, it was time to harvest the usable vermicompost from the beds. On first glance it didn’t really look like all that much, but as I discovered there was actually a huge volume of beautiful, rich material down below.

I screened a lot of it, and dumped many full-wheelbarrows-worth on various other gardens.
(I also learned that a snow shovel can actually work really well as a vermicompost scoop! lol) 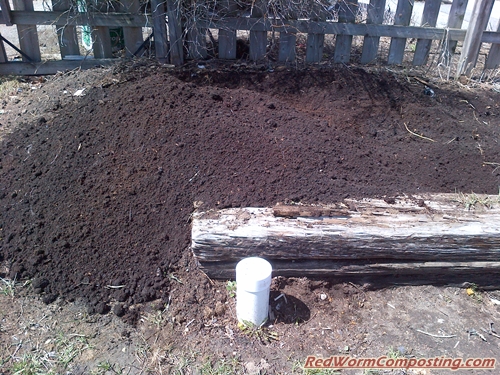 Once I started hitting the clay soil below, I switched into excavation mode in an effort to speed up the process.

(Keep in mind, all of this had been happening gradually over the course of quite a few weeks) 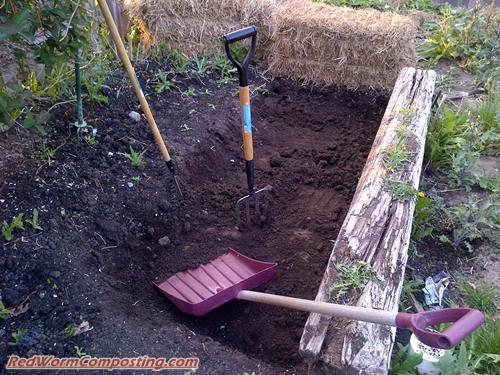 The one downside of “going big” with projects like this (at least when I’m involved – lol) is that everything invariably ends up delayed. In a “perfect world”, I would have had the beds (and bales) completely ready to go in time for the traditional yearly planting weekend (Victorial Day Long Weekend, towards the end of May up here in Southern Ontario). The one thing that has eased my guilty conscience is the fact that temperatures have remained fairly cool, with frost warnings being issued as recently as last week.

Nevertheless, I knew it was critical to at least get the ball rolling with my bales this week (even with the worm beds unfinished) – since they require a “composting” period before I can even plant in them. Yesterday, I decided it was time to whip up some sort of nutrient-rich “tea” with which to prime my bales. Straw bale gardening advocate, Joel Karsten, recommends using water soluble inorganic fertilizer. Just the fact that worms are involved here eliminates that option (not to mention the fact that I’m trying to keep this as “natural” as possible).

I’ve been a bit stumped re: what I could use instead. I don’t know of a water-soluble, worm-friendly organic fertilizer – and my guess is it would be very expensive even if it did exist.

I recently found inexpensive “soy milk powder” (53% protein by weight) at a bulk goods store, and was very excited since it seemed like a good possibility. But when I shared this with Worm Farming Alliance members, and received multiple replies about GMOs, pesticides, and basically, the potential for soy to ruin the world as we know it (lol), I realized it might not have been the best choice after all.

Another (more eco-conscious) idea I had was to create some sort of “tea” using comfrey – a plant that essentially grows like a weed in my yard now. As I’ve written previously, comfrey is a well-known “dynamic accumulator” (aka “nutrient miner”) plant. Apart from the obvious nitrogen in those rich green leaves, the plant is reported to accumulate other important nutrients such as potassium, phosphorus, and calcium (among others) as well. In that “perfect world” I mentioned earlier, I would have a giant industrial blender I could use to turn all my comfrey into gallons of beautiful green soup, but alas, the only option I have (that won’t land me in the doghouse) is a very small “Magic Bullet” knock-off. lol …which, once blended (with added water), left me with less than a gallon of comfrey concentrate. This I poured into a plastic garbage can full of water. 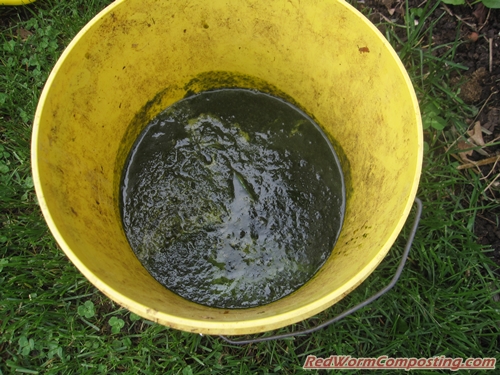 Just for (weird) kicks and giggles, I also blended up some rabbit pellets mixed with water and added this to my make-shift cauldron, along with a modest amount of the soy milk powder (while I won’t likely buy it again, I’m certainly not going to let it go to waste), some rock dust, and one or two other secret ingredients, before mixing up the brew really well.

I’m not going to claim I ended up with the ultimate worm-friendly liquid fertilizer for my bales – but I figured it was probably good enough to at least get the ball rolling (especially since the hay itself will have additional nitrogen etc, as touched on). Next, I poured 1 watering-can-full of the concoction on each of 13 bales (as many as I could before I ran out). Hindsight is of course 20/20, but I was kicking myself when I realized afterwards that I should have inoculated the bales with beneficial microbes at the same time.

I ended up going back and depositing a small amount of coarse vermicompost (some still had worms in it) on top of the same bales, and then lightly sprinkled again with regular water. We had some rain showers overnight, so that will help as well.

As you can see below, the railway tie bed is getting close to completion (at least as far as the excavation, straw-bale-placement process goes)… …while the bigger bed still needs a lot of work! Since the bales will operate as self-contained gardens, I don’t feel quite as rushed to get the actual worm beds totally finished (a process that will likely happen gradually over the next month or two), but I do feel some pressure to at least get the larger bed lined with “primed” bales. Hoping to have that job done by the end of the week.

Needless to say, there will be plenty more updates to come – and this is certainly a topic we’ll be looking at in even more detail during the upcoming (and unfortunately delayed, as I type this) Vermigardening Series!