It’s been about a week since I set up my new outdoor Worm Inn Mega, and so far things seem to be coming along very nicely!

I didn’t give the worms much time to “chill out” before starting to add food though.

Last weekend, I noticed we had an old spaghetti squash that was starting to go bad (these things last forever – it has literally been sitting in my kitchen since it was harvested from my garden last fall), so I decided to split it in half and add it to the system.

I simply placed the squash halves on top of the upper layer of thatch and grass clippings, then covered up with more loose hay. 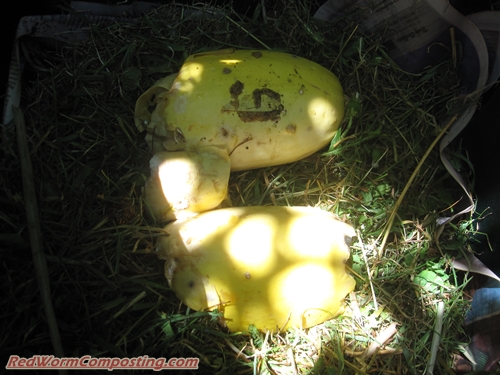 Not one to go easy on my Worm Inn systems, yesterday I decided to add a “real” batch of food!

I mixed two bags of frozen-then-thawed food waste with quite a bit of leftover thatch I happened to have on hand (collected for my thatch experiment). I didn’t bother with chopping everything up really well. I also didn’t bother to weigh the mix – but I’d estimate it was about 10 lb of material. 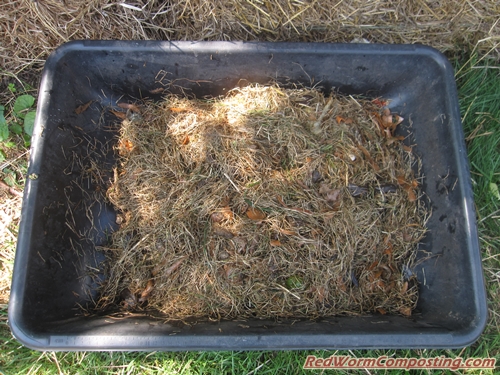 As I’ve written numerous times before, I’d never be so bold with a plastic enclosed bin – especially not one with only a starter worm population. But in this case – partially influenced by the Mega’s outdoor location – I am not worried in the slightest!

I DID however add a layer of shredded cardboard before dumping in the food mix. It’s still important to balance rich foods with absorbent bedding materials, especially early on when liquid is more likely to drain out from the bottom. 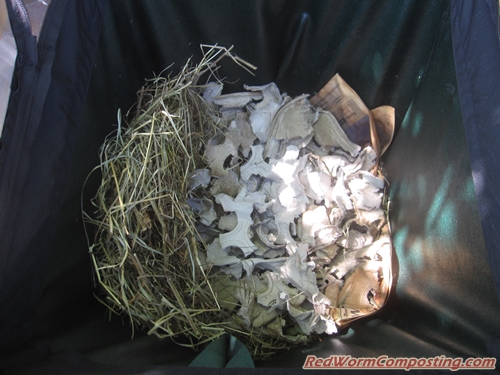 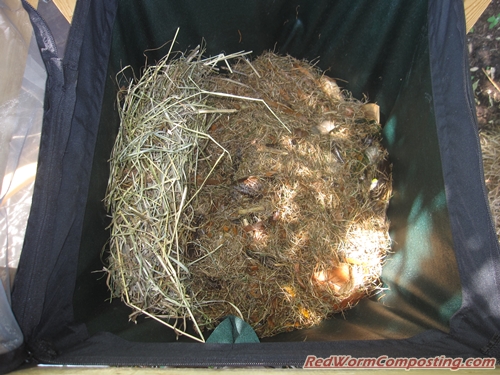 (NOTE: The hay you see pushed to the side in the two previous images was simply pulled back over top once I had added the food)

I checked up on the system this morning and wasn’t surprised to find the food/thatch layer quite warm to the touch, and the worms remaining (for now) down below the cardboard layer. I’m sure they’ll be into it by early next week.

The forecast is calling for a huge dump of rain tomorrow, so that should make things interesting. I’m going to see if I can find something bigger than the concrete mixing tub to use as a cover.