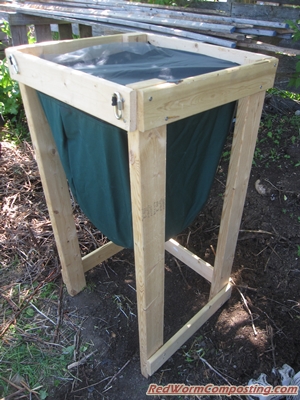 Time sure flies when you’re having fun! Looking back, I just realized that my last Worm Inn Mega blog post wasn’t that long after Halloween (and actually discusses the results of a pumpkin vermicomposting experiment)!

As I (think I) touched on in a later blog post about getting a regular Worm Inn set up on a wooden stand, unfortunately I had to dismantle the Mega I had down in my basement bathroom due to some renovations and an overall attempt to free up some space late last fall.

I’ve definitely been missing that system, though! So much so that I finally decided to do something I never thought I would do – I set up a Worm Inn Mega outside in my backyard!

If you’ve been through the RWC Worm Inn Guide, or any of my other blog posts etc on the topic (of Worm Inns as a whole), you’ll probably know that I tend to refer to them as “the ultimate indoor vermicomposting systems” – and basically go so far as to recommend that people NOT keep them outdoors.

Even though I’ve received some positive feedback from customers who have done exactly that, I’ve continued to have misgivings about it. Here are a handful of the reasons for my stance on the matter:

Nevertheless, I’ve decided to do my best to make it work in my yard this summer!

In all honesty, I actually have pretty favorable conditions compared to some. Our summers are quite reasonable – it’s pretty rare for us to have heat waves with temps as high as 90 F. I’ve also positioned the system in what is likely the shadiest/coolest part of my yard. I will also be keeping some sort of cover over top most of the time (more on that in a minute).

Ok, let’s now look at how I set the system up!

First things first, I started by tying my typical “hillbilly hitch” (you’ll have to read the guide to learn about the origin of the name – lol). As always, let me point out that this is NOT critically important – it’s just a preference of mine, to help make the bottom opening a bit more constricted. 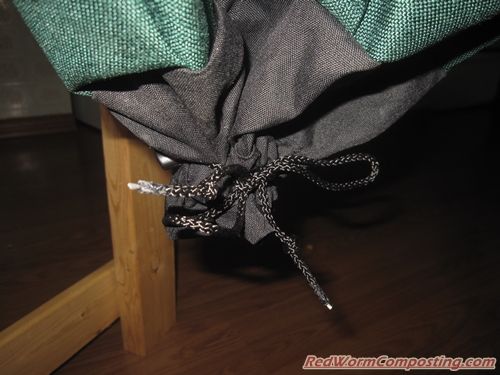 I then created my “false bottom” by laying in some layers of newsprint (folded up the sides), with some shredded corrugated cardboard, and even a layer of hay (something I happen to have a LOT of at the moment, as you’ll soon learn!) just for the fun of it. All of this was lightly moistened. 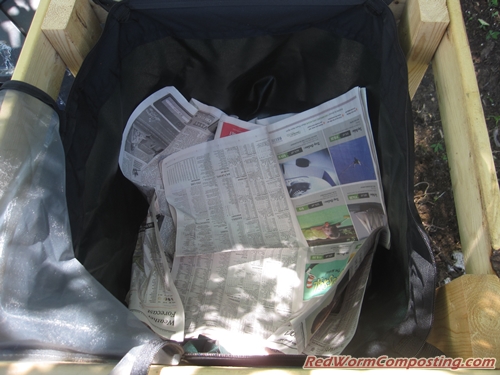 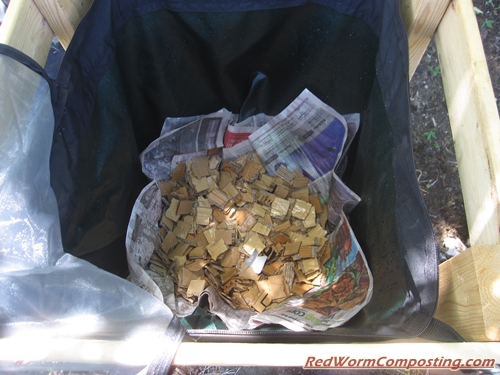 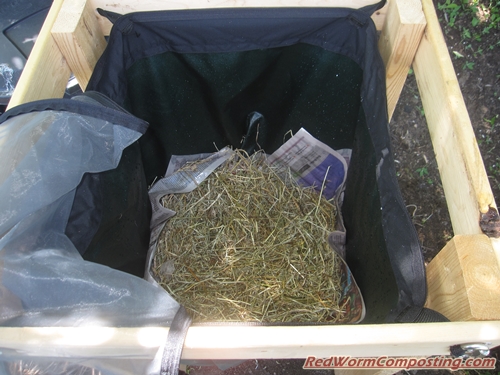 I pulled another trademark “Bentley move” by stocking the system with a fairly limited amount of worm-rich “living material” (more specifically, it was one bag of the “Easy Worm Mix” I sell up here in Canada). I am a big proponent of letting a worm population grow into a given system – plus it’s always fun to see how well the Mega can do, even with a relatively small population of Red Worms in it (early on that is – rest assured there will be loads and loads before too long). 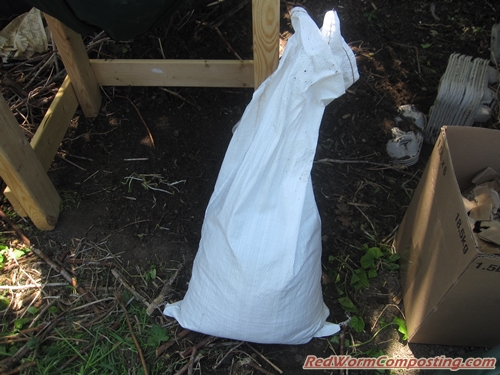 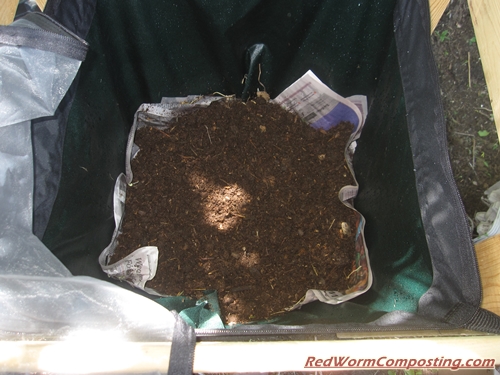 In light of my recent success with using grass thatch in worm bins, I decided to collect a new batch of it and use that as my initial cover layer. As you can see, I actually got a fair amount of green grass in the process – but since this is the top layer, and since this is the (incredibly breathable) Worm Inn Mega we are talking about here, there is absolutely nothing to worry about!

(In case you’re wondering what I mean…let me offer the reminder that you need to be careful with green materials such as grass clippings in enclosed plastic worm bins since they can release ammonia gas – deadly toxic to worms – during the decomposition process). 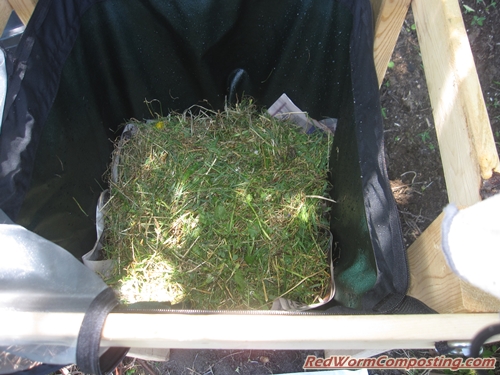 For my first “cover” I am simply using on of my shallow “concrete mixing tubs” flipped upside down on top of the wooden stand. I do want to see if I can find something larger so as to provide even more rain and sun protection. I was eyeing my old (rarely used) VB48 lid earlier – and may in fact sacrifice it (would need to be trimmed down a bit) for “the cause”! 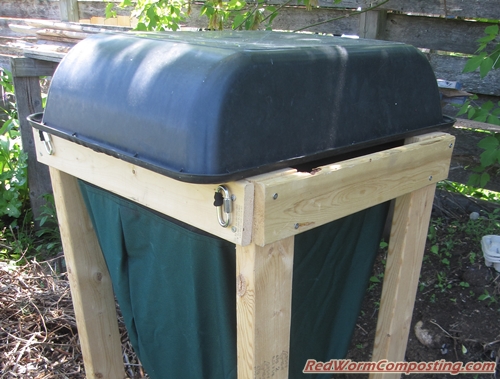 As for “food” – while the worms could easily sustain themselves for quite some time solely by munching on the aged manure they are living in (not to mention the false bottom materials), I do actually have some bags of frozen food waste thawing out as I type this. I’ll more than likely mix in some of that (with some more moistened bedding) this weekend.

It feels good to be back in the saddle with a Worm Inn Mega system again. Can’t wait to see how things turn out over the next few months.