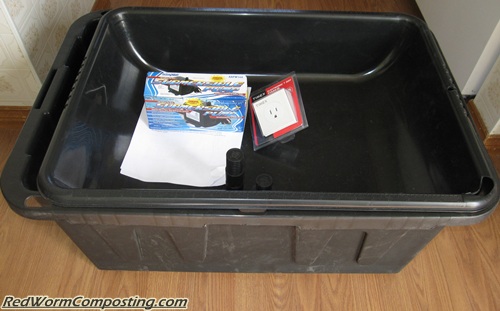 Early last week I received a VERY cool “present” in the mail in the form of a small-scale flood and drain hydroponics system. Someone (who had been following my earlier vermiponics series) is quite keen to have me test it out for them, and potentially sell these units from my website at some point. While I’m always open to new revenue-generation ideas for the site (since these allow me to devote more time to the project), I also really want to be familiar with the things I’m selling so that I can be sure my customers are receiving really good value. Given the fact that I’ve been trying to come up with a ideas for how to build my first outdoor vermiponics test system, the timing of all this has worked out very well! I am definitely NOT a talented DIY person, so the less building I need to do the better! haha

As such, I’ve decided to put all my focus on testing out this particular system to see how it performs out on my deck. As I mentioned, it’s what I would consider “small-scale” for an outdoor system, but it IS a lot bigger than the mini-test system I set up in my basement a couple of months ago. The grow bed itself is exactly the same size as previous reservoir (employs the same type of plastic tray), while the reservoir this time around is 27 gallons – so I think this will provide a nice step up from my first system, while remaining small enough for me to manage easily.

We’ve had a warm spring thus far, but we’re still a number of weeks off from the standard yearly start of gardening season (i.e. the generally accepted date when you no longer need to worry about frost damage), so it may be a little while before I get things seriously rolling. In the meantime, I do plan to get the system set up, stock the bed with worms, and get some seedlings started indoors, so everything is ready to roll for the end of May. I am hoping to pay a visit to a hydroponics store this week to get some additional supplies (gravel etc), so I should have an update fairly soon.

In general, you should expect to hear a lot more from me on the vermiponics front this year. I’ve been in close contact with Jim Joyner (who I wrote about in my first vermiponics article), and it sounds like he is gearing up to test out a new system this season and quite keen to keep the channels of communication open about all this.

Red Worms in the News!