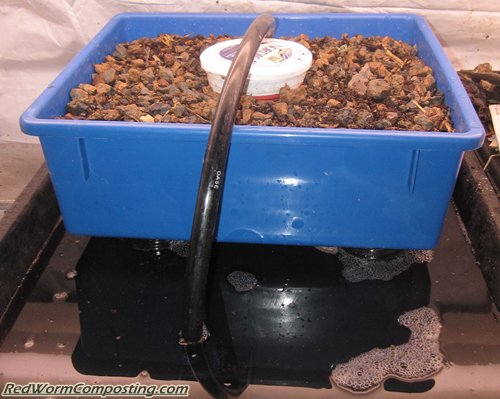 It may not be pretty – but let’s see what this system can do!

Earlier in the week I wrote a post about “vermiponics“, and mentioned that I would be setting up my own little system. Well, I’m happy to report that said system is officially up and running. It doesn’t have any worms in it yet – I want to let the water flow through it for at least a few days before adding them (kinda like aging a worm bin before stocking it with worms).

It probably didn’t hurt that I used to be a hydroponics hobbyist, and had also acquired some additional equipment with the intentions of setting up a small aquaponics system. As a result, I didn’t end up having to buy anything for this particular system (not that it’s particularly complex).

Here is a basic run-down of the equipment/material I used for my mini vermiponics system:

I should mention that I am basically flying by the seat of my pants here, so please don’t assume that there is any expertise behind this set up! I wanted the bed to have both organic and inorganic materials (hence the addition of the shredded cardboard and dryer lint) – in all honesty, I actually think this will end up being a great use for the lint! Aside from not liking the idea of leaving the worms to crawl around in a bed of jagged rocks, I think the absorbent materials will definitely assist with moisture distribution and retention (the former being more important given the fact that the water will be circulating constantly). 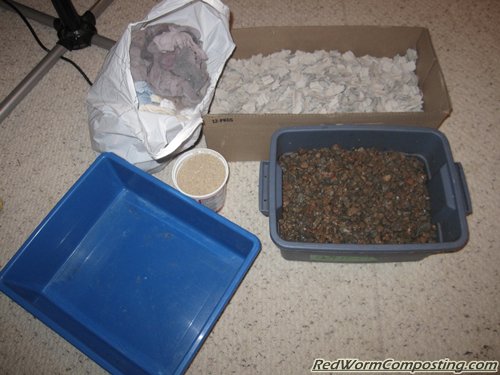 Some of the supplies used to create my vermiponics system

I had originally planned to simply drill quite a few (regular 1/8″ or 1/4″) holes in the bottom of the tray, but I think the vents are a nice alternative. Not only does it take less time to drill two vent holes (assuming you have a hole-cutting bit), but since the vents have a wall that extends a distance up into bed this should help to trap some materials down in the bottom (for further processing) that might have otherwise simply drained out of the holes. 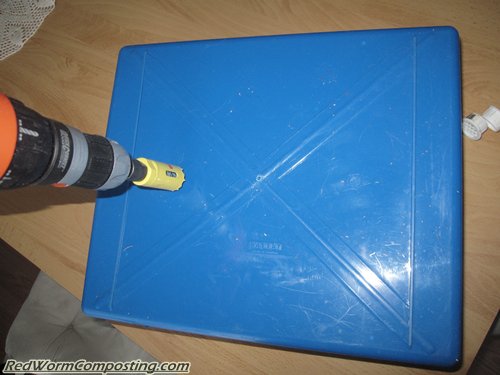 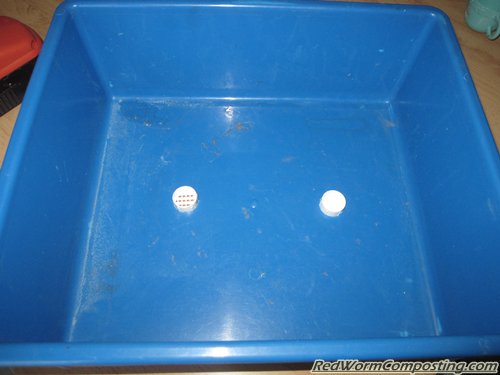 Vents pointing inwards for water retention in bottom of the system

I decided to go with gravel for my bottom layer in the bed. I thought that it might be better for trapping materials that make their way to the bottom (smaller gravel bits, food etc). I basically added enough to bring the level up to the top of the vent walls. 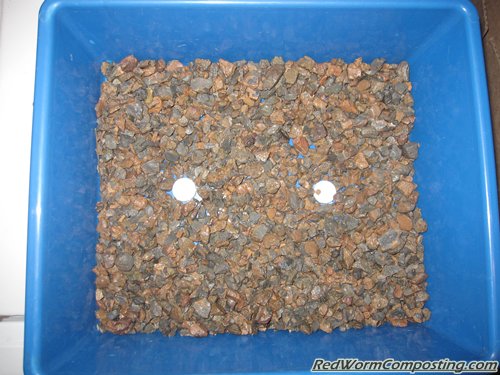 Started with a layer of grow bed gravel at bottom

The next layer consisted of a lot of dryer lint. I made sure to pull it apart as much as possible so that the worms will have any easier time navigating through it (and just to generally improve surface area). 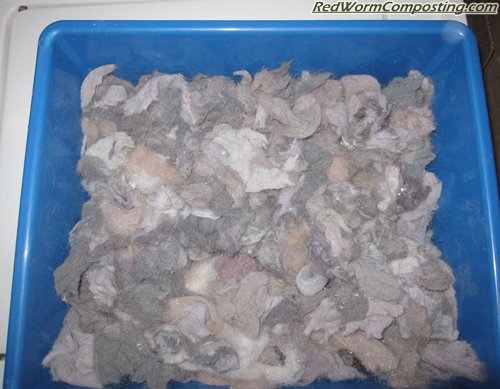 Before I went any further with my layering, I decided to clear an area in the middle for my “feed tube”. This will (hopefully) make it easier to feed the worms, since I won’t need to try and bury it in among the plants. In a sense this will be like a mini “worm tower“. I created the tube simply by drilling some holes (again, using the 1” hole-cutting bit) into the sides and bottom of a yogurt container. I am going to experiment with using a removable burlap sac as the actual food holder though. This way the tube can always remain in the bed, but I can still remove the feeding zone to clean it out or just generally see what’s going on inside (maybe do worm counts etc).

Holey yogurt containers, Batman! This will serve as my feeding tube.

I also decided to see what would happen to shredded cardboard in a bed like this. Obviously it will break down over time (and more quickly that the lint), but I think it might provide some good additional food/habitat value for the worms as well. 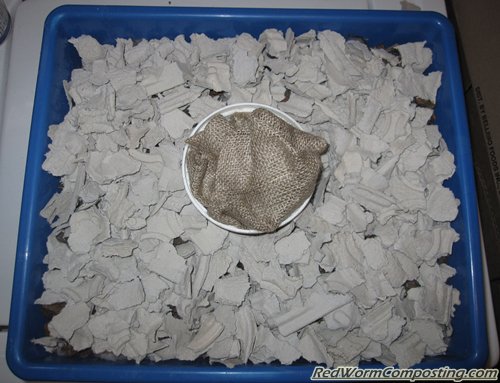 Some shredded cardboard, just for the fun of it!

I then topped everything off with a final layer of gravel. This should help to secure all the light materials down below, and will give it more of a grow-bed look! (haha) 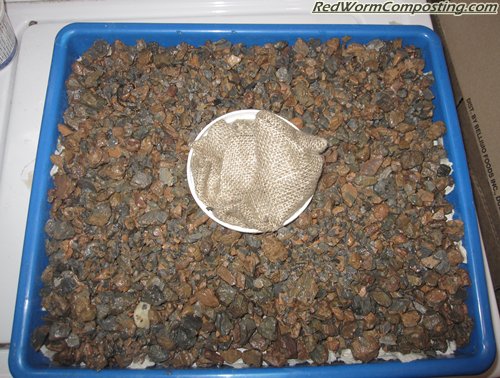 Topped everything with another layer of gravel

As mentioned earlier, I used four mason jars (water-filled) as support legs for the bed. Again – no real rationale here other than the fact that I happened to have four of them available, and no other prospects for solid supports! 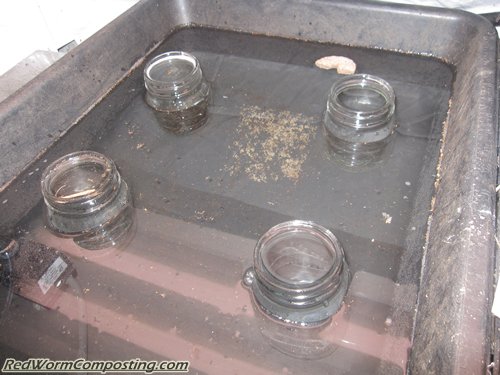 Filled some mason jars with water and used as supports

I should mention that before I actually put the bed up on the supports, I made sure to run some tap water through it for a few minutes. I wanted to make sure everything was nice and wet, but also wanted to ensure that any worm-unfriendly chemicals – if present (in lint, on gravel etc) – would get flushed out as well.

Once everything was up and running (with pump on etc), I decided to add some compost ecosystem material on top. This should help to inoculate the system with beneficial microbes. I also sprinkled some poultry feed over the top as well (making sure to wet it down) so there would be some food for the worms when they are added. 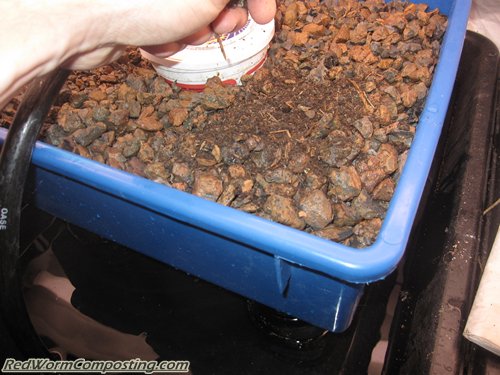 Added some compost ecosystem material to liven things up a bit

I’m still not sure what plants to grow. I was thinking that lettuce would be a good choice, given the fact that it’s fairly cool in the basement (I’d love to grow basil, but it might take too long to germinate). I was also toying with the idea of trying something super-easy like chia seeds, just for the sake of being able to see how the system performs fairly quickly.

One other thing to mention – I also placed a piece of mosquito dunk in my reservoir. I seem to have some fungus gnats these days, and am hopeful this will keep them from getting out of hand in the grow bed!

Anyway – I am certainly looking forward to getting things rolling with this system soon (seeding, adding worms etc), and will of course keep everyone posted!
😎