Since the time of my last seed ball post, I have continued to experiment with my own mixes. Most recently – this past weekend – I decided to create a mix solely consisting of 50% vermicompost and 50% paper pulp to see what sort of a difference it would make (if any) to leave the clay out. I had recently received various bags of seeds for growing “microgreens” (another topic I’ll certainly be writing more about here fairly soon), so I thought it might be fun to create little microgreens seed balls – I chose “Red Russian” Kale seeds for this particular experiment.

The idea of having the seeds ready to go inside the growing medium just seemed to “make sense” to me, so I mixed about 15 g of the kale seeds into the vermicompost/paper pulp matrix before creating the seed balls. Then, I spent a ridiculously-long time creating literally 100’s of little kale seed balls (I wanted to make sure I used up the entire batch of seed ball matrix). Most of them were placed in front of heating fan to dry.

I thought I was being “smart” by making the seed balls really small and using warm air to dry them. But alas, I failed to take into consideration the fact that some seeds just germinate REALLY quickly! 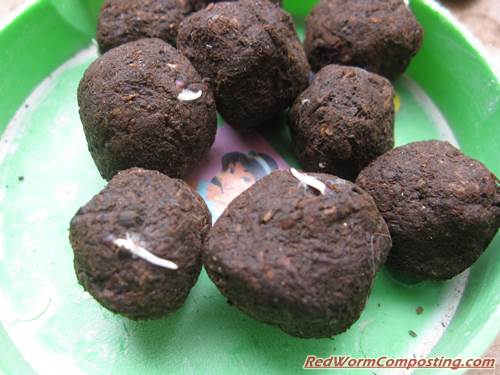 So yeah, the long and the short of it is that while I did manage to dry out quite a few of the seed balls quickly enough (at least I think so), others started sprouting during the drying process! Looks like I’ll be eating lots of kale microgreens pretty soon!
😆

I also wanted to point out that while the vermicompost and paper pulp mix seemed to work very well without the clay as far as creating the seed balls went, what I found was that they lost a lot of their smooth shape as they dried. I don’t know that this is necessarily a “bad” thing – I just thought it was interesting. 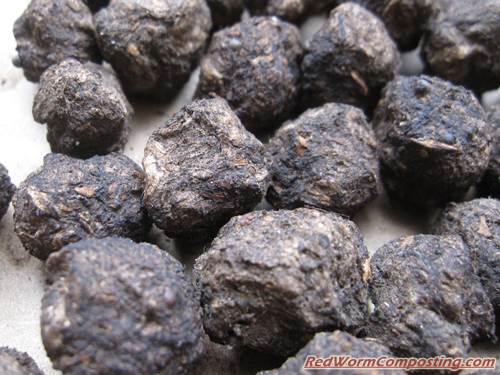 I haven’t given up on the idea of embedding the seeds in a growing matrix, but I think it’s safe to say that I won’t be making seed balls the next time I do this. Creating thin disks (or some other shape) and drying them out really quickly will likely save a lot of time while also (hopefully) avoiding the early-sprouting issues.

Stay tuned for more updates from this continuing saga!
😎