Yesterday I decided it was time to shoot another Worm Inn Mega video. Let me apologize in advance for the length of it and the shaky filming. In hindsight, it probably would have made more sense just to take pictures and then create a slideshow video instead.

Anyway, apart from talking about how the system is coming along (among other things), my aim was to perform my first harvest of vermicompost. I’ve been really curious to see how the material in the bottom of the system is looking. It’s been months since I first set it up, and the level of material has kinda been getting up close to the top! (lol)

OK – so I’ve been feeling a wee bit impatient! As touched on in the video, I really wasn’t super concerned about potentially finding worms in the material (which I did).

One important topic I covered was the (small amount of) mold growth on the lower outside walls of the system. I definitely wanted to bring this up since this is something that’s been discussed here before (see comments section of “Worm Inn Mega vs VermBin24“). This can happen from time to time if you are adding lots of food and/or water (I am adding a fair amount of both), and the surrounding environment has a fairly high level of humidity (especially if low air flow). The fact that my system is sitting in the corner of a room in my basement certainly doesn’t help.

As touched on, if you see growth like this, getting rid it should be very easy with a damp rag (maybe a bit of vinegar for good measure). Definitely don’t use any harsh chemicals!

After I wrapped up the video I continued to remove material from the bottom of the Mega, and ended up with a mixing tray full of rich (but pretty coarse) vermicompost. It was quite moist, but had a really nice earthy smell to it. I will likely leave it to sit in the tray to dry out for a little while before starting to screen (as I’ve been doing with the VB48 vermicompost). 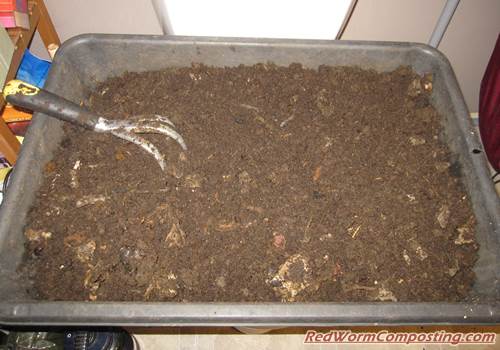 I plan to do at least one more major harvest before leaving the system alone (as far as harvesting goes) for a while. As mentioned in the video, I would like to switch over to a wooden stand for my Mega, and obviously it’s going to make sense to get the weight as low as possible before attempting to do so.

On that note, I am happy to announce that Blake Ketchum (who will be a two-Mega owner very soon) kindly offered to provide some plans for the nice (yet easy-to-build) wooden stand she built for her first system. This resource will be made available for all RWC Worm Inn Mega owners soon.