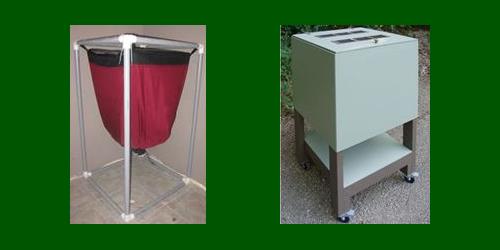 In the comments section of my last Worm Inn Mega update, someone asked about the difference between a Mega and a VermBin. I thought it would make for a fun blog post, so here I am!
🙂

It’s no secret that I love both of these types of bins. And…yes, of course I am super-biased (lol). After all, I do sell both of them (well, the plans in the case of the VermBins) – but it’s very important for everyone to realize that I only sell/promote them because I LOVE them and stand behind them 100%! You’ll notice that I don’t sell any other bins on the site (nuff said).

Anyway, in this case, I think the bias kinda cancels itself out – lol – so we are good to go!

Both of these are “single-compartment flow-through” bins. In other words, there is one main vermicomposting zone – wastes get added up top, and vermicompost get’s removed from the bottom (NOTE: you can certainly have horizontal flow-through bins as well – but generally they will require one or more additional compartments).

In theory, the worms should follow the food materials and concentrate themselves up near the top of the system, leaving castings-rich vermicompost down below. In actuality there are always going to be at least some stragglers hanging out in the material that gets harvested. But, all in all, when these systems are maintained properly you should see a pretty good separation of worm from vermicompost.

Both of these bins offer excellent air flow, and as such they can produce really high quality vermicompost – usually faster than in something like a plastic, enclosed bin. They also both help to promote very healthy living conditions for the worms.

1) DIY vs Manufactured – VermBins need to be built – whether by you or someone else – so that naturally adds a bit more challenge/hassle. But also adds a bit more flexibility. While you are encouraged to stick to the plans – especially if you are a DIY novice – there are plenty of ways you can “tweak” the design (or completely modify it, if you are good with tools) to suit your needs.

Worm Inns are basically ready to go. The only thing you need to “build” is the stand. If building the PVC pipe stand (all Worm Inns come with corner pieces and zip ties for this – you just need to buy the pipe) – other than cutting the pipes, there’s really nothing to it. It’s just like putting together “Tinker Toys”. Building a wooden or metal stand will obviously be more involved, but still easier than building a VermBin.

2) Weight – The Worm Inn itself is incredibly lightweight – made from durable cordura fabric. VermBins, being made of wood (with various metal components) have the potential to weigh a LOT more. In some ways the VB24 will have the edge, however, since it is a very solid, rigid design – you can hit it pretty hard and you don’t have to worry about anything crashing down. As I touched on in my recent Worm Inn Mega video, as solid as the PVC stand is (zero issues handling the weight of the system), there is some potential for trouble if you happen to bump into it really hard. It’s also important to point out that one of the optional add-ons for the VermBins is a set of wheels – so that gives the VermBins an edge for moving the system.

3) Critters – The Worm Inns definitely win in this category hands-down! Fantastic aeration (and potentially light, if sitting in well-lit location) up above keeps organisms down in the composting zone. The zippered mesh lid is pure genius – helping to keep flying critters OUT (or those that have hatched IN). VermBins tend to be better than enclosed plastic bins in terms of encouraging the development of beneficial critters – but they don’t do much to keep the ones that fly in or out!

4) Size/Volume – I did a rough calculation of the volume of a Worm Inn Mega based on its measurements and came up with approx. 4 cu ft. I’ve previously calculated the internal volume of the VB24 as ~5.6 cu ft, so it’s definitely a decent amount bigger. But it also takes up more room. It is 24″x 24″ x 42″ (without wheels) – whereas the Mega stand is 20″ x 20″ x 36″. I should also mention that the extra volume (and solid wall construction etc) means the VB24 is a lot more likely to overheat. I can’t think of a single time I’ve had a Worm Inn overheat – not saying it’s not possible (especially in the case of the Mega, and also in cases where the system is sitting in a warm location), but definitely a different kettle of fish than the VermBins (as you might imagine, the VB48 and VB96 are even more likely to heat up).

5) Pricing – The suggested retail price of the Mega is about $135 or so*. The cost of brand new supplies for the VB24 might be in the range of $100-$150, depending on where you live and how good you are at finding deals. Of course, you can build it for a lot less than that if you improvise a bit and/or use reclaimed materials.

*One VERY important thing to keep in mind about the pricing of both Worm Inn models (and something I always forget to mention) is the fact that they are manufactured in the USA. Jerry Gach has a team of very hard-working, awesome folks who really benefit from his employment. He could VERY easily outsource the work overseas and pay a fraction of what he pays per unit, but he has chosen to go this route instead. I have nothing against products made outside of North American, don’t get me wrong – but I still think this is commendable. If you have ever felt that these bins are “expensive”, perhaps this will provide some perspective.

6) Harvesting – I think both bins have harvesting pros/cons/hassles, so it is tough to pick a clear winner here. I love the fact that the Worm Inn (Mega or otherwise) has a tightly enclosed bottom. One of the challenges with the VermBins is that once your false bottom rots away, it is not uncommon to end up with a fair amount of vermicompost (maybe even worms) falling down. This is why I came up with a “skirt” and catch-bin system for my VB48, which has been working very well I might add. On the other hand, the fact that the bottom of the VermBins can be accessed quickly and easily almost makes the Worm Inn harvesting look like a bit of a “hassle” in comparison. So it’s all about deciding what works best for you! All in all, both types of systems will allow you to harvest some really nice material from the bottom (and no, the rest of the material won’t just come crashing down when you do so! lol) – and do so relatively easily once it is ready.

7) Worm Production – This one is tough to assess – and I have been extremely impressed with both types of system for supporting high densities of composting worms. I am still in the “early” testing stages with the Worm Inn Mega (as I type this) – but I have a sneaking suspicion (based on the gobs upon gobs of worms I am already finding in there) that it may reign supreme in terms of density of worms per unit volume. We’ll have to wait and see!

UPDATE: After working with a Mega for an extended period, I’d say that it has the potential for greater worm densities (per unit volume)! Pretty amazing how many worms you can end up with in this system!

OK – so that’s MY take on it! What do all of you Worm Inn and VermBin users have to say about it (especially those of you who have tried out BOTH)?

Speaking of trying both (wink, wink)…