Not that September is much better!
😆

As you might guess (me being me), my beautiful “beast” has mostly been neglected during the past 4 or 5 months. Since the “reboot” (discussed in the September post), I really haven’t added all that much in the way of “food”, especially not since starting up the Worm Inn Mega (remember, I’ve been hoarding all my food scraps for that system).

Have all my worms died of starvation? Absolutely NOT!

This is one of the big reasons I am such a “bedding, bedding, bedding!” advocate. A system with loads and loads of bedding (especially bedding made from paper products) – all other worm survival requirements being met – can sustain a worm population for months and months…and months! The main VB48 and both of the “catch bins” sitting down below are now loaded with nice looking vermicompost, and loads and loads of small composting worms.

If you are a small-scale entrepreneurial vermicomposter like me (or are thinking about becoming one), and you found the recent podcasts and report interesting, pay careful attention to what I am about to tell you. Low-nutrition vermicomposting systems like this can offer you a fantastic way to produce “worm culture” (discussed in the podcasts/report) – and without a lot of the hassles of a heavily-fed system (eg. bugs, anaerobic conditions, excess nitrogen etc etc). You get loads and loads of smaller worms – would be an exercise in futility if you had your heart set on producing “pounds” of them – but the vermicomposting potential is still there. Add this stuff to a new worm bin and watch what happens!
🙂

Review this post if you need more convincing: Will a Red Worm Population Double in 3 Months?

Just for kicks and giggles, I dug a small amount of material from one of the catch bins and put it in a small bucket (maybe 1 gal in size) – filling it about half way. I put the bucket under a bright light and started scraping away the vermicompost. While I was certainly expecting to see lots of small worms – what really surprised me was the fact that I found an incredible number of worms in the “hatchling” size range (you can see some larger examples on the quarter in the picture below). Apparently the worms are still breeding and producing offspring – which is pretty cool if you ask me! 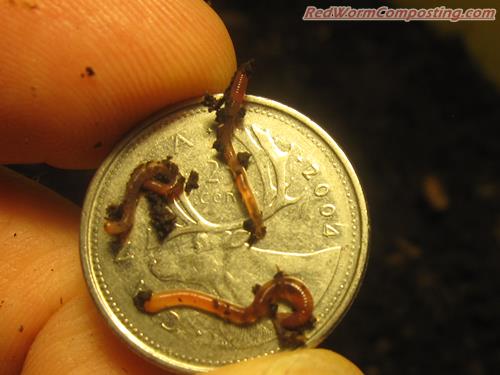 I did the light harvesting pretty quickly, and didn’t worry too much about ending up with plenty of tiny worms in the scraped material (which I did) – I added this stuff to my Worm Inn Mega. At the bottom of the bucket I ended up with a nice concentration of worms. Even the image below (which shows plenty of worms) is misleading, since there were so many teeny tiny worms in there as well. I have every confidence that had I decided to add only the contents of that bucket – i.e. the total amount of wormy material that was removed from the catch bin – to a brand new small-to-medium-sized worm bin, I would have ended up with a thriving population (of bigger worms) in a fairly short period of time! Might have been a fun experiment, actually – but I have something else in mind (more on that in a minute). 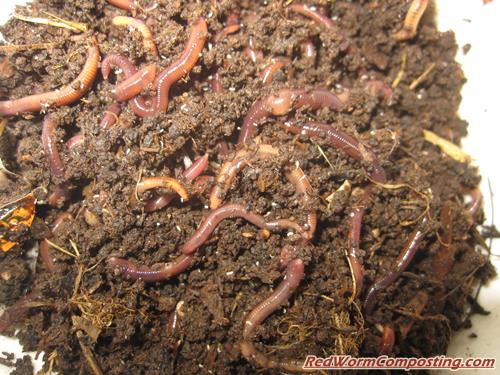 Getting back to the “Beast”…

It’s pretty clear that the system is going to need a pretty major clean out this spring. Obviously it’s not going to make much sense to get it going again as an active vermicomposting system while it contains so much vermicompost.

In light of my recent entrepreneurial leanings (and the launch of the Worm Profits course), I’ve actually decided to make my VB48 clean-out project into a fun little business experiment (something I will likely provide an update on here, but will share in more detail with the WP group). Basically, I want to see how much money I can earn from the worms and vermicompost that are in there right now. If those few scoopfuls of material (removed today) contained that many worms, I can only imagine what the total number of worms in the entire system (and catch bins) might be!

What’s funny is the fact that a lot of the original false bottom in the VB48 is still intact. All of the corrugated cardboard (lowermost layer) is gone, but the inner newsprint layers still covers most of the bottom – and there seems to be a decent number of worms living in that zone alone! Again, had my main focus been on producing vermicompost as quickly as possible with this system, I likely wouldn’t have made the false bottom nearly as thick as I did.

One other thing worth mentioning – while I haven’t bothered too much with the VB48 lid since my “reboot”, I have been keeping some garbage bags over top of the composting zone. This has been an awesome way to keep things moist near the surface and thereby speed up the breakdown of all the bedding materials I kept adding. 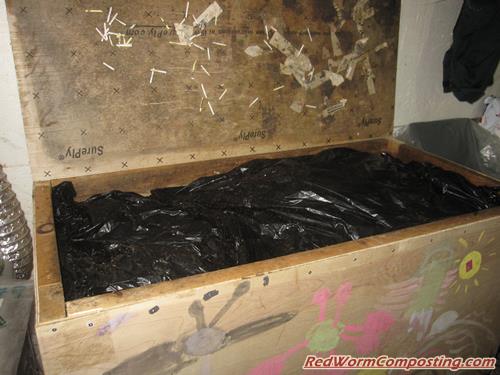 That’s basically all for now. I will definitely provide an update with more details about my VB48 clean-out project once it is underway.
Stay tuned!
😎