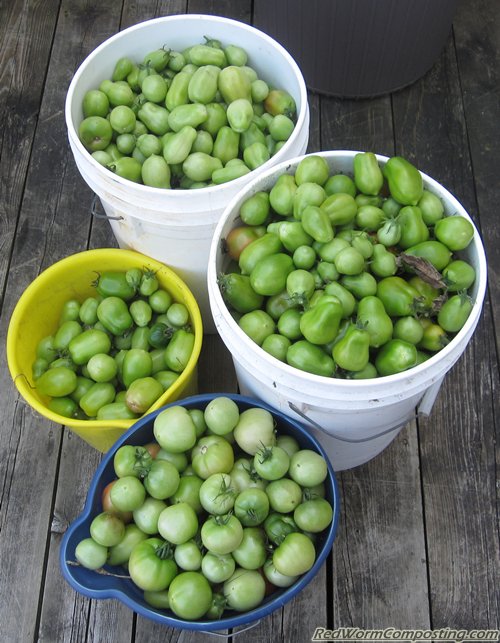 As I mentioned in my last vermicomposting trench update, this growing season I ran into some pretty serious issues with my tomatoes. I suspected that it was primarily due to my spacing (or lack thereof), but it seems that this has been a bad year for tomatoes in general in my region so that may help to explain why things turned out as badly as they did.

Originally, I had planned to simply let the tomatoes do their thing without my assistance and see if I’d end up with any sort of harvest. Although most of the plants were slumped over and looking pretty sickly in general, there were a LOT of nice looking green tomatoes, so I hoped that some sun and warmth would help them mature relatively quickly.

I started to realize however, that the tomatoes themselves were also becoming infected with the disease quite quickly, so I ended up making a hasty decision to simply salvage as many tomatoes as I could – regardless of their level of ripeness.

An thus, the ‘Great Green Tomato Rescue’ was born!
😆

I picked a warm afternoon when my dad and two year old daughter were both around to provide some assistance, and I basically started ripping out plants and putting any and all usable tomatoes into buckets (my daughter seemed especially fond of putting tomatoes in the bucket, only to then take them back out again).

When all was said and done, I had two 5 gallon pails plus two smaller buckets full of mostly green tomatoes. I also had a big heap of diseased tomato plants. Most seasoned gardeners would be horrified by what I did with those plants – since anyone with half a smidge of good sense would burn them. I, on the other hand, decided to lay them back over top of the trench and the old tomato bed they came from. I will be building up a bit of a worm composting windrow there this fall (partially in an effort to help insulate the worms over the winter) and figured the bulky plant material would be of benefit.

Obviously, this is not a good practice, since it means that the disease is basically guaranteed to stick around until next season. In other words, using that garden for tomatoes next year would be a really silly idea!
In all honesty I had planned to move my tomato bed to the other side of the yard anyway, and I am also confident that if I treat my plants properly (starting with normal spacing) next year, they should do just fine (Dumb optimism? We shall see! :-)). I will once again be using plenty of worm compost to help keep my plants healthy, and have also decided to get serious about worm tea brewing (and use), so I’ll have at least a few things in my favor!

I also have a sneaking suspicion that bombarding these diseased plants with all sorts of composting microbes (not the mention the Red Worms themselves) will greatly reduce the population of disease organisms by the time spring rolls around. 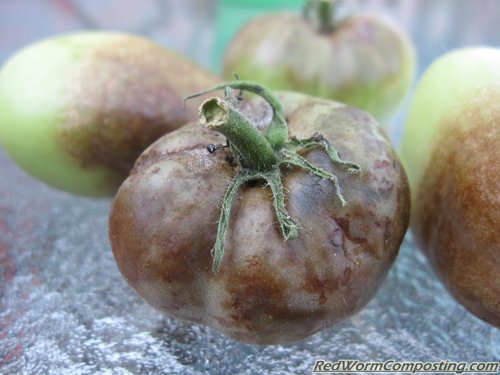 Despite the fact that I ended up with a pretty decent crop of tomatoes, it was obviously a tad disappointing that most of them were still green! Nevertheless, I decided to make every effort to NOT let them go to waste! I had been keeping quite a lot of space in our new freezer open for all the tomatoes I assumed I’d need to freeze, so BY GOLLY that space was still going to get filled! I have little doubt that I will indeed find plenty of uses for them once the cold weather hits and the taste of fresh garden produce is just a distant memory. They will be a tasty (and tangy) addition to soups, stews, sauces and omeletes for sure – and perhaps I will learn how to make some sort of green tomato salsa as well. Yum! 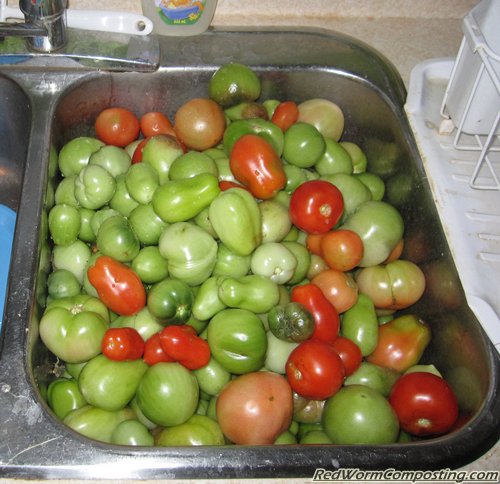 I’m not going to lie – there is a LOT of work involved in washing, chopping and bagging tomatoes for freezing. But in hindsight, I am glad I took the time to do it! What’s funny is that our freezer is basically jammed full (of garden produce) now, yet I was still left with a 5 gallon pail full of tomatoes! I can only imagine what would have happened if I’d actually ended up with a successful (non-diseased) crop. I guess I would have had to invest in a pressure cooker and some canning supplies as well!
😉

What’s kind of cool is that the last bucket of tomatoes, which has remained out in the sun on my deck, has continued to ripen and provide us with an ongoing supply of for cooking (eg. I made a big ol’ batch of veggie chili last week and put lots of them in it). I’ve had to remove a bunch that were developing the disease (and have fed them to my worms), but all in all I’ve been pleasantly surprised by how long they’ve lasted in general – I thought for sure that the last bucket would basically just end up as worm food!