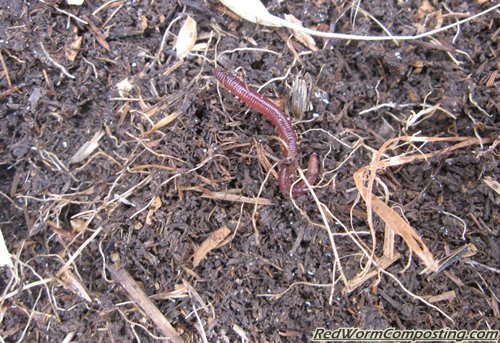 As I alluded to in posts (and comments) from earlier this week, I wanted to share some findings relating to my trench and vermi-mulch gardening systems from this season. There is no doubt that I have been hugely impressed with both of these methods – clearly (at least to me anyway), they both offer real value in terms of helping crop plants to thrive without the use of any (off-the-shelf) fertilizers.

All along I’ve also predicted that they would be a great way to raise composting worms concurrently (especially in the case of the vermicomposting trench). I’m certainly not here to tell you that that is now 100% not the case, but nevertheless there are still some important considerations to…uhh…consider! (haha)

While the main root zones of plants growing adjacent to these systems are actually growing in ‘regular’ soil, what I’ve discovered is that the plants still send out a VERY complex network of superficial roots into these worm composting zones. I would imagine that in the case of the trench systems, this root network is even more expansive, since the compost-rich zone extends quite a ways below ground level.

Not too surprisingly, what this means is that the plants are constantly sucking water and nutrients out of these areas. Last summer this certainly didn’t make any difference because I was constantly adding heaps and heaps of water-rich food waste (from the restaurant I had teamed up with), but this year – now that I am using mainly manure, and have not feeding nearly as often – I have really noticed the sort of impact the plants can have – especially during extended periods of dry weather!

Composting worms (even more so than some other earthworms) rely heavily on relatively high moisture contents to maintain a given ‘normal’ size. They are basically little bags of water, thus when moisture is much more scarce, they can shrink greatly in size. What I’ve been finding during my recent surveys of various trench and vermi-mulch habitat zones is that many of them seem to now be loaded with zillions of teeny tiny worms! The areas when there are still lots of normal looking worms (such as in my big wooden worm bin), are also those areas that have received more wet food waste (and/or water) – or at least areas that have been able to retain moisture more successfully.

The material in some of my trenches has now sunken well down below ground level – certainly makes me realize that setting up some sort of a ‘batch’ (adding everything all at once then letting it sit) trench at the beginning of the season might not work as well as I had predicted (this isn’t what I did myself – but I’ve always thought it was an approach that might work well for others who didn’t feel like continuing to ‘feed’ their trench systems).

The vermi-mulch gardens seem to have been hit the hardest, especially now that we seem to be going through some sort of end-of-season drought period. I recently started cleaning up my bean and chard garden and noticed that the mulch zone was very dry, with seemingly few worms in it. Upon closer inspection I realized there were actually lots of worms, but they were very small for the most part, and seemed to be congregating in zones with slightly higher moisture content. I ended up raking up most of the mulch material in that bed and adding it my wooden worm bed and another garden bed where I’ve been consolidating groups of worms. I think it’s going to be fun to see what happens when these worms re-hydrate!

I am certainly not trying to suggest that composting worms can’t be raised in beds associated with gardens, but what I AM now much more aware of is the fact that these beds may need a fair amount of extra food/moisture if you want to provide the worms with anything close to ‘ideal’ living conditions. Obviously maintaining thick layers of straw etc over top can certainly help to reduce evaporation, but it doesn’t provide much protection against the water-sucking potential of all those roots and rootlets!
🙂

I suspect that if you maintain a decent sized windrow of good food/habitat material over top of your trenches, making sure to add new stuff at least once a week, you’d be fine. The vermi-mulch approach is obviously a lot more susceptible to drying out (since all above ground), but I’m sure that if you are diligent enough with topping the beds up with new material (and adding water), the worms would thrive there as well.

For all of you who may have experienced something similar, and are distressed that your worms have ‘disappeared’ – I highly recommend that you start by adding a LOT of wet food/habitat material, assuming you are still growing plants. If it is the end of your growing season however, you may want to try and consolidate your worm population as much as possible – perhaps setting up a new bed dedicated to concentrating (and fattening) as many worms as you can round up, so that they can then be moved to new indoor systems (or even ‘put to bed’ back in your trenches for the winter – something I will certainly be writing more about this fall).

I will be very interested to see what others have to say about this. Any similar findings? Contrary findings? It would be fun to get a discussion going.
8)