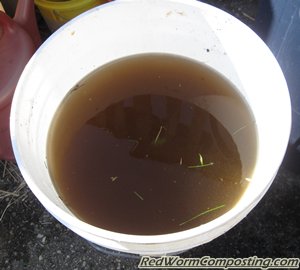 This is a post I meant to write quite some time ago. Back when I first reported on my gardening woes this year (see “Vermicomposting Trenches – 2009 – Update”), someone added a comment suggesting that I use ‘worm tea’ to see if I could help improve the health of the plants. Strangely enough, I had just finished reading an article about a guy up in Alaska who grows world record sized vegetables, and claimed his ‘secret’ was that he uses compost tea religiously.

Needless to say, I felt inspired to go mix up a batch for my plants! It also really made me wonder what on earth I’ve been doing all this time – for whatever reason, I’ve never become serious about worm compost tea. I have loads of high quality vermicompost on-hand, barrels full of rainwater, some molasses in the fridge, and even some old aquarium air bubblers! I guess I figured my trenches and layers of vermi-mulch would provide enough benefit on their own.

Anyway, despite the fact that it was pretty late in the season by the time I clued in, I DID at least make one batch of brew. I decided not to go too crazy with it though, and didn’t end up bothering with the molasses and aeration. 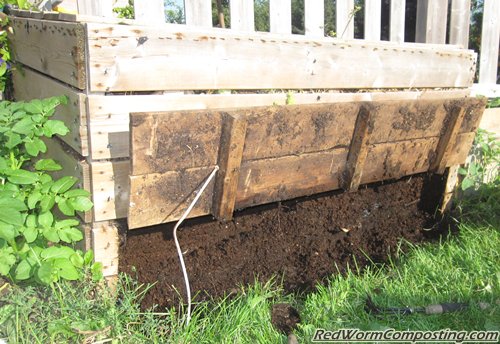 I started by raking some nice vermicompost out from the lower zone in my backyard worm bin. Some of you may recall that my brother and I built a trap door on that bin last year (see “Harvesting My Vermicompost“) – something I’ve been happy about ever since! 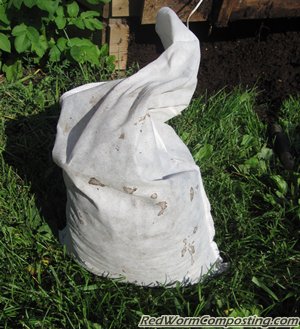 Next, I filled a large ‘breathable’ worm bag with the material. You certainly don’t need a fancy bag for this – any sort of cloth bag, or even nylon stockings should work fine. If you are going to completely immerse the bag, make sure you have a tight knot some the material doesn’t just pour out in the bucket of water.

All I did was constrict the top of the bag with my hand, and dunk the bag repeatedly into one of my water barrels. The vigorous dunking not only helped to get lots of ‘good stuff’ out of the vermicompost and into the water, but it also helped to aerate the mix. 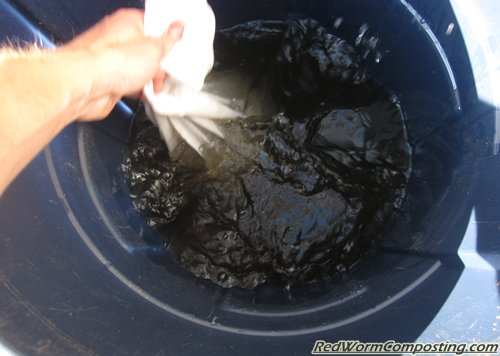 That’s basically it! Once I was finished, I then simply put the mix into a watering can (and perhaps some smaller buckets) and distributed it around my gardens. It’s hard to say what, if any, real benefit this one time application had – but I’m sure that bare minimum, it was at least a ‘souped-up’ (literally – haha) watering for my plants.

The reason I wanted to write about it here was simply to demonstrate that making worm tea does NOT need to be complicated! Sure, the mix probably would have been a bit more beneficial had I added molasses and aerated it for a period of time, but doing so is certainly not critical.

Oh – and don’t forget about the sludgy compost in the bag. Be sure to add that to your garden as well. There will still be some good stuff (and maybe even some worms and cocoons) left in there.

One thing is for sure – next year I am finally going to get really serious about using worm compost tea (starting early in the season), and of course I’ll be writing all about it here!
8)