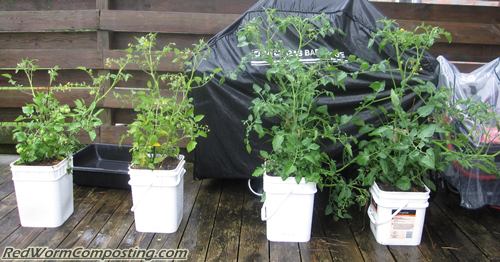 Anyone care to venture a guess as to which pair of buckets were the ones filled with vermicompost (instead of potting soil)?
😉

As per usual, these photos just don’t do the plants justice, but I think it’s safe to say that a different between the treatments is readily apparent. 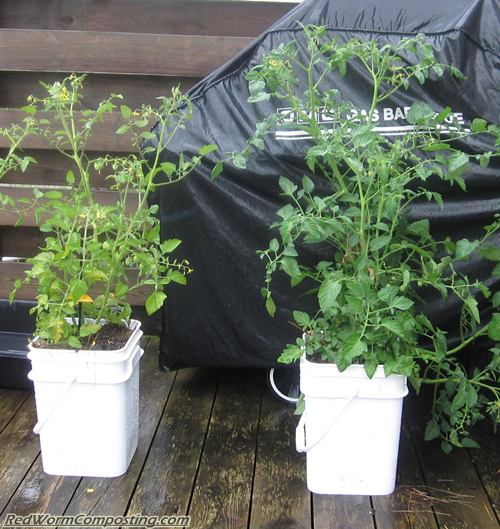 Just as a quick review, the idea here was to provide both treatments with plenty of alpaca manure, but in two of the buckets I added mostly vermicompost (containing lots of Red Worms) and in the other two, mostly “black earth” potting soil (by the way, you can read my first post about the experiment >>HERE<<). What's really interesting is that I'm pretty sure that some Red Worms STILL managed to get into the no-worm treatments, even though they were sitting up on the railing of my deck! It's amazing what they can do during dark, wet conditions! I suspect this because I saw a single Red Worm sitting under one of the no-worm buckets when I moved it for a photo shoot a little while ago (haven't see any since then). Whatever the case, it is safe to say these two treatments are still considerably different from one another. 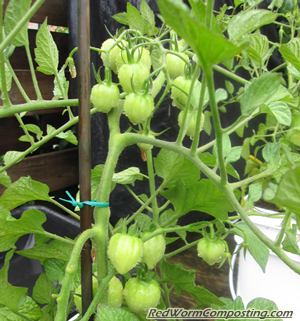 While they may look a little less impressive, the no-worm treatments actually aren’t doing too badly. One of the plants actually has a fair number of tomatoes on it.

I am also being careful not to get TOO excited about the differences, simply because I doubt that the alpaca manure alone is providing all the nutrients these plants need. All I’ve really proven here is that vermicompost has some fertilizer value! If I wanted to show that is has something extra, above and beyond the basic nutrients it is providing, I would have to ensure that all tomatoes were receiving their full compliment of necessary nutrients.

This is what Ohio State University researchers have done in their vermicompost / plant growth trials over the years – and with some pretty amazing results, I might add!

Nevertheless, I still think this qualifies as “pretty cool”! It will be interesting to see how these plants develop from here. Obviously, if all we get from the vermicompost treatment is lush green tomato plants but little in the way of fruit, it will be a tad disappointing (he said in his best unbiased scientist voice – haha!).