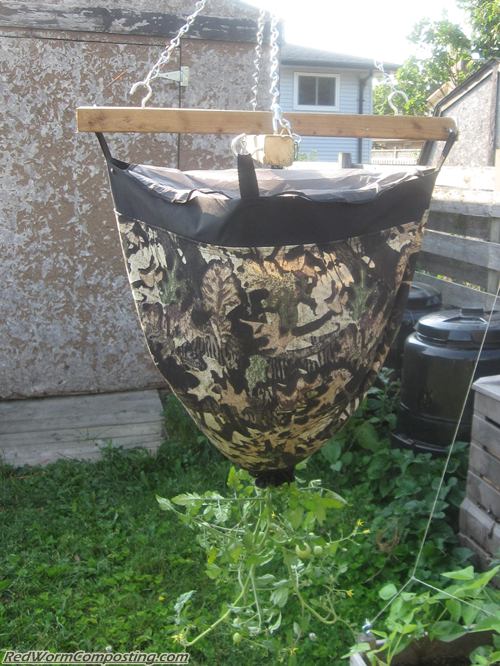 So my “hair-brained” tendencies kicked into over-drive recently (haha)…
It suddenly dawned on me that one of my old Worm Inns (the original design that features a pocket and doesn’t have the zippered screen top) would make a GREAT hanging tomato garden! Unlike regular hanging tomato gardens, the Worm Inn offers a lot of space for the roots – which is not only good for the plant, but also advantageous when you are trying to make it into a “vermi tomato garden“.
Being a hanging system already, and having the nice drawstring opening at the bottom, it almost seems too good to be true (when you are a Worm Head)!
😆

It seemed rather fitting that this system became the “home” for the last of the tomatoes I had in smaller pots (nice to finish with a bit of a flourish, right?). It’s not the most attractive of gardens, I’ll admit, and it became readily apparent that my DIY skills certainly haven’t improved much! (the camo pattern + oversized hardware and chains made me feel like some sort of hunting biker vermicomposter as I put everything together – not that I have anything against bikers who hunt and vermicompost!). But I have to admit, I felt pretty proud of it once I got it hanging nicely, with the tomato plant all set to go (uhhh…grow?)!

The hard part (for me) was building the support frame and getting it to hang properly. Putting the tomato plant in was unbelievably easy! Far easier, in fact, than when I set up a similar system using a normal hanging tomato system (more on that in a minute)!

The only downside of the endeavor was that it was challenging to get good photos while I set everything up, but I’m confident that the simplicity of the process will become clear via my written description and the photos I have included.

Once the plant had been tightened into the bottom of the Inn, I simply filled it most of the way full with a wormy vermicompost mix excavated from one of my outdoor beds. I decided not to bother with soil at all, since it’s become clear in some of my other vermi-tomato systems that the plants don’t really need it, and in fact, that the coarse vermicompost is a much better growth medium (duh!). 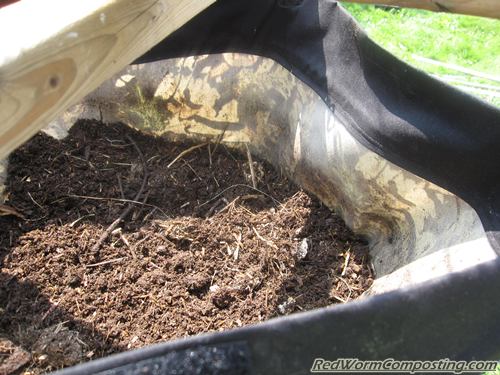 After that, I simply added a layer of alpaca manure (mixed with a fair amount of straw), watered it, and attached the screen top via the velcro strips. 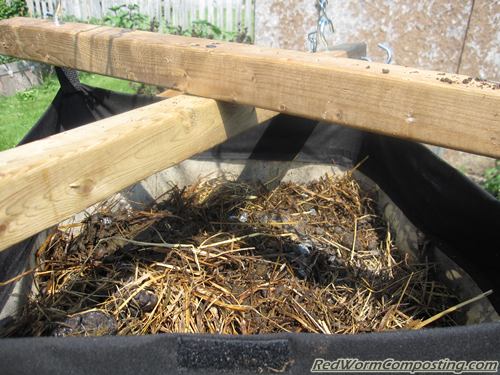 As of this morning (less than 24 hours after set-up), the plant is looking good, with its leaves and branches definitely starting to point up towards the sun.

On a related note…

About a week and a half ago, I had an interesting meeting with a person who sells rain barrels and various types of composters here in Ontario. We had a great chat in my backyard (with me showing off my hair-brained vermi-projects of course! haha) and just before he left he happened to mention a hanging tomato garden kit he was planning to start marketing. When he saw my eyes light up at the mention of this (you know me and tomato gardening!! haha), he pulled one from his car and told me to “play with it”!

[Have I mentioned lately that I LOVE what I do?!]

A hanging vermi-garden was the ONE thing I hadn’t set up yet (but was itching to try), although I had been close to purchasing one of the more typical hanging tomato kits from the store.

After thanking him profusely, and seeing him off on his way, I immediately started thinking about how I could turn it into a worm-powered system, rather than using it as directed. Speaking of which, I certainly smirked to myself when I came across the bit in the instructions that said something along the lines of “use potting soil NOT compost in this system”!

I was very impressed with the design (and size) of the system, and the fact that it even came complete with a self watering system (which, alas, I was not able to use due to space constraints)!

Long story short, I got that system set up later that same day and the tomato I planted seems to be doing just fine (after an initial period of decline). 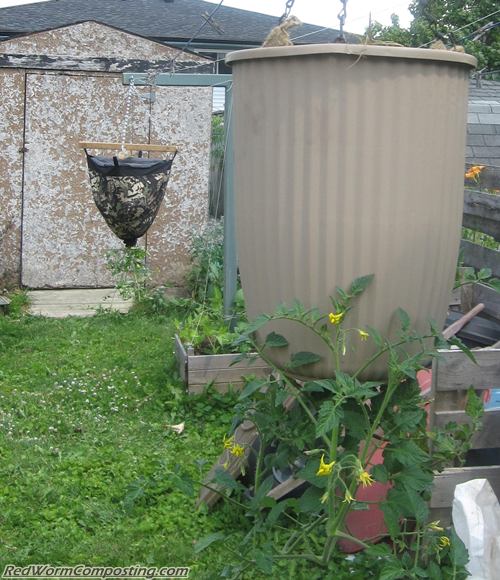 Comparing the two hanging systems, there is NO doubt that the Worm Inn will have the greatest chance of success. Aside from the significantly greater volume, it is also a much more “breathable” system so it should provide a much more worm-friendly environment for all those wigglers.

Whatever the case may be, I will certainly keep everyone posted on my hanging tomato vermi-adventures!
8)