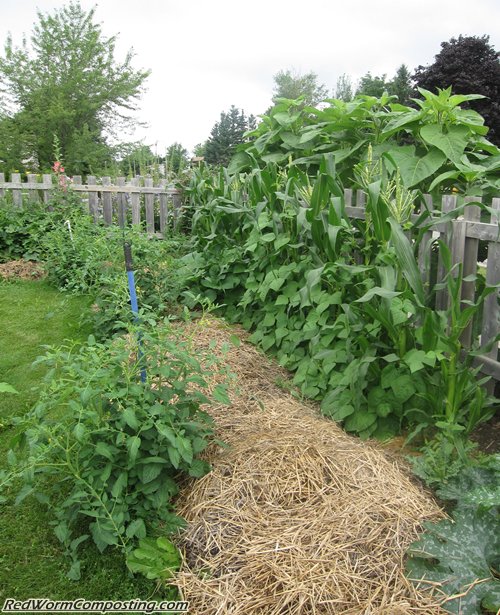 It suddenly dawned on me this morning that I have yet to write anything about my vermicomposting trenches this season! This is my favorite vermicomposting / gardening system after all, so I think it is time to bring everyone up to speed on this front.

I should mention right off the bat that most of my “trenches” are much more like windrows, due to an accumulation of rich vermicompost over time. Remember, I am not harvesting vermicompost from these beds – I am allowing plants to grow nearby and access the compost directly. What I AM harvesting from the beds, however, are Red Worms for my own small, local worm business – and in an effort to keep the ‘worm herd’ thriving I have been adding a fair amount of manure (primarily alpaca and horse manure), which certainly contributes to the mounding of the beds as well. 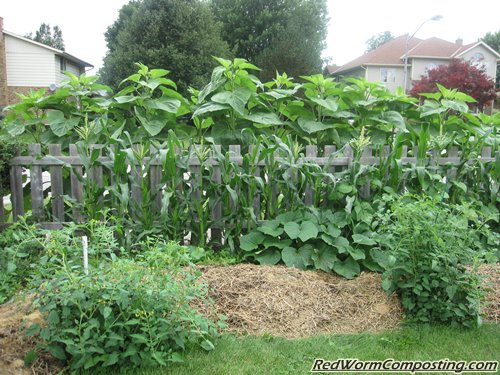 This year has been an amazing growing season in comparison to last year (for both worms AND plants). We’ve had lots of sun, lots of heat, but also lots of rain – so everything has been doing very well. I’ve included a shot taken back in June, showing the same garden zone shown in the first two photos above (taken this morning). As you can see, the plants have grown considerably in the last month!
8) 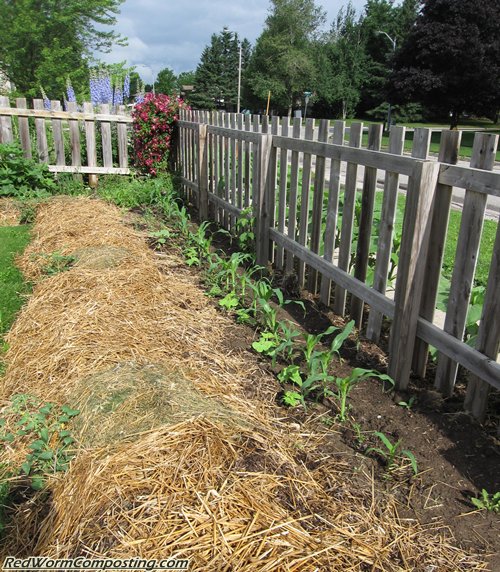 Some of you may recall that for the last couple of seasons, I have been growing tomatoes in the stretch of garden pictured above. Last year was NOT a great year for growing tomatoes, and I ended up with a pretty bad infestation of some sort of fungal leave disease (written about here: “Vermicomposting Trenches – 2009 – Update“), so I wanted to play it a little bit safe by basically keeping tomatoes out of that bed (pretty well the ONLY bed I don’t have tomatoes growing in this year – haha!). I also thought it would be fun to grow some corn along to fence so as to add some depth to my all-natural privacy fence!

Speaking of which…as you can tell, the sunflowers (of the “Kong” variety) are doing great on the other side of my fence. They are not really associated with my trench beds at all, but I have little doubt that they are still benefiting from the overall fertility of my yard these days. I will write more about them in another post.

Other plants growing in the beds adjacent to my trench windrows include zucchini (yellow and green), pumpkin, several varieties of pole beans, raspberries, and of course tomatoes! My sandbox raised bed garden is actually almost entirely dedicated to tomato plants this year, but I do have a few asparagus plants in there now as well. This is the one bed where the trench still actually looks like a trench. I have a huge beefsteak tomato plant (on the left in photo below – of course, the pic just doesn’t do it justice) which seems to really benefiting from the trench, and contributing to the reduction in volume that this stretch of trench seems to be experiencing (even though I’ve been adding a LOT of materials – alpaca manure, homemade manure, food waste etc). 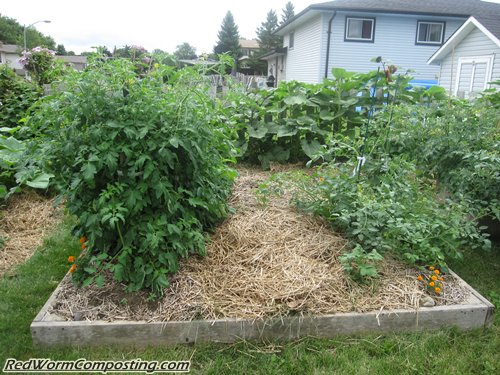 Given the fact that I had so many tomato plants in need of a home earlier in the season, I needed to get a bit more creative with my plantings, above and beyond simply putting lots of them in my regular trench garden beds. I thought it would be interesting to see what happened if I literally planted some of them right in the trench itself, and on the lawn side. If you look back at the first three pictures you should see what I mean.

Of course, I couldn’t go TOO crazy with this approach, since I still needed to access the beds to get worms, add new material etc, so I ended up spacing them about 10 feet or so apart. As mentioned, a lot of manure has been added to these beds (and I have little doubt that the tomatoes have been benefiting from that), but I have also been adding a fair amount of food waste and grass clippings directly in behind each trench tomato plant. Not too surprisingly, these plants seem to be doing quite a bit better than the other ones (of the same variety) being grown next to the trench, but in the actual garden.

I’ve been pretty lazy with my approach to adding food waste during the last couple of months. Rather than bothering to make up a nice batch of homemade manure, I’ve simply tossed my bags of food waste (and shredded cardboard) into my deep freezer for awhile, and the frozen waste ball has then buried behind the plants. 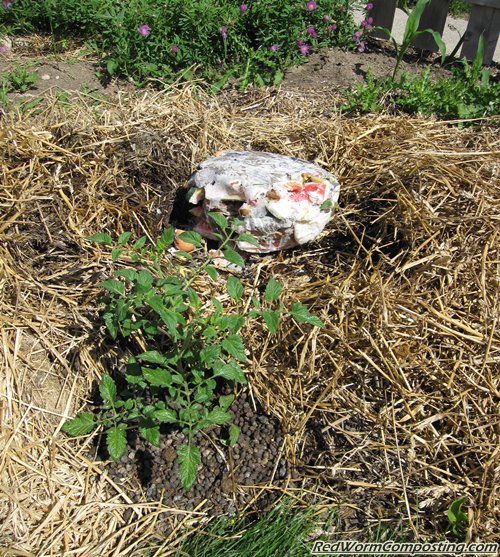 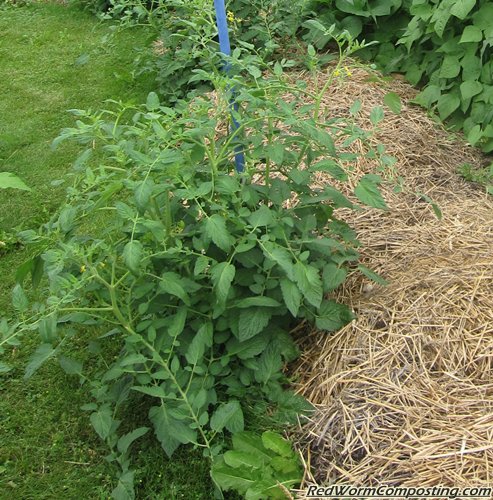 Once the waste materials thaw out, they seem to all but vanish in a very short period of time! I suspect there are quite a lot more critters apart from worms benefiting from the addition of this stuff!

Anyway, I will definitely write more about my trench beds a bit later in the season (to let everyone know how everything turned out) – hopefully this has been enough to provide everyone with a decent idea of what I’m up to thus far!
8)